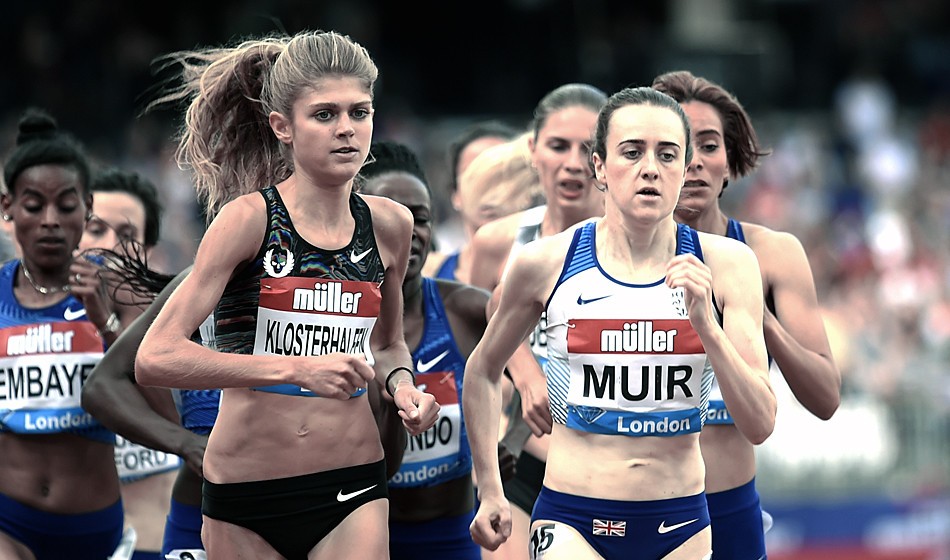 The early pace was a little on the slow side with Hannah Segrave running the first two laps in 65.21 and 2:11.03. The third lap was slightly quicker as Muir led past 1200m in 3:15.03 with Konstanze Klosterhalfen the only athlete able to stay close as Muir opened up.

In the last 200m, Muir began to edge clear before she pulled well away as the German wilted in the closing stages.

Muir’s last 800m was around 2:02 and she said: “It may have looked easy, but it wasn’t! I didn’t realise I ran a 57-second last lap and I’m so, so happy about that. The girls are really strong and I know that my advantage is in that kick, so I just sat in there and tried to take it easy. It was all about winning today and I did that.”

She added: “London is a really fast track and it’s always a great atmosphere. The conditions are usually pretty good. It was a little bit windy today, but the whole vibe of the place is really special and it makes athletes raise their game. It’s great to have so much competition. My goal now is to win a medal in Doha.”

In third, Gabriela Debues-Stafford set a Canadian record 4:00.26. In sixth, Britain’s Sarah McDonald set a PB 4:00.46 while Jemma Reekie – Muir’s training partner and the European under-23 double gold medallist – broke new ground with a 4:02.09 in seventh.

The heats did not go well for UK athletes. Cindy Ofili was sixth in heat one in 13.24 while Alicia Barrett was disqualified and in heat two and Yasmin Miller was last in 13.91.

In the final, Williams was even quicker as she smashed Brown’s national record with 12.32 to win by over two metres from Nia Ali’s 12.57. That moved her to seventh all-time.

Williams (pictured below) said: “I am thrilled with that. My aim was always to run fast. It has been coming all season and it was just about when. This track is a fast track and the fact that we get two opportunities because of the heats you can fix what you did wrong ready for the final.” 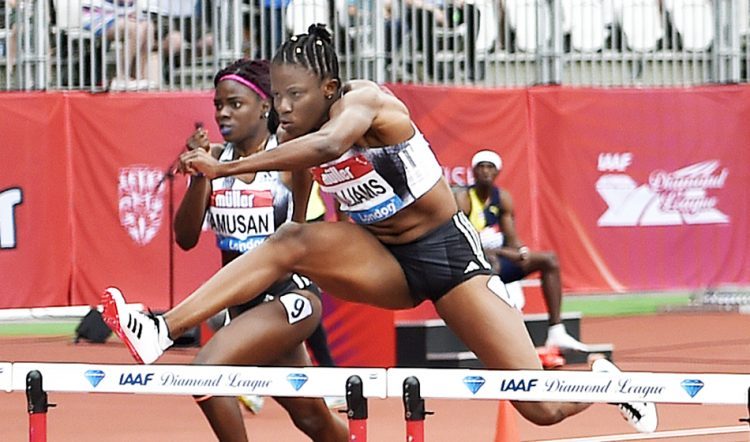 The 400m saw more success for Jamaica as Shericka Jackson finished strongly to win in 50.59 from team-mate Stephenie McPherson (50.74), but both had to work incredibly hard to catch Laviai Nielsen, who started fast and only lost the lead in the last 30 metres. The Briton’s reward was a big PB 50.83 as she moves to 12th all-time in the UK.

She said: “I’m absolutely over the moon. It’s a time I knew I could do, but it was just a matter of getting the competitions in and being competitive. This is my favourite place to run. Every time I’m here, the crowd just gives me goosebumps and I get a lift I just can’t describe. I just want to race here all the time.”

A clear third was Beth Dobbin, who improved her Scottish record to 22.50.

Dobbin said: “I’m over the moon with that. This time last year I missed the Anniversary Games because I had a shift at work, so to now be a full-time athlete, racing against Olympic champions, it’s just a dream come true. I was racing against my idols so I am absolutely buzzing. I didn’t expect to be in PB shape until the trials because every year we focus on peaking for trials so to run a PB here today it means a lot.”

At the back of the field, Bianca Williams just got the better of Katrina Johnson-Thompson with both running 23.19. Many thought the latter would go much faster as she normally runs the event at the end of the first day of the heptathlon and has run 22.79.

Jamaica also won the final event of the day, the 4x100m thanks to a superb anchor leg from Shelly-Ann Fraser-Pryce. She came from a long way back to pip Britain’s Daryll Neita.

Jamaica won in 42.29 with Britain second in a season’s best 42.30, which should go a long way to securing Doha qualification.

In the javelin, former European champion Tatsiana Khaladovich won a tight contest with a third round 66.10m with Kelsey Barber a close second with a final 65.85m.

The Russian Anzhelika Sidorova won an exciting pole vault on countback with 4.75m.

Reigning world champion Katerina Stefanidi matched that but paid for a first-time failure at her opening height of 4.55m as the leading duo both failed at 4.82m.

Holly Bradshaw was third with a vault of 4.65m and was unlucky with her final vault of 4.75m.

» For news from the men’s events at the Anniversary Games, see here.