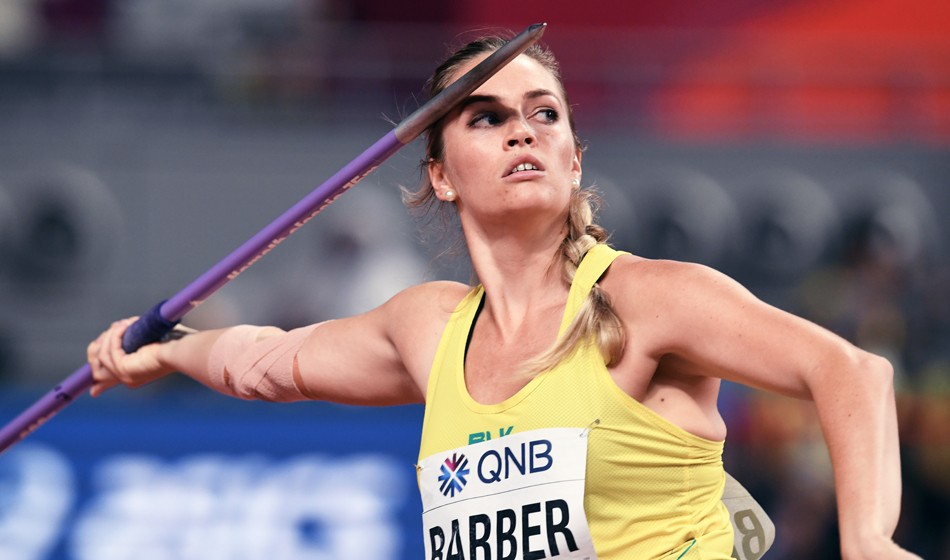 Going into the final round of the women’s world javelin final on Tuesday night in Doha, Kelsey Barber was lying in fourth place with Chinese duo Shiying Liu and Lyu Huihui set for a one-two.

“Going into the sixth round it was a case of clearing my mind and believing there was more there,” Barber said. “It’s one thing to say it and believe it but another to actually do it.”

Barber believed and she delivered with a 66.56m throw to go into the lead. It was three metres better than she had thrown in the first five rounds and the 28-year-old’s face was full of joy as the enormity of what she had done sank in.

“I feel really proud to win in the Australian colours today and hopefully it’ll put track and field on the map a little bit more in my country,” she said, adding that taking her run-up back slightly gave her more space and was the technical tweak needed to give her gold.

Barber threw 67.70m in Lucerne earlier this year to go No.12 all-time. Otherwise she has been the perennial runner-up during 2019 – in Lausanne, Zurich’s Diamond League final and the Anniversary Games in London.

World No.1 Lyu Huihui led in the first four rounds with 65.06m in round two. But her team-mate Shiying Liu threw 65.88m in the fifth round to take the lead. At this stage it looked set for a Chinese gold and silver, but Barber passed them both with her big winning effort in the last round.

In the final round neither Huihui nor Shiying could improve, which meant Barber won Australia’s first world javelin title.

World javelin champion Kelsey Barber of Australia with silver and bronze medallists Shiying Liu & Lyu Huihui of China. "I feel really proud to win the Australian colours today and hopefully it’ll put track and field on the map a little bit more in my country," she says. pic.twitter.com/qgydxBJKj0

In his quest for a fourth successive world title, Pawel Fadjek of Poland led the hammer qualifiers with 79.24m from European champion Wojciech Nowicki’s 77.89m.

There was success for Britain’s Nick Miller, too, as the Commonwealth champion threw 76.26m in the third round to qualify as 10th of the 12 for Wednesday’s final.