Karsten Warholm on top of the world again 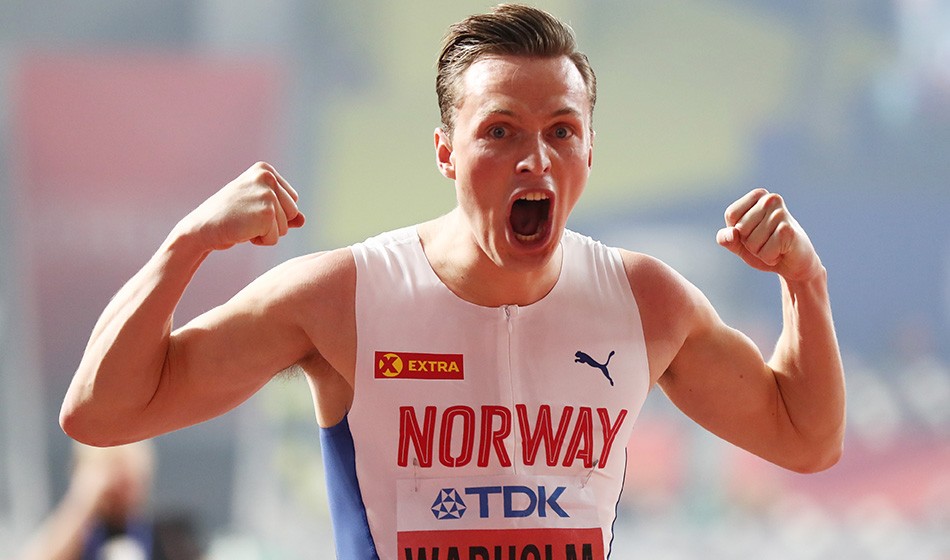 When Karsten Warholm screamed his way into the global athletics consciousness with his gold medal-winning performance in the London rain, he took everyone by surprise.

This time, in Doha, the world was watching and the Norwegian had a sizeable target on his back but still he found a way to finish first.

There was no world record in what had been one of the most eagerly awaited races of these championships, given that it featured three of the four fastest men in history, but instead came a convincing win for Warholm in a time of 47.42 ahead of his biggest foes this year.

American Rai Benjamin clocked 47.66 for silver and Qatari Abderrahman Samba was cheered to bronze in 48.03 by the home support who had remained for the evening’s final event at the Khalifa Stadium.

Both Benjamin, who admitted to having seriously considered pulling out of the race recently following a fall in training three weeks ago which left him with a badly bruised bone, and Samba (hamstring) have had injury worries to deal with this year yet still Warholm was pushed all the way.

This was certainly no easy task for the 23-year-old.

After Warholm’s European record-breaking run of 46.92 in Zurich back in August, and the personal best of 46.98 which Benjamin and Samba both share, hopes of a fast race had been high.

That certainly appeared to be on the defending champion’s mind given that, once the now customary pre-track final light show had been completed, he reacted first to the gun and set off like a rocket.

Benjamin was with him, however, while Turkish 2017 silver medallist Yasmani Copello and Commonwealth champion Kyron McMaster were also in the medal hunt.

Warholm began to exert some pressure, however, and create a lead entering the final straight that he was not to relinquish. When Benjamin stumbled over the final hurdle, the destination of the gold medal was settled.

Samba left it late to charge for the line but his closing surge was enough to edge out McMaster by 0.07 of a second, while Copello (48.25) faded to sixth and American TJ Holmes was fifth in 48.20.

Comment from 400m hurdles champion Karsten Warholm and reaction from bronze medallist Abderrahman Samba 🐺 which gets a laugh from the press conference crowd #WorldAthleticsChamps pic.twitter.com/5hdu4Dn8UI

One of Warholm’s trademarks is his evident confidence, however he did admit to some pre-race nerves.

“It’s easy to say afterwards that this was going to happen but I wasn’t too sure, to be honest,” he said. “This was a very hard race. I had a pain in my chest, I thought I was going to die but here I am world champion. This is only the beginning for all of us.

“Tomorrow I’ve got to get up and work again. Norway is only a small country so to be showing up on the world stage is amazing.”

Benjamin’s performance was all the more creditable given his interrupted build-up and he said: “ It’s been hard for me but in the rounds I just sucked it up and in the end I got a silver medal. I wanted gold but I was just happy to be out there. We were all chasing the world record and I chopped at three or four hurdles. It just wasn’t the moment.”