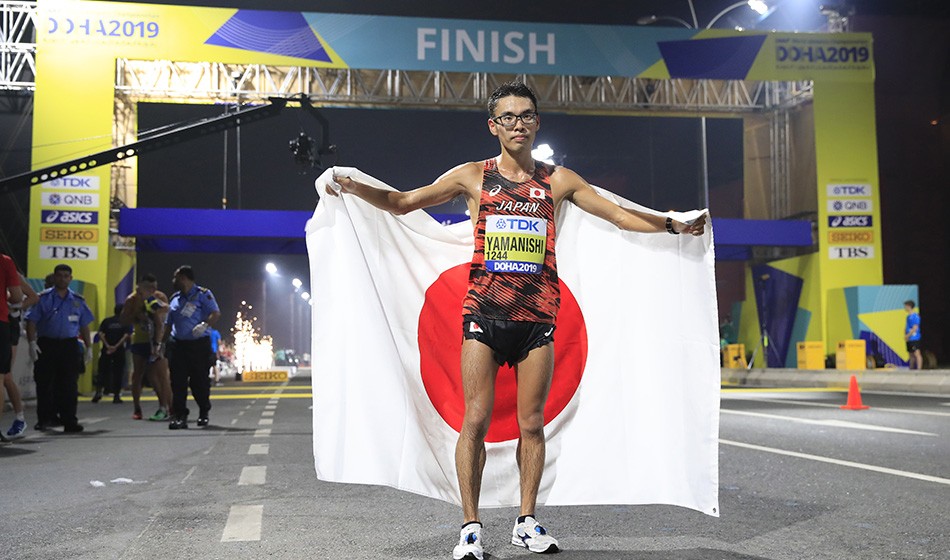 Toshikazu Yamanishi won Japan’s first ever 20km walk medal and completed the men’s walk double for his nation with a dominating performance.

He was 13th amongst the pack in 22:28 at 5km with Australia’s Commonwealth champion Dane Bird-Smith the official leader in 22:26.

At this stage world junior champion Callum Wilkinson, who briefly led the race, was ninth in 44:29 while Tom Bosworth moving through after a steady start to 14th in 44:34.

The Japanese was still out on his own at 15km in 65:28 (a much faster 21:12) but Sweden’s Perseus Karlstrom was moving even quicker and was now 15 seconds back and he had a 12-second gap on a group of three – Turkey’s Salih Korkmaz, Vasiliy Mizinov and Koki Ikeda who appeared to be battling for the bronze.

Chasing them was Bosworth (66:09) after a 21:40 split and he had overtaken Wilkinson who was seventh (66:14) although the latter was shortly given a third red card and had to first sit in the two-minute penalty zone before another card meant disqualification.

Yamanishi found the last few kilometres hard but was keen to go to next year’s Olympics as world champion and a 21:06 split gave him gold in 1:26:34, almost nine minutes outside his PB set in March.

The former world youth champion was competing in his biggest event as a senior and 15 seconds back came another emerging athlete, the Russian Mizinov, who last year won European bronze and this year took the European under-23 title.

His last 5km was a very swift 20:53 and he caught a fading Karlstrom in the last few kilometres, who nevertheless held on to win Sweden’s first ever medal.

Christopher Linke, who was not shown in the original result and was not evident on the result at 15km, was awarded fourth place while Bosworth held on for a magnificent seventh in 1:29:34 – the first top eight finish by a British race walker at the IAAF World Championships.

Although he slowed to a 23:25 last 5km split, it made up for his London disappointment when he was disqualified while vying for the title and it comes after an injury-hit summer for the Leeds-based athlete.

“I am over the moon,” he said. “No Brit has ever finished in the top eight so for me that was the second target, the first being a medal. I’ve now got top eight Olympics, Europeans, Commonwealths and now worlds – I have got the set – and after the year I have had, it is everything.”

The Briton added: “It hasn’t really sunk in but it has taken a lot of hard work and I know everyone talks about medals but, for me, this is massive. It is the equivalent of being a world finalist. It really does make every single day and all those commitments, which we choose to do, worth it.”

Altogether 40 of the 52 starters finished with five disqualified and a further seven dropping out.