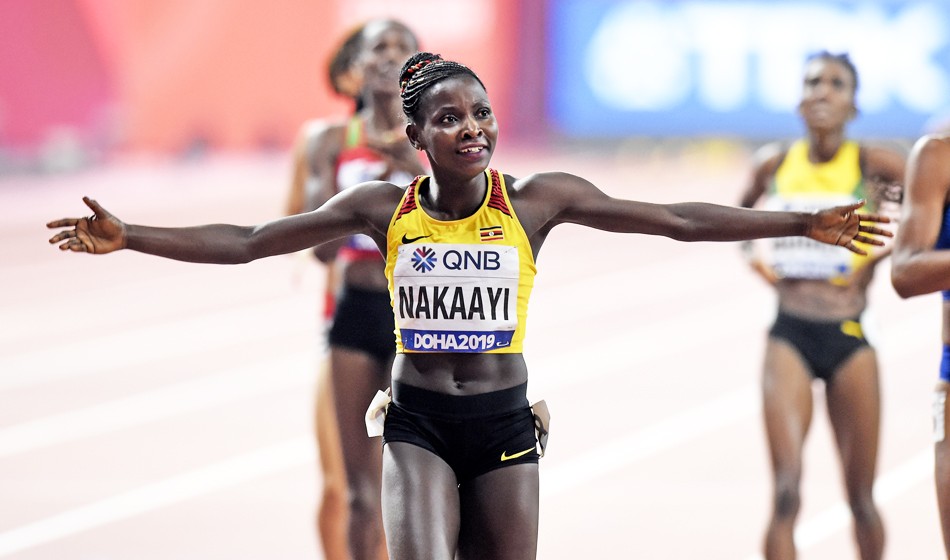 This was Halimah Nakaayi’s first global track final and she was only eighth in the Diamond League in Birmingham a few weeks ago, but the 24-year-old struck 800m gold in a Ugandan record of 1:58.04 as she out-kicked US duo Raevyn Rogers and Ajee’ Wilson.

The front-running Wilson led through the bell in 57.94 but faded in the home straight as Nakaayi stormed past. Finishing quicker than anyone, though, Rogers came from seventh with 100m to go to runner-up in 1:58.18 as Wilson took bronze and Nakaayi’s training partner Winnie Nanyondo was fourth and 2013 world champion Eunice Sum of Kenya fifth.

“In every competition I’ve been improving a bit and by now I was in good shape,” said Nakaayi, explaining her advance in form.

“I expected this because I have a big team that has been preparing me for this for a long time.”

On the absence of Caster Semenya and other DSD athletes, the winner said: “I always believe in change. Once the change is made then I focus what is on the ground. I couldn’t focus on Caster or (Francine) Nyonsaba or anyone as they were not here.”

Runner-up Rogers, 23, explained her strong finish, saying: “I just had to be patient. Running on the same track in May helped me test the waters and I carried that experience into this weekend. That, together with going through the rounds, helped contribute to that last 150m. The whole experience is very surreal to me just now.”

Wilson was many people’s favourite to win but she said she was flat out with 50-60m to go and had nothing more to give.