Gold for Kare Adenegan and Vanessa Wallace in Berlin 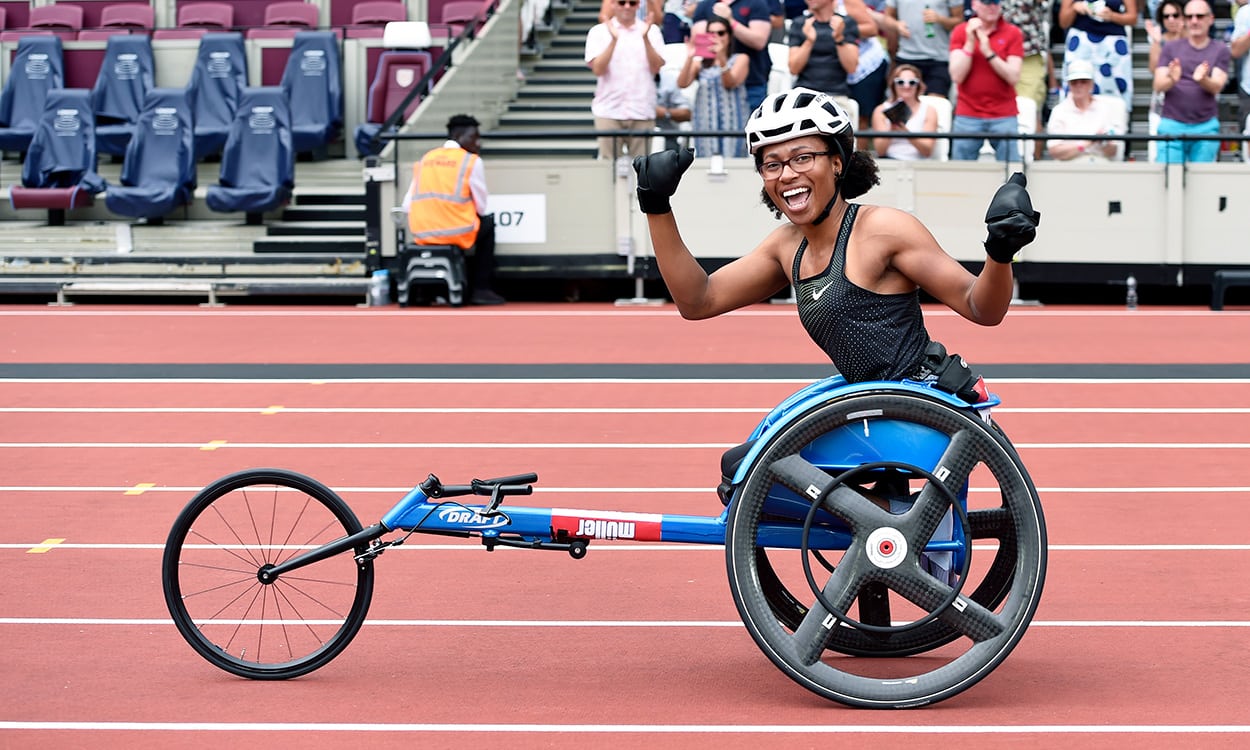 Britain gained a one-two in the T34 women’s 100m as they enjoyed another successful day at the World Para Athletics European Championships in Berlin.

Kare Adenegan had defeated world and Paralympic champion Hannah Cockroft in the London Anniversary Games, yet Cockroft had never lost a major championships.

But on Wednesday in Berlin, Adenegan dominated throughout and won easily in a championship record 17.38 from Cockroft’s 17.95.

Britain’s Vanessa Wallace won the F34 shot to gain her first major international medal. She threw 7.45m to give her gold over home favourite, Marie Braemer-Skowronek.

Only three competed in the F32 club throw and Britain’s Stephen Miller finished a close second with 29.78m to finish second to Poland’s Maciej’s 31.12m.

For much of the T35 100m – which also only had two competitors – Jordan Howe looked to be on for gold after a bullet start but he faded and was caught by quick-finishing Ivor Tsvietov.

Ukraine also won golds through Anastasiia Moskalenko’s F32 shot of 5.65m, Oleksandr Lytvynenko’s T36 long jump of 5.48m and Natallia Kobzar’s 65.24 in the T37 400m, while they also took the T13 200m gold by over half a second through Leilia Adzhametova’s 24.78. All four marks were championships records.

In the T54 400m, Finland’s Pekka Tahti broke the championship record, winning easily in 46.73 with Dillon Labrooy of Britain third in 51.15 (European record-holder Richard Chiassaro was a non-starter due to illness).

In the T37 200m, Britain’s Rhys Jones looked a likely winner as he came into the straight but he was run down by Poland’s Michal Kotkowski’s 24.10. Jones dropped to fourth in the closing stages in 24.88.

Michal Derus was a clear winner of the T47 100m to give Poland another gold in a championships best 10.77. James Arnott missed out on a medal by one hundredth of a second in running 11.37 in fourth.

Another Polish success went the way of Renate Sliwinska who set a world record 8.53m in the women’s F40 shot.

There was an impressive win in the T64 200m for Germany’s Felix Streng who ran a championship record 21.88 to win by over a second.

Netherlands’ other gold came from Stefan Rusch, who won the T34 100m in 16.14 with Ben Rowlings fourth.

Sandro Correia Baessa won the men’s T20 400m in a championships record 49.60 and Carina Paim made it a Portuguese double over one lap with an European record 57.29 in the women’s T20 event.

Spain’s Sara Martinez won the T12 long jump with a 5.42m leap. They also had track success through Lia Quintana Beel’s 28.56 in the T11 200m which she took by one hundredth of a second and Lorenzo Albaladejo Martinez who won the T38 400m in 55.71 with Britain’s James Patterson second in 56.82.

Switzerland’s Manuela Schaar continued her dominance of the T54 wheelchair event with gold in the 1500m in a championship best of 3:33.42 and she won by exactly 15 seconds.