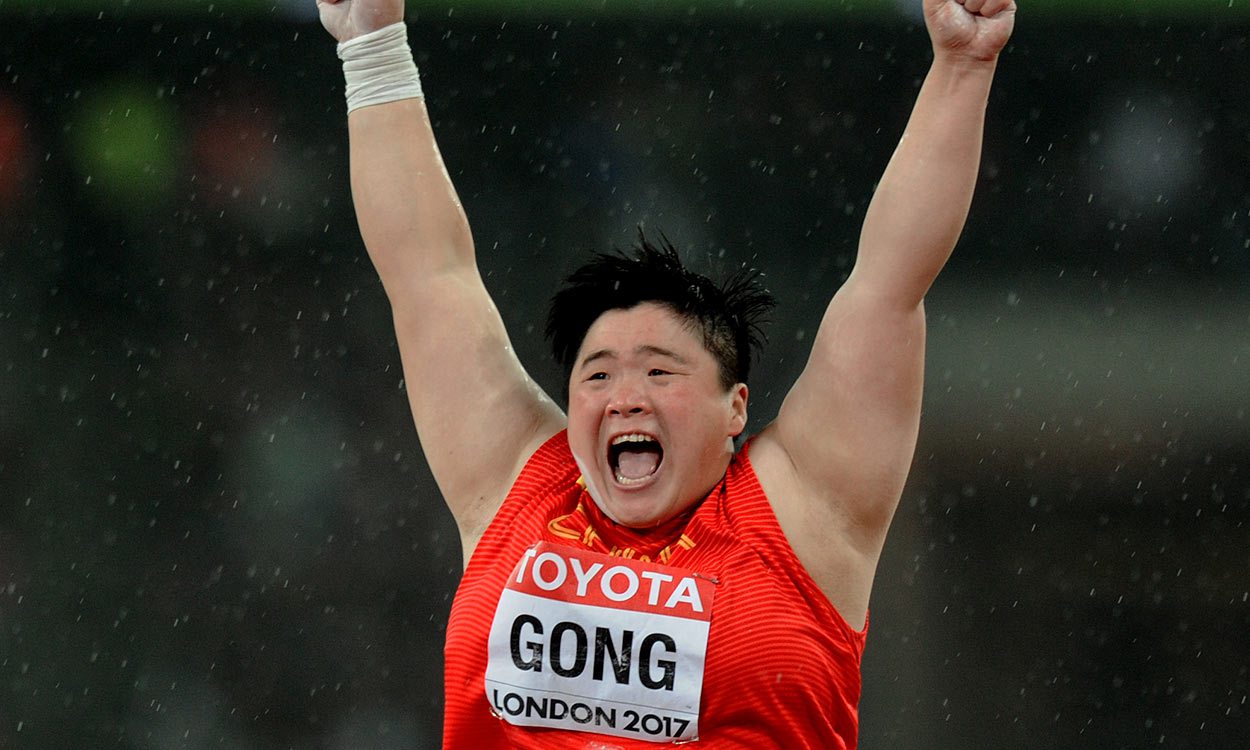 The women’s shot put world title returned to China for the first time in almost a quarter of a century. Gong Lijiao, 28, succeeded 1991 and 1993 champion Huang Zhihong to take gold ahead of Anita Márton of Hungary and Michelle Carter of the United States – and she did it on an evening of incessant rain.

“Ever since I started my career my goal was to be world champion and now I’ve done it in London,” said Gong, who led throughout with five throws over 19 metres and a winning mark of 19.94m in the fifth round.

Gong was delighted to follow in the footsteps of Huang, too, who in 1991 became Asia’s first-ever world outdoor track and field gold medallist.

“It’s a very special moment for me,” said Gong. “Of course, the rain affected the competition and that is the reason we didn’t go past 20 metres tonight.”

Runner-up Márton threw 19.49m and Carter managed 18.87m as Danniel Thomas-Dodd of Jamaica and Yang Gao of China were fourth and fifth.

On her rivals, Gong said: “We’ve been competing for many years and I believe we have the same levels of strength in the competition but tonight I am the luckiest one. It’s because of my rivals that the competition is more excellent.”

Gong has been the perennial bridesmaid at major championships. Prior to London 2017 she has won minor medals at two Olympic Games and three world championships, while she finished fourth in the Rio Olympics last year as Carter took gold.

The Chinese athlete has been unbeaten in 2017, though, and will enjoy her podium moment this week in the British capital after missing it in London 2012 due to receiving silver only after an upgrade following two DQs.

“My next goal is the Tokyo Olympics,” added Gong. “My memories of London 2012 are mixed because I was third originally, then I was moved to second later. I didn’t like the way that happened. So I am glad to show all the hard work I’ve done in the past with this gold medal.”

Carter refused to blame the wet conditions for her defeat. She said: “Conditions were definitely cold and rainy. I’m from Texas and it’s really hot there. But it’s part of the competition. Every day is different. We’re professionals and every day we are prepared to get the job done.”

The American added: “I don’t think the weather affected me that much. It’s more mental than anything else. The ring is still the same and the concrete is well made so we don’t have to worry about falling around. Today is what was meant to happen and I was happy to get on to the podium and add another medal for Team USA.

“Of course I would have liked to win a medal – the other ladies had a great competition and performed very well. As for the future, I’m definitely not retiring and I think I have another gold medal in me at some stage.”

Márton, meanwhile, was delighted, saying: “I’m so happy now. That was my dream to win a medal in a wold championship.

“I wanted to throw a new Hungarian record, which is 19.87m, and I wanted to throw over 20 metres but the weather wasn’t good. I hope to do it in the Diamond League final in Zurich and maybe two or three more competitions in Zurich.”