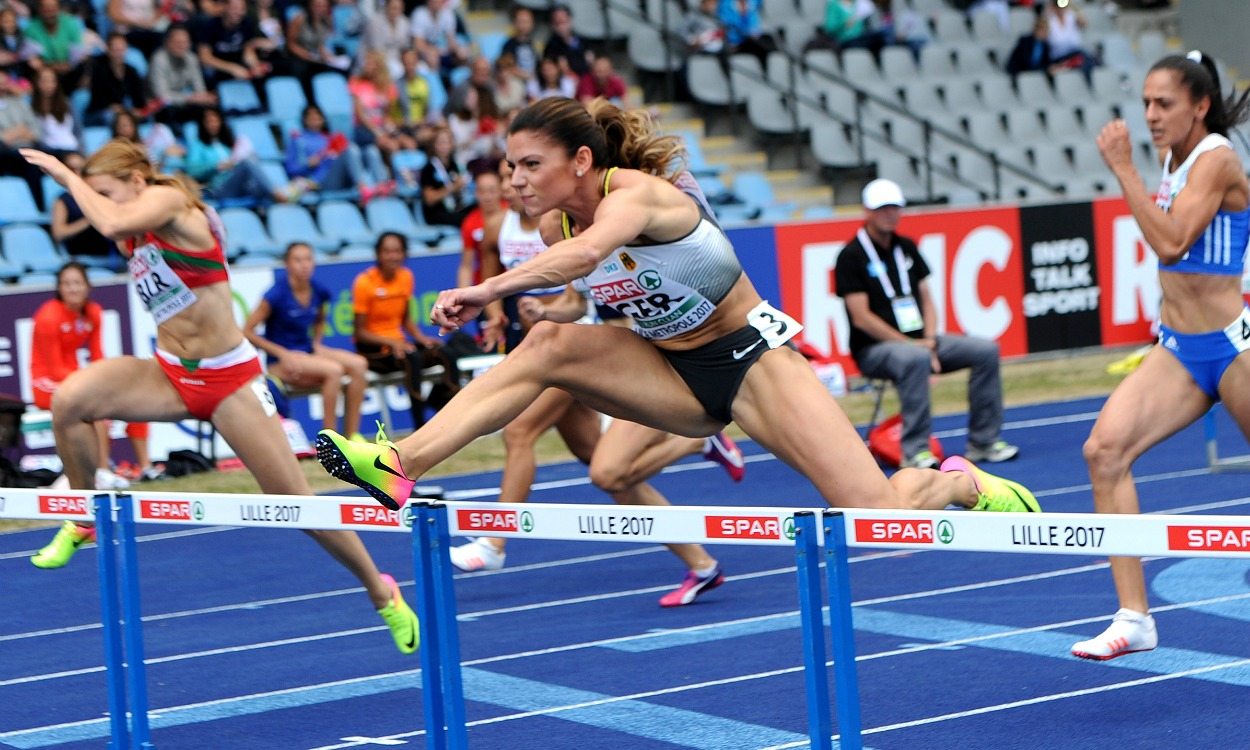 With a dominating performance in Lille, Germany regain the Super League trophy while Britain finish fourth

German athletes were crowned kings and queens of Europe as they won the Super League division of the European Team Championships in the French city of Lille.

A Great Britain and Northern Ireland team that used the event to blood a number of promising youngsters produced a number of fine results but there was frustration at the end of the weekend when they were nudged out of an overall podium position by France after a disastrous men’s 4x400m.

Germany won the event overall in emphatic style with a score of 321.5 ahead of Poland with 295. In third, France scored 270 to pip Britain by one point after coming second in the men’s 4x400m A-race as Britain fell back to sixth.

In a bizarre end to the weekend, the top three teams in the B-race in the men’s 4x400m – Spain, Netherlands and Czech Republic – were quicker than the A-race winners Poland and runners-up France. So it meant France finished fifth in the men’s 4x400m standings overall with Britain an underpar ninth.

It was enough to see France squeeze past Britain into the overall Super League third-place position that GB had held all day, while behind the top four the battle for places saw Spain finish fifth followed by Ukraine, Italy, Czech Republic, Greece, Belarus and Netherlands.

The latter two teams will be relegated to the first division for 2018 along with Russia, who won this event from 2010-13 and again in 2015 but were barred from competing this year due to their general athletics ban.

In a quest to repeat their recent Super League victories in 2009 and 2014, Germany led the contest going into the final day ahead of Poland and Britain after great performances on Saturday.

“It was a great result for the team,” said the winner. ”I was a little tired to begin with and wasn’t really in it, but with the cheering from the crowd I managed to pull out my best jump.”

Robert Harting showed why he is so often the talisman of the German squad by winning an exciting men’s discus with 66.30m from Poland’s Robert Urbanek. Zane Duquemin of Britain was fifth with 61.23m.

Triple jumper Max Hess was another German winner as they flexed their muscles over their rivals. Hess jumped 17.02m but the event saw one of the best British performances of the day as Ben Williams, the 2009 world youth champion, jumped a season’s best of 16.73m for second place.

“It was my first GB vest in six years so it was awesome to put on these colours again,” said Williams.

Fittingly it came 22 years to the day after Jonathan Edwards jumped the longest mark in history – a wind-assisted 18.43m – at the European Cup in the same French city.

There was controversy in the men’s 800m as the runners had to weave around a large box that officials had accidentally left in the inside lane with 300m to go.

Soon afterwards, Adam Kszczot of Poland barged his way through the inside of the track and into the lead and won the race in 1:47.09, although he was later disqualified, which meant Thijmen Kupers of Netherlands was awarded maximum points, with Britain’s James Bowness third.

“The big black box caused some stress and was crazy,” said Kszczot.

There was no doubting Konstance Klosterhalfen’s win in the women’s 1500m as the youngster surged into the lead with a mid-race burst and won in 4:09.57 to give Germany even more points.

“I used a different techniques compared to other races. I’m happy to have won some more points for Germany,” she said, in a race that saw Rhianwedd Price finish ninth for Britain.

Maria Belibasaki of Greece took the women’s 200m as Finette Agyapong of GB was fourth. The winner’s time originally came up as 20.07 but after judges checked the timing equipment it was later announced as 22.7.

Kamila Licwinko of Poland took the women’s high jump with 1.97m but there was disappointment for Morgan Lake as the Briton managed just 1.85m for seventh equal.

In the throws, Aliona Dubitskaya of Belarus took full points in the women’s shot with 18.39m as Amelia Strickler was 10th with 15.40m.

Pawel Fajdek of Poland took the men’s hammer with 78.29m as Nick Miller put in a fine performance for Britain as he threw 76.65m for third.

Barbora Spotakova of the Czech Republic won the women’s javelin with 65.14m as Jo Blair of GB finished ninth with 50.61m.

With the British Team Trials next weekend for August’s IAAF World Championships in London, the GB team used the event to blood some youngsters. One of these was Alicia Barrett who, fresh from her UK under-20 100m hurdles record the previous weekend, finished sixth in the sprint hurdles in Lille in 13.27 behind winner Pamela Dutkiewicz (pictured), who clocked a swift 12.75 as she consolidated Germany’s lead at the top of the competition.

In the men’s sprint hurdles, Orlando Ortega of Spain won with 13.21 with David Omoregie of GB a solid third in 13.36.

One of several athletes making their senior GB debut, Marc Scott also took the opportunity to shine as he finished strongly for a fine runner-up spot behind Jakub Holusa of the Czech Republic. The Briton, who recently won the NCAA 10,000m title, ran a 7:58.52 PB behind Holusa’s 7:57.60.

With the event taking place in France, the home crowd had plenty to cheer when Mahiedine Mekhissi-Benabbad won the 3000m steeplechase in style on home soil with 8:26.72 as Britain’s Rob Mullett ran strongly in fourth. “I got off to a good start and I managed to control all the attacks,” said Mekhissi-Benabbad. “Even as a favourite it is not easy to win.”

Renaud Lavillenie did not disappoint in the pole vault either in front of his home crowd. The world record-holder waited to come into to the competition at a higher height and eventually won comfortably with 5.80m as Britain’s Luke Cutts was eighth with 5.30m.

“Sometimes there were strong gusts of wind but I am happy to have managed to adapt,” said Lavillenie. “The most important is the points for the victory.”

The usually reliable Onuora did not look like her usual self as she laboured on the anchor leg. But there was worse to come in the men’s 4x400m as Rabah Yousif, Jarryd Dunn and Cameron Chalmers put Britain into contention only to see Sam Miller – who had run the 200m earlier and who was a late replacement for Delano Williams – struggle on the final leg.

It was a costly final result for Britain when it came to the overall standings but if the goal was to gain experience then they will leave Lille with plenty.

» See the June 29 issue of AW for full coverage