Games record from Kathryn Mitchell on the Gold Coast 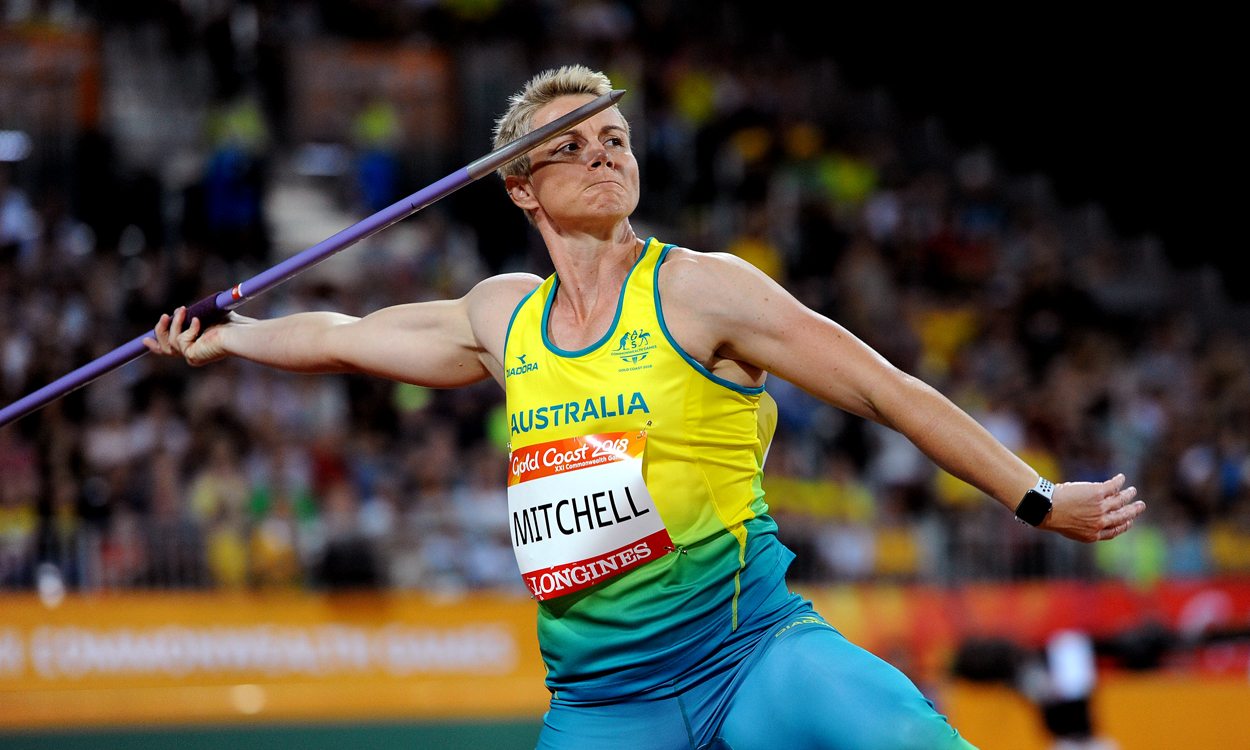 Not only did Kathryn Mitchell succeed fellow Australian Kim Mickle as Commonwealth javelin champion, but the 35-year-old beat her Games record by three metres with 68.92m.

Mitchell placed sixth, fifth and fourth in her three previous Games, but sealed victory on the Gold Coast with a mighty first round effort which also beat her own Australian record of 68.57m, which was set last month.

Behind, Kelsey-Lee Roberts ensured a host nation one-two with her final round throw of 63.89m, while Sunette Viljoen, the 2006 and 2010 champion from South Africa, took bronze with 62.08m.

While Mitchell was never going to be caught, the women’s 3000m steeplechase was a different story. With a lap to go, Celliphine Chespol looked a sure-fire winner but Aisha Praught-Leer of Jamaica had not given up chasing about eight metres behind the runaway Kenyan.

By the time the runners reached the water jump on the final bend, Praught-Leer had almost caught the Kenyan. The 28-year-old then breezed past Chespol with 80 metres to go to win by 1.61 seconds in 9:21.00.

Kenya took another minor medal with 2014 champion Purity Kirui winning bronze, but there were shades of the 2017 World Championships final where Americans Emma Coburn and Courtney Frerichs swept past Kenya’s Hyvin Jepkemoi in similar style.

The winner on the Gold Coast even has American links as she was born in Illinois, lives in the United States and is married to US miler Will Leer.

“I knew the Commonwealth Games was what I wanted and I worked towards it every day,” she said. “I just put in the work every day and believe that I can race anyone.”

Close behind the medallists, Rosie Clarke of England finished a fine fourth in 9:36.29 and said: “I thoroughly enjoyed that. Me and my coach decided just whatever happens just go for it, don’t leave anything out there.”

She added: “I definitely did that. I thought I was going to be able to cling on and then I could feel my legs going just before the bell so she got away from me. It was the reigning Commonwealth champion; Aisha, who has come on leaps and bounds; and then Chespol, who is an incredible athlete, so I really can’t complain.”

Only 16, Isis Holt of Australia is one of the rising stars of the para-athletics scene and she blasted to an emphatic victory in the T35 100m in 13.58 as Maria Lyle of Scotland took silver in 15.14.

“It’s an amazing feeling,” said Holt, who delighted her home fans with the win. “A PB would have been incredible but you can’t have everything. It’s great we have an integrated team with able-bodied and para-athletes.”

Lyle said: “I’m pleased with a medal but a bit disappointed with my run as my training has been going better than that. Now I’d like to defend my European title later this year.”

Amantle Montsho, meanwhile, took the women’s 400m in 50.15. The Botswanan is a controversial winner, though, as she took gold in Delhi 2010 but then tested positive for methylhexanamine at the 2014 Games in Glasgow and was handed a two-year ban.

The women’s 200m is arguably the highest-quality event of the Games and the semi-finals saw all the big names progress.

Shericka Jackson of Jamaica and Dina Asher-Smith of England cruised through the first semi in 22.28 and 22.44 before Olympic champions Shaunae Miller-Uibo of Bahamas and Elaine Thompson of Jamaica ran slightly slower to finish one-two in their semi ahead of England’s Bianca Williams. In the third semi, Crystal Emmanuel of Canada won in 22.87.

Speaking later, Proctor explained how she felt like herself again. “I’m just happy to be healthy and back competing well,” she added.