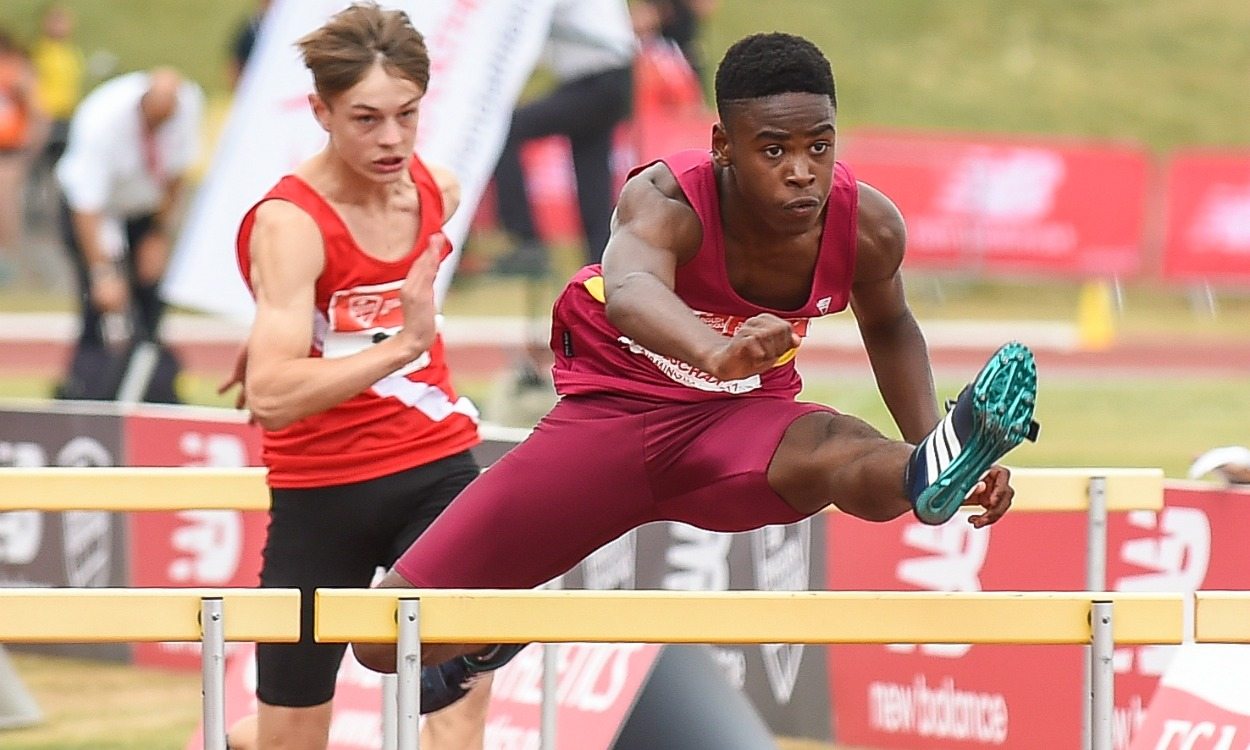 Brilliant weather and cut-throat competition between the leading 2000 young athletes in the country led to more championship records being smashed on the second day of the 87th English Schools Track and Field Championships in Birmingham.

In the junior boys’ 80m hurdles, Joseph Harding (pictured above) not only broke the championship record but broke a UK under-15 mark that had stood for a quarter of a century with 10.50.

With a flawless exhibition of hurdling, the Essex youngster glided over the barriers as he beat his rivals by almost three-quarters of a second. In great conditions, he was aided by a tailwind of 0.7m/sec and broke a national age record of 10.71 which had been held by Matthew Clements since 1992.

“I ran 10.80 at the Essex Schools into a headwind earlier this season, so I thought I had the ability to run faster,” said Harding. “I’ve been training for hurdles for about two years and used to do gymnastics before that.”

Harding is coached in the hurdles by former World Championships medallist and Commonwealth champion Tony Jarrett. But the youngster is also a talented long jumper and came fifth in that event at the 2016 English Schools.

“I enjoyed the race and it felt smooth although I didn’t see the time at the end so didn’t know it was a record straight away,” he added.

Khahisa Mhlanga (pictured below, No.27) was the star of the middle-distance events as she blasted to senior girls’ 800m victory in 2:04.40. The Essex athlete built an early lead after a first lap of 62 seconds and held her form to break Dani Barnes’ championship best of 2:05.18.

Now, she heads to the European Under-20 Championships in Italy on July 20-23 and said: “I’m looking forward to enjoying it and seeing what I can do there. The race today was hard but I enjoyed it. I was being chased throughout, which made me run faster.” 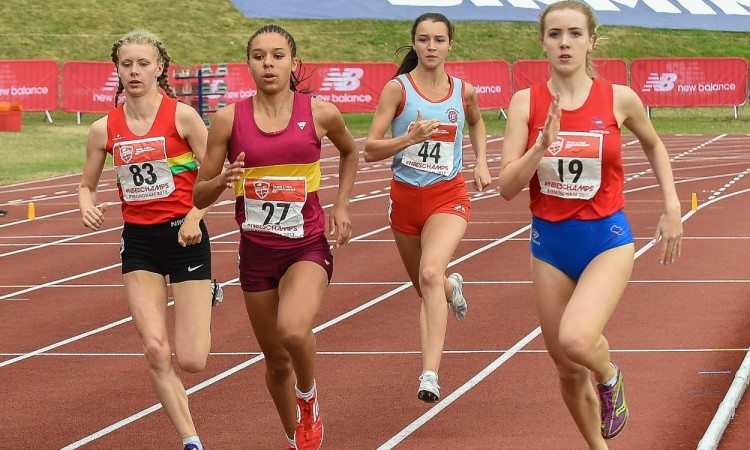 In the field, Jake Norris was in scintillating form in the hammer as the Berkshire athlete threw 76.84m to win by more than 10 metres as he broke Taylor Campbell’s championship best of 74.42m.

“That was good preparation for the European Juniors in a couple of weeks’ time,” he said. “I felt a bit rough when I woke up,” he added, when asked about the early competition time of 10am in his event, “but when the sun came out I began to feel better.”

One of the toughest championship records in the book – Geoff Parsons’ senior boys’ high jump record from 1983 – was also under attack but Tom Gale of Wiltshire had to be content with a 2.22m victory. He had three attempts at Parsons’ mark but fell just short of taking it down.

“There was a bit of a dead atmosphere at the British Champs last week,” said Gale, “but here I really enjoyed it – the atmosphere was incredible, the crowd were really responsive and great fun. It helped me jump an equal PB and it was a great way to end my English Schools journey.”

Parsons’ record is so tough, in 1992 it withstood a challenge from Brendan Reilly after the five-time English Schools champion was flown up to the championships in Hull in a helicopter laid on by a sponsor after he’d competed in London the previous evening in an international meeting.

Now 44 years old, Reilly was one of the guests of the 2017 championships and was presenting medals on Friday before another top high jumper, Robbie Grabarz, took over some of the duties on Saturday. 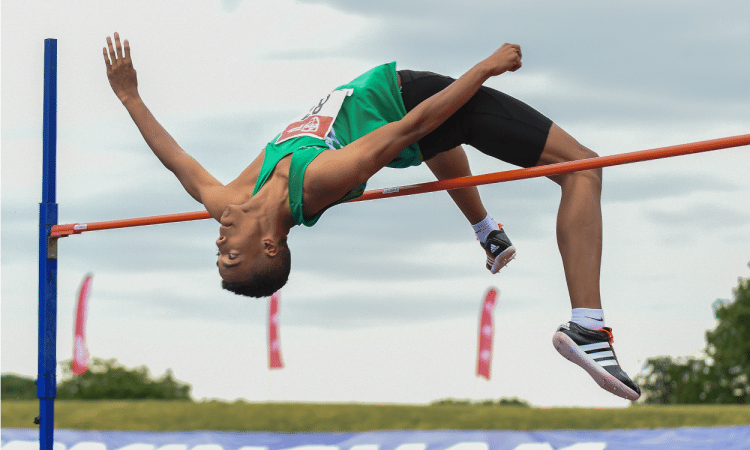 “I think I have the ability to jump 2.26m,” said Gale (pictured above) on the championship record, “but it didn’t happen here and the main thing for me is to have a long as I have a successful senior career.”

When it comes to achieving that, the spectating Grabarz, who won English Schools gold in 2005 and Olympic bronze seven years later, offered some great advice to the class of 2017, saying: “It’s important to put yourself in a position where you keep enjoying it. Athletics only gets harder so you want to be able to get up in the morning wanting to go to the track to train and to make progress.”

As the meeting drew to a close the record-breaking continued, though, in the senior girls’ pole vault. Toward the end of a gruelling, three-hour competition on Saturday afternoon, Molly Caudery emerged with a championship record of 4.20m after beating Jessica Swannack, who with 4.20m was also inside the old record of 3.85m.

It followed the pole vault records set by Sophie Ashurst and Frankie Johnson during the first day of the championships.

“I’m exhausted now, but very happy,” said Caudery, before climbing into a cramped mini-bus with her poles to begin the long drive back to her home in Cornwall.

» The July 13 issue of Athletics Weekly will have 12 pages of reports, photographs and results from Birmingham