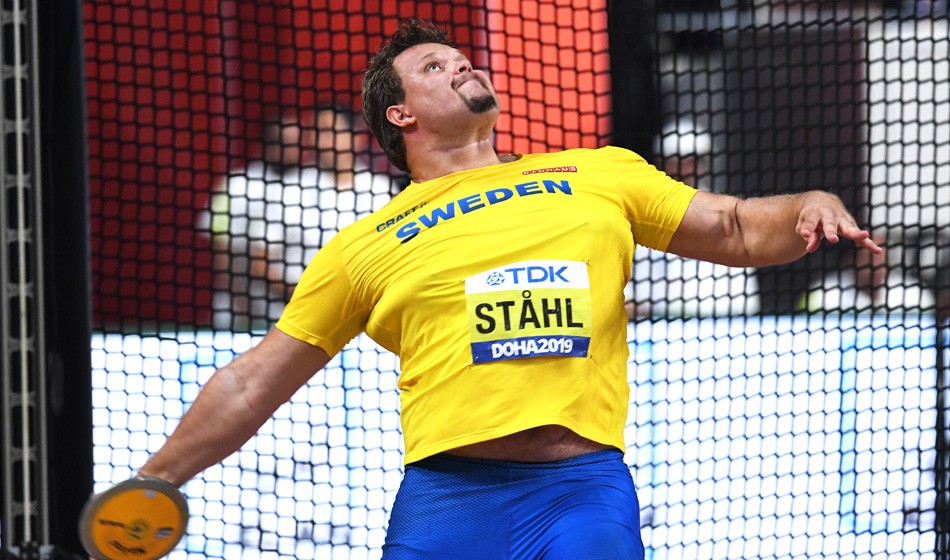 Daniel Stahl lost the world discus title in 2017 by just two centimetres to Andrius Gudzius then also finished runner-up to the Lithuanian at the European Championships last summer.

The Swede was not to be denied in Doha, however, as he dominated from start to finish to become his country’s first global gold medallist in the event. It was his third-round throw of 67.59m which made sure he would finish on top of the podium but he was the only competitor to clear the 67-metre mark on the night.

The 27-year-old, who went equal fourth on the world all-time list when threw 71.86m earlier this year, simply couldn’t contain himself after victory was confirmed, charging on to the infield in celebration.

As expected, Jamaican Fredrik Dacres got closest with a second-round 66.94m which won silver, his first senior global medal, while an historic bronze went to Lukas Weisshaidinger of Austria – he becomes his nation’s first ever male world medallist –thanks to his third-round 66.82m.

Gudzius, who has not been at his best this year, could only manage a second-round 61.55m before retiring after a third-round failure.

Victory was sweet for Stahl, who said: “This is historic for Sweden. I am really happy to win the first global gold for my country in the discus. I have been fighting for this for many years. I am speechless now.

“This year has been about hard work, improving my technique and travelling around the world and winning a lot of meets. I had two goals: to make it to the final and then win gold. I will now take two weeks off and continue the hard work. Tokyo is only 10 months away.”

Huihui leads the way in javelin

Liu Shiying of China was third overall, topping Group A with 63.48m, while Czech defending champion Barbora Spotakova qualified in third from Group B thanks to a throw of 62.15m.