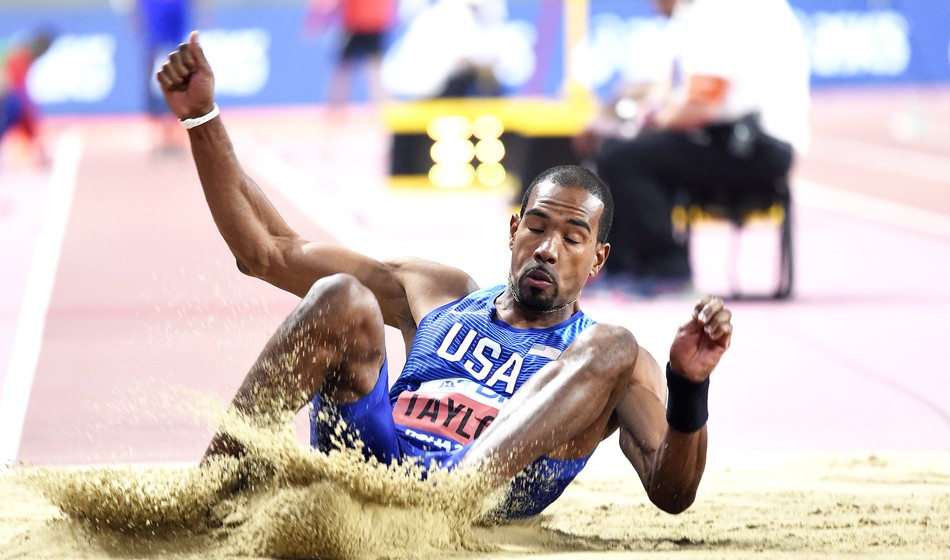 Amid fears of a Diamond League chop, American sends message to IAAF with quality performance at World Champs in Doha

Christian Taylor hopes his victory in a high-class triple jump contest in Doha will help save his event being cut out of Diamond League.

The 29-year-old won his fourth successive world title with a season’s best of 17.92m in an entertaining competition as fellow American Will Claye took silver with 17.74m and Hugues Fabrice Zango of Burkina Faso claimed bronze with an African record of 17.66m.

“It’s unfortunate that we’ve been having the discussion,” said Taylor on rumours the triple jump could be cut out of a slimmed down Diamond League programme. “The triple jump is at a phenomenal level right now.

“In the Paris Diamond League this year the energy was amazing. In the end I believe we belong here. There is a strong interest in the triple jump.”

The small number of spectators in the stadium certainly got behind the event. “The crowd was phenomenal,” said Taylor. “It was rocking. Hopefully this gets the IAAF attention and keeps us going.

“We’re familiar with Doha and knew the atmosphere would be perfect. The biggest concern was the climate but it was fine.”

Taylor started with two fouls as Claye took the lead with 17.61m in the first round. But Taylor then got into his stride with 17.42m, 17.86m and 17.92m in successive rounds to stamp his authority on the contest.

Claye improved to 17.72m in round two and 17.74m in both the fourth and fifth rounds but it wasn’t enough to overhaul his team-mate.

Zango, meanwhile, took bronze with his African record, just ahead of Pedro Pablo Pichardo – the Cuban-born athlete who now represents Portugal – who jumped a season’s best of 17.62m.

“I just needed to stay calm and collected and put big jumps out there,” said Taylor. “I’ve been chasing the world record – and chasing it too hard! I need to find the balance between trying hard and staying calm and Will (Claye) was helping me in the last round.”

Claye said: “The runway was really fast and I think that showed. It showed with Christian’s first two fouls and also the big jumps.

“When you make adjustments to that then you can jump far. I don’t know who was in the crowd but whoever it was making a lot of noise and we wanted to make a real show.”