Chris Thompson makes it two in a row in Glasgow 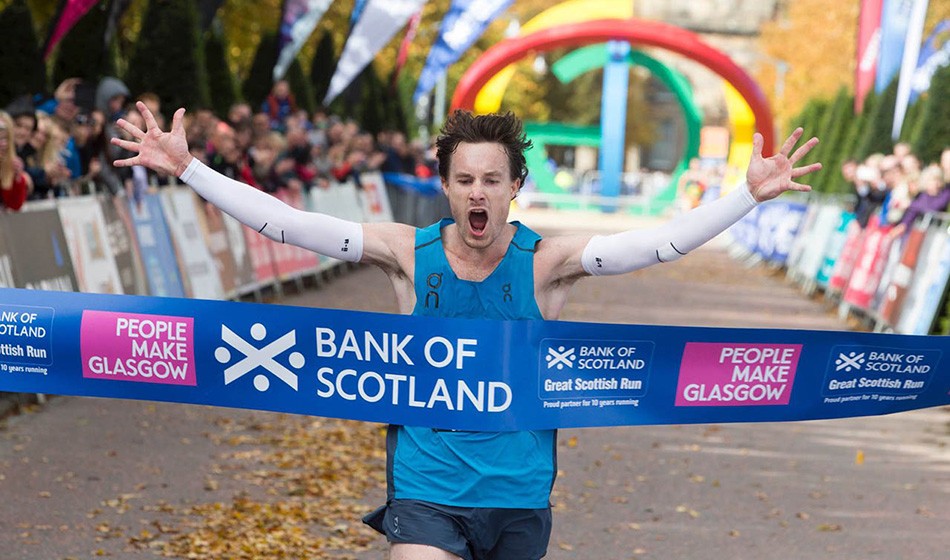 Chris Thompson was content with a job well done as he successfully defended his Bank of Scotland Great Scottish Run title in convincing style in Glasgow.

As with his victory 12 months ago, when he saw off Callum Hawkins and Tsegai Tewelde, the 37-year-old established a commanding lead in the opening half of the race which he would not relinquish.

His finishing time in somewhat drier – albeit considerably windier – conditions on this occasion was 62:07, coming home ahead of Pole Marcin Chabowski’s 62:24 and Luke Traynor (62:56).

It was the young Scot who had led the way just ahead of Thompson and Chabowski in the early stages but the more experienced athlete bided his time before moving to the head of affairs and began to really stretch his lead around the five-mile mark.

Thompson was not threatened at any point from there on in and his winning time is his third-best ever over the distance. He will now concentrate on making his final preparations for a tilt at the TCS New York City Marathon at the beginning of November.

“I knew the other guys wanted a race so to beat them convincingly tells me everything I need to know,” said Thompson, who had clocked 62:44 in winning last year. “It was harder than last year so, as a performance, I’m happy. It’s possibly my best half-marathon race, especially in those conditions. The good thing is I didn’t have to race to the line over the last three miles so that minimised the damage.”

He added: “I tend to race my opponents these days. Luke really wanted to keep pushing… that was the race. The Polish guy kept going and it was only 5k out that I knew I had him. I was very impressed with him.”

Traynor, who will look to defend his title at the Manchester half-marathon before targeting the cross country season, won the Scottish half-marathon title with his third-place finish.

“I’m proud of how I ran but I don’t have that endurance yet to hold that pace,” he said. “It was super-windy and it was a grind and Chris has been up at altitude so I couldn’t keep up with him. But I feel I’m in the process of taking that next step. I’m ready to hit a big half-marathon. He was ready here and I wasn’t.

“This summer I had unfinished business on the track but I had maybe too long a break afterwards. But there is a world cross country championships next year and so I want to be in peak shape in February, not now.” 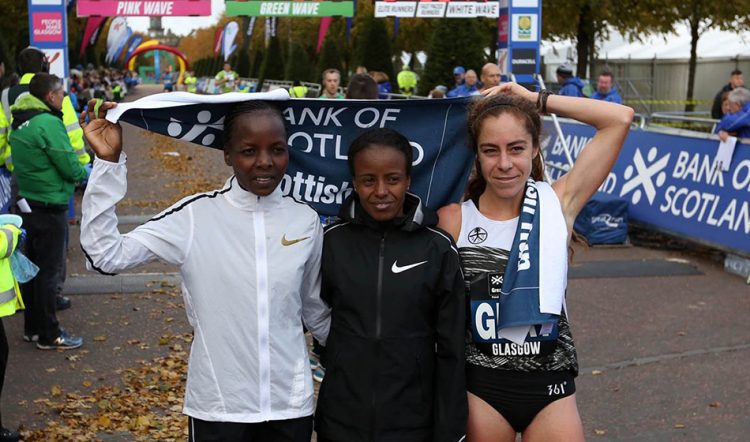 The women’s race was won in even more convincing fashion by Ethiopia’s Mare Dibaba, another athlete looking to peak for a big autumn marathon.

The 2015 world marathon champion, who did not finish at the Dubai marathon and came seventh in London earlier this year, has Frankfurt in her sights and looked in imperious form in Glasgow. She broke the tape in 69:15, almost a minute ahead of reigning world marathon champion Rose Chelimo (70:07). American Alia Gray was third in 73:32.

“Since I haven’t raced for a long time (she was seventh in London and DNF in Dubai earlier this year), I am very happy to come first in this race,” said Dibaba, who had made the early running alongside Chelimo before pulling away and spending much of the race accompanied by Para marathon World Cup gold medallist Derek Rae.

In the 10km contests, Adam Craig of Edinburgh AC took first place in a time of 29:43 ahead of Metro Aberdeen athlete Cameron Strachan (31:20) and Shettleston Harriers’ Daniel Bradford (31:22).

Gemma Steel warmed up for the forthcoming Commonwealth Half-Marathon Championships with a victory in 34:00 ahead of fellow British international Mhairi Maclennan (34:12) and Kilbarchan’s Elspeth Curran (35:11).

The wheelchair athletes had got the day’s events underway and it was Patrick Monahan who led the field home, the Irish Paralympian clocking 24:31 to won comfortably from Sam Kolek (27:58) and Kyle Brotherton (28:07).

Home favourite and double Para world champion Sammi Kinghorn was the only female athlete in the field and crossed the line in 30:36.

» See the October 4 edition of AW magazine for full coverage