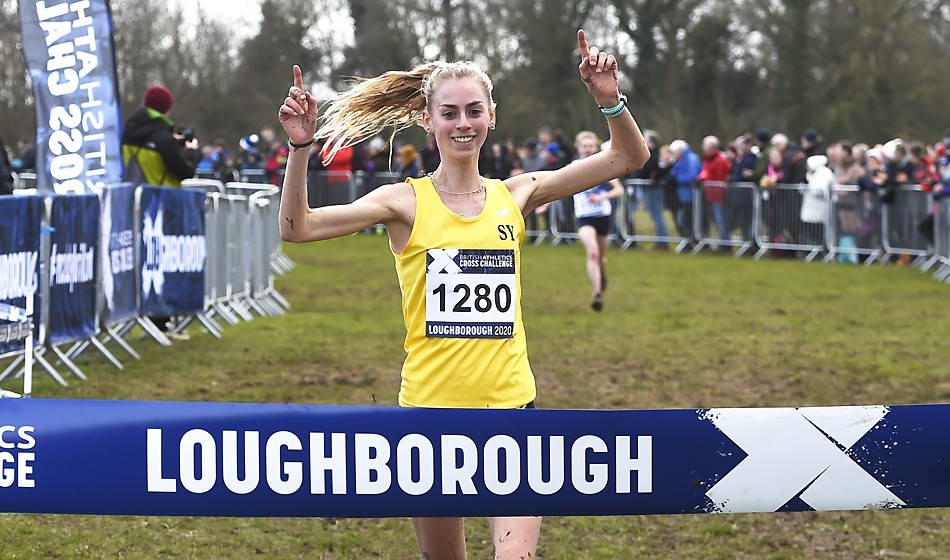 Charlotte Dannatt was supposed to race in the World Universities Cross Country Championships in Morocco this weekend but after it was called off due to the coronavirus outbreak she made a late decision to run the Inter-Counties instead at Prestwold Hall near Loughborough. It proved a good move, too, as she won an unexpected gold in the senior women’s race ahead of Jess Gibbon and Phillipa Williams.

Racing on a grey but dry day in the East Midlands on a course that was drier than expected but with plenty of sections of sticky mud to test the stamina, Dannatt (pictured above) took the Inter-Counties title although the overall Cross Challenge series victory went to fifth-placed Kate Avery.

“I don’t win many things so I don’t even know how to break the tape or anything like that,” said a delighted Dannatt.

“I was disappointed to miss the World Universities event as it would have been a GB vest,” she added. “I just missed the European Champs team before Christmas, so I’ve been trying to prove to people that I’m good enough to earn a GB vest.”

A final year biomedical sciences student at Oxford University, Dannatt has her work cut out with assignments and upcoming exams. But the Surrey runner was keen to make her mark on Saturday at Prestwold Hall, although she did not expect to win. “I thought if I had a stellar run I might make the podium,” she said.

Inter-Counties winner Charlotte Dannatt tells @Jason_AW she only ran at Prestwold Hall after the World Universities XC Champs in Morocco was cancelled due to coronavirus. pic.twitter.com/iz7CxCnqde

Dannatt almost didn’t make the start either after getting lost on what turned out to be a 10km shake-out run on the morning of the race on the outskirts of Loughborough. It resulted in her having to rush her breakfast although didn’t seem to affect her in the race as she won by six seconds from South of England champion Gibbon.

Mahamed Mahamed also impressed as he struck gold for Hampshire in the senior men’s race and, in doing so, captured the overall Cross Challenge series prize for the third time on the trot. The 22-year-old shared the lead with Adam Hickey, the defending champion, for the first half of the race before pulling clear during the final lap to win by 15 seconds.

Runner-up Hickey was clear for silver as Tom Evans, who specialises in ultra-distance races, took his first podium place in this event. Welsh champion James Hunt was fourth and English champion Calum Johnson fifth as he led North East Counties to a team victory over Yorkshire.

Mahamed, whose younger brother Zak was 18th, will now turn his attentions to the track season, whereas Hickey is due to run the Virgin Money London Marathon if it takes place due to coronavirus fears.

Megan Keith was one of the most emphatic winners of the day as the Scotland North athlete took the under-20 women’s title by more than half a minute from Imogen Wood of Cornwall.

For under-20 men’s winner Matt Stonier it was the Kent athlete’s first big British or national title as he drove away in the cloying mud from rivals Josh Cowperthwaite and Henry McLuckie.

Zoe Gilbody won the under-13 girls’ race minus her right shoe. The Shropshire runner’s spike was sucked off in the mud halfway through her race but she somehow built up a 26-second winning margin over Shakira King and Maisey Bellwood.

Zoe Gilbody tells @Jason_AW about winning Inter-Counties U13 gold minus a shoe. pic.twitter.com/5Xssq1GTGQ

Kiya Dee made no such mistake in the under-15 girls race as the Gloucestershire athlete won by 10 seconds and was wincing in mild pain after the race due to her spikes being too tight.

Dee’s Gloucestershire team-mate Henry Sheffield also took gold as he won the under-13 boys’ race and, like many young athletes at Prestwold Hall, they are likely to race again next Saturday at the New Balance English Schools Cross Country Championships in Liverpool.