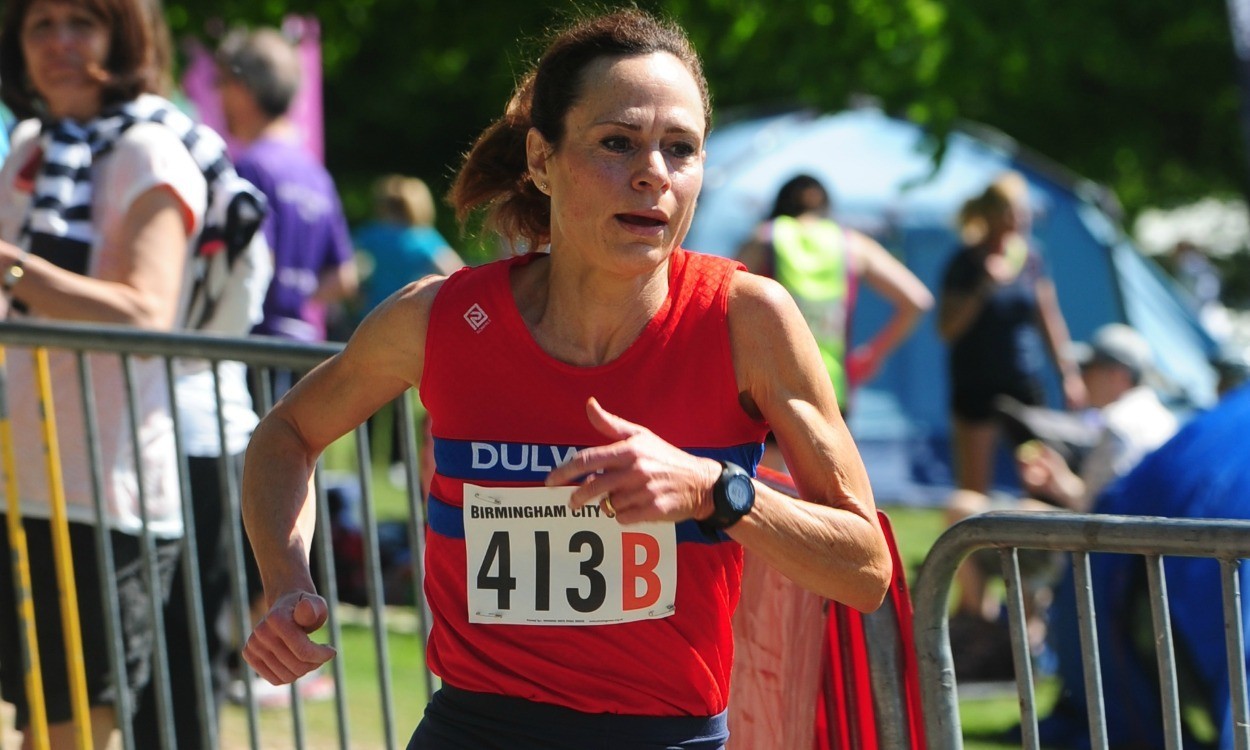 GB veterans win 18 golds on day three of the European Masters Champs in Italy, including eight at 1500m

Britain dominated the 1500m races at Eraclea and Jesolo and enjoyed plenty of success elsewhere in hurdles and the field and now stand just a single gold behind Germany in the medals table.

In one of the most successful days in the history of British masters athletics, the team won 18 gold medals, with Zoe Doyle starting the ball rolling for the 1500m runners.

The W40 world indoor champion was not at full fitness after having only been in training for five weeks after injury but she had sufficient speed on the last lap to win in 4:49.09 from Spain’s Raquel Hernandez (4:50.00).

Elms (pictured above) made her move only 500m out and though well within her comfort zone, she won by 12 seconds in 5:03.71 from Spain’s Esther Pedrosa Carrete, who had followed her home in Poland in the 1500m, 3000m and cross-country.

Christine Anthony gained a second UK medal in 5:23.01 as she won a sprint for third.

Elms’ Dulwich club mate Ros Tabor won the third British women’s gold at the W70 event. New to the age group, she followed multiple past champion Ingerlise Villum’s fast start before kicking away down the back straight to win in 6:14.29 from the Dane’s 6:17.33.

While the women competed at a quiet Eraclea venue, the men participated at the same time in a fantastic atmosphere at the main track in Jesolo and it brought out the best of British 1500m running as just as in Torun, the UK took the most golds in traditionally their best event of the championships.

Paul Fletcher, who was third in Torun indoors, had his biggest win to date in an exciting M60 finish which had the top six finish within less than three seconds. He won in 4:43.31 just ahead of Italy’s Aldredo Bonetti (4:43.62).

Guy Bracken won in Torun and in Malaga and he kept his gold run going with a clear win in the M55 race in 4:23.04 three seconds up on France’s Xavier Lefay.

Mark Symes was chasing the same triple as Bracken and he too was less successful though not as convincingly.

Not at full fitness after coming back from injury, he ran a sensible race and though ahead in the last 200m, holding something back in the straight to win in 4:18.51 as Estonia’s Magnus Kirt caught Spanish-based Dave Cowlishaw on the line. The Brit was third in 4:19.45.

A Brit-free M45 followed but the golds returned in the next race – the M40s. Matt Barnes looked strong and in control on the last lap but Francesco Nadalutti sprinted past on the final bend but in the last 30 metres he tied up and Barnes kicked past to win in 4:12.95 from the Italian’s 4:13.66.

In an exciting finish Matt Barnes wins Britain’s seventh 1500m gold of the day with a win in M40 race in 4:12.95 to catch Francesco Nadalutti pic.twitter.com/C7yfdRTVVs

Other British medals were won by Lucy Elliott, who bravely tried to front run the W50 event but had to settle for third in 5:00.69 as multiple world champion Eva Trost of Germany kicked to victory in 4:54.63.

The W60 300m hurdles world record-holder Jane Horder won her event by over two seconds in 52.44.

There was further gold for W55 Julie Rogers who was equally dominant with a 51.55 victory over Norway’s Heidi Barth (54.74m)

Lisa Thomas, who is the British W50 steeplechase record-holder, showed good speed with a 50.51 silver medal behind Italy’s Maria Moroni (47.42).

Peter Benedickter was just a few metres from winning the M50 race but had to settle for third in 60.68 as France’s Antoine Abatucci took gold in 60.30.

The field was not quite as productive as the track but there were still some exceptional performances with golds for Evaun Williams, Andrea Jenkins, Jane Willoughby and Anthony Treacher.

Williams won her second gold of the championships as she took W80 hammer gold with a 36.88m throw as all her four valid throws were well over seven metres superior to her competitors.

Jenkins won the W40 weight event. Narrowly behind after round one, a 13.62m second throw ensured a clear gold and she also had two more throws well in excess of the opposition.

Willoughby was a clear winner of the W55 triple jump with a British record 10.45m as Melanie Garland finished third with 9.48m.

Treacher won the M80 triple jump title thanks to a first round 7.54m.

John Watts gained a M80 silver in the weight with a final round 15.46m which fell just short of Austrian Walter Krifka’s 15.68m.

Lucy Marshall gained her second medal with a silver in the W35 weight with 17.76m to lead at halfway but she was overhauled by Portugal’s Vania Sofia Sousa Silva’s 18.62m.

Adam Young won a M50 high jump silver as he achieved a final clearance at 1.79m but his main rival Ugis Lasmanis, who did likewise then went over 1.82m at his first attempt.