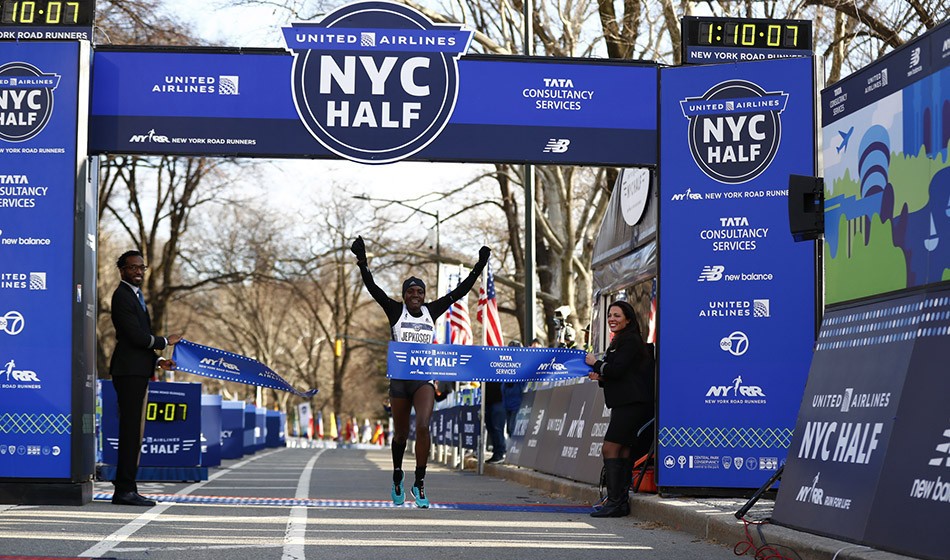 Belay Tilahun and Joyciline Jepkosgei took victory at the NYC Half on Sunday in contrasting races.

Ethiopian runner Tilahun surged past long-time leader, Daniel Mesfun of Eritrea, in the closing stages to win the men’s race in 62:10, while Jepkosgei of Kenya proved a more emphatic winner of the women’s race as she clocked 70:07.

Jepkosgei holds the world record for the distance but the New York City course is not known for its fast nature, but she won by a minute from fellow Kenyan Mary Ngugi as the 2018 winner, Ethiopia’s Buze Diriba, was a close third.

Paul Chelimo was the top American in the men’s race in 62:18 in third and Emma Bates the leading US female with 71:13 in fourth as Boston Marathon champion Des Linden ran 71:22 in fifth.

In Europe there were wins in the EDP Lisbon Half Marathon for Vivian Cheruiyot of Kenya in a course record of 66:34 in the women’s race and Mosinet Geremew of Ethiopia in 59:37 for the men’s title as five men broke the one-hour barrier.

Kate Reed, who ran in the Beijing Olympics just over a decade ago, ran a PB to take the women’s victory in 72:44 from Rachel Felton (75:53).

Soooo thrilled to win the @bathhalf marathon this morning in a new pb of 72:44 was pretty windy out there but the crowds got me through it! So grateful to everyone who supported me on the course-was so nice having family and friends cheering me on. Big thank you to my great physio and friend @clairerwheller for putting me up overnight & getting me to the start line and shout out to all the crew @running_bath for kitting me out with shoes for the past few years and also @reviveactive for supplying me with fantastic supplements. Special thanks to Alan Storey -not a bad result coaching both the 1st male ( @thommo26.2 ) and 1st female. I’m off home for a hot bath and a @guinness to celebrate my win and also #stpatricksday 🍀🍺

At the Sage Reading Half Marathon on Sunday, Scott Overall came out top in 63:50. The London Olympian is preparing for the Boston Marathon and, like Bath winners Thompson and Reed, is coached by Alan Storey.

“We had a good field out there this year, so it was a tactical event for me,” said Overall. “The support out in the town was fantastic, as always, and it pushed me through to a strong finish.

“I wanted to cross the line sub-64 minutes and I got it! All great race preparation for Boston just round the corner.”

Steph Twell was the leading woman in Reading with 71:37, just a week after her runner-up finish at The Vitality Big Half in London where she ran 71:33. Her AFD club-mate Louise Small was second in Reading in a PB of 72:46.

In Fleet, the Asics-sponsored half-marathon was won by James Bellward of the Royal Air Force in a PB of 67:34 and Hart Road Runners’ Lesley Locks in 78:29.

On Friday at the Bahrain Night Half Marathon, Abadi Hadis won the men’s race in 59:42 after leader Jemal Yimer stopped to celebrate 50m before the finish line.