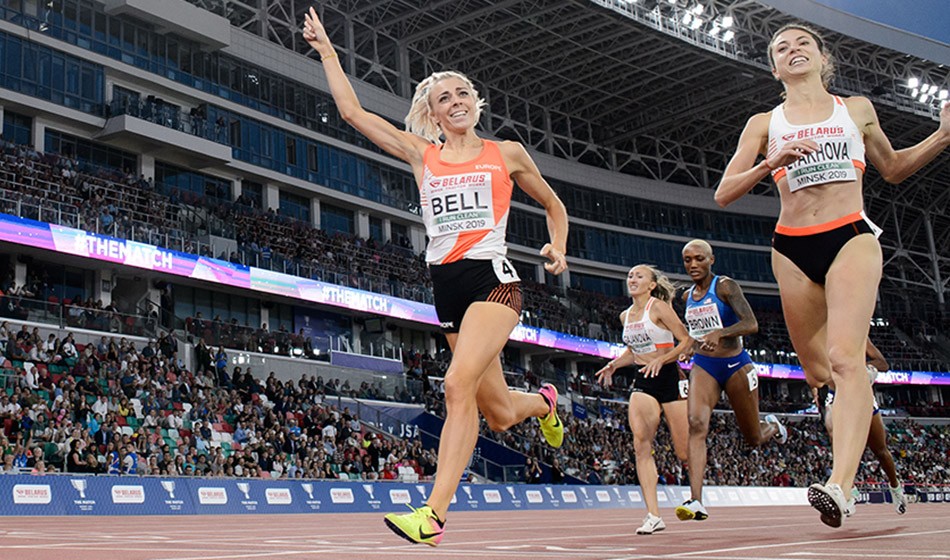 Alex Bell was among the winners as the British middle-distance runner took the 800m victory at The Match in Minsk to help give Europe a 331 to 304 lead over the United States at the end of the first day.

Bell (pictured) enjoyed the race of her life to clock 2:04.81 after out-lasting fellow European team-mate Olha Lyakhova in the final metres of an exciting race.

“I’m very happy to win this race,” said Bell. “It was kind of a technical race, I don’t race too much and this was a great opportunity to practice for the World Championships. My season has been very good, my results are rising.

“The atmosphere is really great, I’ve never experienced anything like that before. It’s nice to be a part of the team and feel the support.”

Bell was not the only British athlete to win, though. British sprinter Daryll Neita 11.29 (-0.8) finished first in the women’s 100m in one of the earliest events of the night as she finished one hundredth of a second ahead of America’s Dezerea Bryant with a strong finish.

“I’m running the 100m in Doha so I’m happy that went well,” said Neita. “This was a good stepping stone for that and it’s amazing to be here and represent Europe. I love wearing the orange for my continent.”

Europe is traditionally strong in field events and high jumper Maksim Nedasekau of Belarus produced the performance of the meeting so far with a world lead of 2.35m.

Another top performance came from Poland’s Pawel Fajdek as he won the hammer for Europe with 80.71m as Britain’s Nick Miller was third with a fine 77.89m as his strong late-season form continues.

The pole vault was also a high standard with Anzhelika Sidorova clearing 4.85m to win from Katerina Stefanidi’s 4.70m.

Two days after competing in the Great North CityGames over 150m in North East England, Allyson Felix continued her comeback by placing runner-up to fellow American Wadeline Jonathas in the 400m – the duo clocking 51.01 and 51.36 as Jodie Williams of Britain was fourth in 51.83.

Elise Cranny of the US took the women’s 3000m in 9:00.69 as Eilish McColgan was close behind in third place for Europe.

One of the most exciting events of the first day saw Jake Wightman edged into second by Josh Thompson of the US in the men’s 1500m in 3:38.89. Wightman made a strong burst on the last lap and held a good lead into the home straight but Thompson ran him down as Ben Blankenship, Charlie Da’Vall Grice and Kevin Lopez followed in third to fifth.

The Match continues on Tuesday in Minsk with the final day of competition.