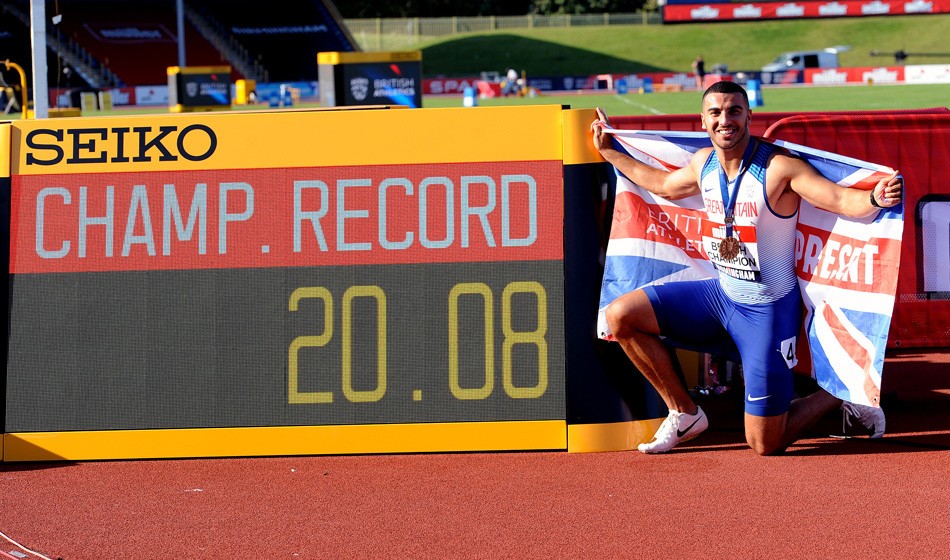 Sprinter runs 20.08 at British Championships in Birmingham on a day that also sees big shocks in the men’s middle-distance races

Written off by some as a ‘mere’ relay runner, Adam Gemili carved his name into the history books at the Müller British Championships on Sunday by winning the men’s 200m in a championship record of 20.08.

The 25-year-old will now head to the IAAF World Championships next month as a medal contender. When he last won the British title, in 2016, he went on to place a close fourth in the Olympic final in Rio, so he is hoping to improve on that in Doha in a few weeks’ time.

Seven days after pushing former world champion Yohan Blake to the wire over 100m at the Birmingham Diamond League event in the same arena – and 24 hours after winning 100m silver – Gemili beat Zharnel Hughes (20.25) and Miguel Francis (20.34) to the national title over half a lap.

Nethaneel Mitchell-Blake, who held the championship record previously with 20.18 from 2017, clocked 20.39 in fourth. Impressively, Gemili ran the new CBP into a -1.9m/sec headwind as well.

In the final track race of the last major meeting before the Alexander Stadium is demolished and re-built ahead of the 2022 Commonwealth Games, Gemili’s run was also a stadium record and a spectacular send-off for the spectators who came to watch the meeting under sun-drenched skies and in temperatures of around 30C.

“I know what I can do and if I’m fit and healthy I can push the world’s best and I know I can do that,” said Gemili, who has struggled for the last couple of seasons with hamstring problems.

Last winter he was put on Lottery funding for the sprint relay – and not as an individual runner. “To be labelled a relay runner is never nice, especially in an individual sport like track and field,” he added.

Coming into the championships Jamie Webb and Charlie Da’Vall Grice led the UK rankings this season for 800m and 1500m respectively, but the form book was turned on its head as Spencer Thomas and Neil Gourley showed their speed and tactical acumen to take gold medals.

Thomas (pictured below) punched his fist through the line as he crossed the finish of the 800m but he was not sure if he had won the race. Runner-up Guy Learmonth was also uncertain, which was not surprising given that both men were given the same time of 1:46.79. The verdict however went to Thomas from Learmonth with Webb a close third in 1:46.84 as Elliot Giles came fourth and 2017 world fourth-placer Kyle Langford looking out of sorts in eighth. 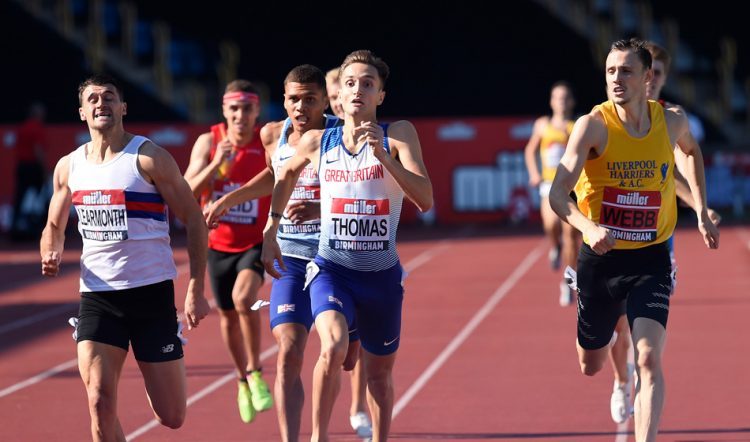 There was similar drama in the 1500m as Gourley found a gap on the inside lane in the home straight of a slow race to pass leader Josh Kerr to win in 3:48.36. The field dawdled through 800m in 2:14 but the race sprang to life on the last lap, with Gourley powering through to win as Kerr was second and Jake Wightman third – completing a Scottish one-two-three for the third consecutive year – with Grice fourth.

The 400m was more straightforward as Matt Hudson-Smith, returning from injury, clocked a world qualifier of 45.15 to win by more than half a second on his home track.

.@mattonthefloor talks about his race to win the #MullerBritishChamps 400m, securing his world championships spot, and what he has been through in 2019. pic.twitter.com/p6ohGJ1dWB

Dai Greene turned back the clock in the 400m hurdles as the 2011 world champion blasted through the early part of the race and led into the home straight. But with everyone tying up in the closing metres the 33-year-old was passed by Jacob Paul, who clocked 49.57 to win by one tenth of a second from Greene with Chris McAlister third in a close race.

In the 3000m steeplechase Zak Seddon enjoyed a runaway win. The Bracknell athlete ran an 8:21.28 PB in Rome earlier this summer and here in Birmingham on Sunday he sealed selection with 8:36.30 to take the British title in the heatwave temperatures.

In addition to the heat a swirling wind affected a few events over the weekend and the men’s sprint hurdlers faced a headwind of -2.5m/sec as David King pipped Cameron Fillery – both men given the same time of 13.78.

The heat did not bother Callum Wilkinson as he scorched to a UK record in the men’s 5000m race walk. Held in the heat of the midday sun, the 22-year-old clocked 18:41.23 to beat Tom Bosworth’s outdoor national best by two seconds although Bosworth has clocked 18:28.70 indoors.

Callum Wilkinson talks to AW about his UK record-breaking 5000m race walk of 18:41.23 at the #MullerBritishChamps pic.twitter.com/Vl958fvDFH

Wilkinson, a former world junior 10km race walks champion, now heads to Doha to compete in the 20km event in the knowledge his basic speed is better than ever.

» News from the men’s field events on Sunday here and women’s competition here. For full coverage see the August 29 issue of AW magazine