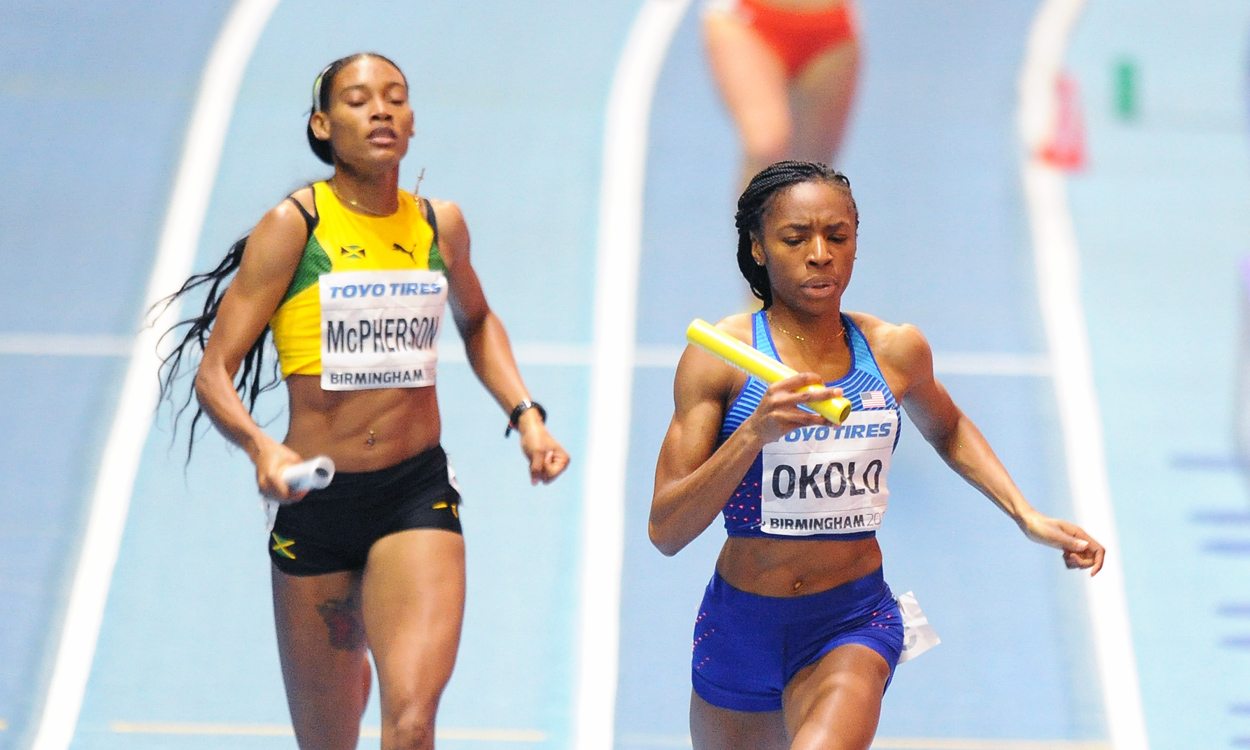 Just behind Okolo, Commonwealth 400m champion Stephenie Ann McPherson initially looked to have anchored Jamaica to silver but the team was later disqualified due to a baton exchange rule violation.

Poland had placed third in a national indoor record of 3:26.09 and so secured the silver, but there was a bit of hokey cokey when it came to the bronze.

The Great Britain and Northern Ireland team of Meghan Beesley, Hannah Williams, Amy Allcock and Zoey Clark had run well with 3:29.38 to cross the line in fourth and were disappointed to have just missed out on a medal. Elation followed, however, as they were promoted to the podium following Jamaica’s disqualification, but the rollercoaster of emotions continued as the GB team was also later listed as ‘DQ’ for obstruction. 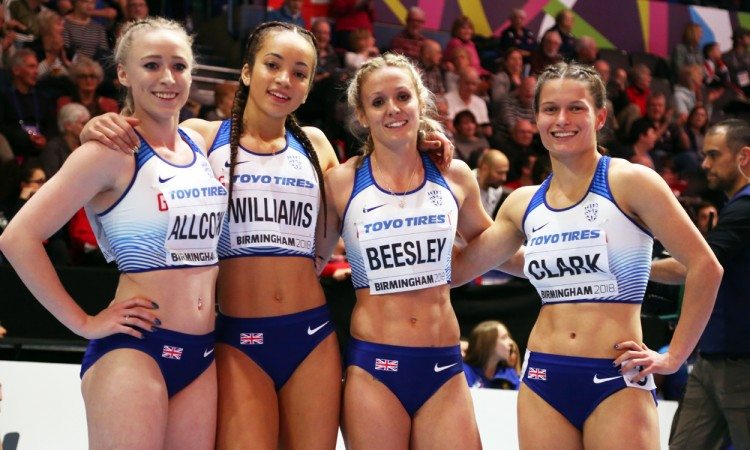 As a result, the originally fifth-placed Ukraine team was briefly boosted to bronze, but then an appeal by the British team against the disqualification was successful and the result reinstated.

“It’s been quite emotional!” said Allcock, who ran the third leg. “It’s been a long few hours, we were overwhelmed with everything. One minute we were fourth then we were in bronze, then we were disqualified – we generally didn’t know what was going on!”

Clark, who anchored the team and had finished sixth in the 400m final the evening before, said: “We’re still processing what’s happened and a bit in shock. There was lots of mixed emotions going on – disappointed, happy, disappointed – but we’re all thrilled to come away with bronze.

“It’s one the fastest times that a GB team has ever run indoors so for such a young team, we did amazing.”

The quartet had been missing GB relay mainstay Eilidh Doyle, a five-time global relay medallist, due to “a bit of a calf strain” sustained in her bronze medal-winning 400m run.

On her absence, her fellow Scot Clark added: “Eilidh is such a staple in the relay, we missed her a lot. But she was there in the warm-up and she was giving us support and advice all the way through so she’s still part of the team, even though she didn’t run in the final today.”

Okolo and Wimbley had beaten Doyle to claim 400m gold and silver the day before and ran respective splits on the third and anchor legs of 51.29 and 50.18. The 2016 world indoor 400m bronze medallist Hayes had opened with 51.51 before passing the baton to hurdler Moline who clocked 50.87 for the second leg.

“Great competition is always going to make you run faster and that’s what we did today,” said Moline.

Wimbley added: “We all have great chemistry. The goal was to come here and represent USA as best as we can. We have a strong history in the 4x400m.”