Clowes was an impressive winner of the men’s race, claiming his seventh victory of 2019 in Wales’ second city.

His victory came ahead of over 6000 runners at Wales’ largest summertime road race.

The Cardiff man stopped the clock on 65:49, just over a minute shy of his 64:44 course record from last year but still nearly a minute clear of repeat runner-up Josh Griffiths of Swansea Harriers with 66:37.

The pair had shared the lead in the early stages with 10km passed in 30:40 but with Clowes making a decisive move soon after at the seven mile point.

He didn’t look back as the advantage grew in the final stages, scoring an impressive victory over 2017 British marathon champion Griffiths.

“It was a good race today,” said Clowes. “Me and Josh ran together in the early stages and it felt very easy early on.

“As soon as the turn came it got really tough at about seven miles because the wind was really strong.

“I wanted to push for a course record but it just wasn’t the day to be honest.” 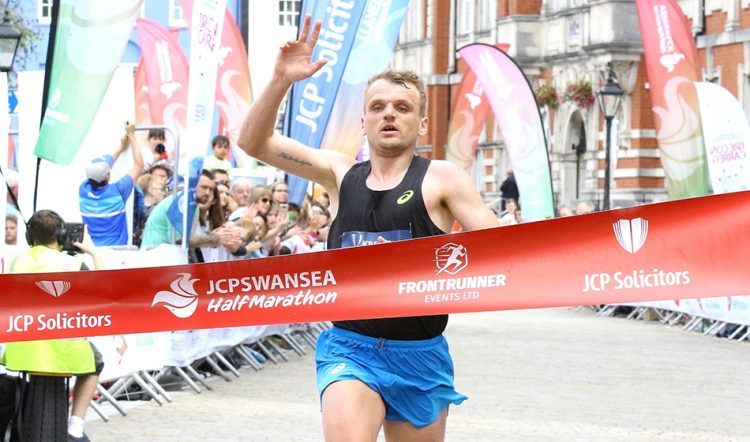 Commenting on forthcoming races, he added: “I’ve got Highgate in two weeks. I’m not really a track boy anymore but I’ll go there and try to run low 29 minutes.”

Since last year’s race Barlow has lowered her own best for the distance to an impressive 72:13 when finishing fifth at the 2018 Commonwealth Half Marathon Championships and as a member of the bronze medal-winning team, running for England.

Charlotte Taylor-Green of Bristol & West AC was the next fastest athlete on paper and lived up to her billing as a podium favourite by finishing second in 66:58. Naomi Mitchell of Reading AC was next home in third.

“I’m pleased to take the win,” said Barlow. “I’m disappointed with my time but seeing how everybody else faired with it, it was quite a tough race, quite a tough day in the office.

“I’ve got some shorter races coming up with my club Thames Valley Harriers so that will be the aim for the summer, to get some speed into my legs.”

Richie Powell stormed to his title defence in the wheelchair race with 65:03.

The Ebbw Vale based athlete who competes for DSW Sport Wales was pleased with his performance despite the wind, following a break from the sport with pneumonia.