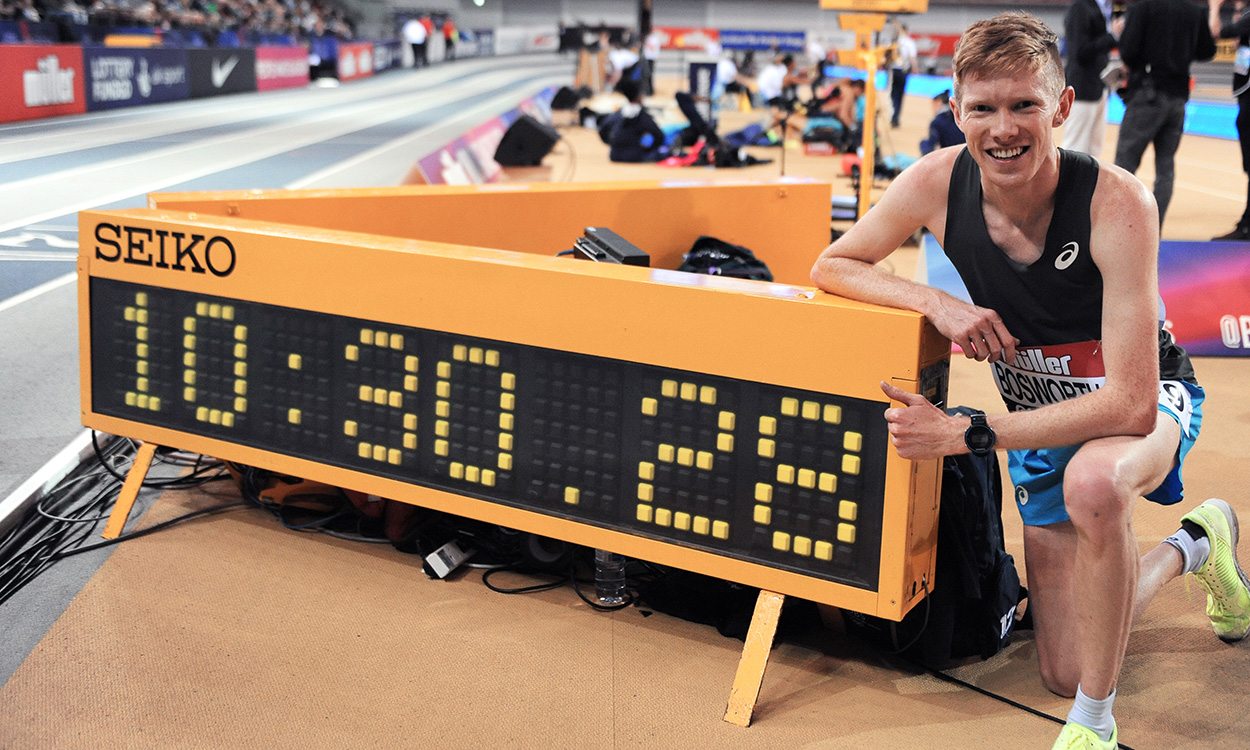 Race walking might not always gain the athletics spotlight but Tom Bosworth is doing his best to attract attention and on Sunday he produced a remarkable world best for the 3000m walk at the Müller Indoor Grand Prix in Glasgow.

Having improved his own British 5000m record last week, the 28-year-old produced the goods again in spectacular fashion, charging his way to a time of 10:30.28.

He had to do much of the work himself but Bosworth used the encouragement of the crowd to help him set new standards.

“I cannot believe it; with five laps to go I thought it had gone,” he said after beating the 10:31.42 set by Germany’s Andreas Erm in 2001. “I’m over the moon to get a world record but I feel so sick after that. I would have been happy with a British record so to come away with a world record is very special. I need to thank my team and family; they support me every day to do what I love. I’m motivated every day to get better and I’m so pleased to see our hard work pay off.

“Race walks struggles to get enough airtime – there is so much talent in the UK at the moment so this event in Glasgow has really showcased the sport at its best.”

Bosworth was followed home by fellow Brit Callum Wilkinson in a personal best of 10:52.77, with Lithuania’s Marius Ziukas third in a national record of 10:56.30.

Sprinter Su Bingtian of China suggested he will be a force to be reckoned with at the IAAF World Indoor Championships, running a stadium record of 6.50 to take 60m victory ahead of American duo Michael Rodgers (6.54) and Bryce Robinson (6.56).

The mark is still some way off the 6.34 world record set by Christian Coleman recently but Su, who captured the IAAF World Indoor Tour title, said: “I really enjoyed the meeting; it is a special moment to win the Tour. Today’s race felt much better than my previous races; I head into the World Indoors confident.”

Britain’s Ojie Edoburun was fourth in a personal best of 6.56, while CJ Ujah warmed up for Birmingham with 6.57 for fifth.

“The race was a bit of a blur,” said Ujah. “I was a bit tired and now I need to go back and recover, I had three runs last week and that’s my second run of this week, now I need to get ready for World Indoors.

“I feel I can go in next week and do a little better than that, I know I’ve got Worlds next week and I’ll build on that from here.

“I wouldn’t call myself an indoor runner but I’ll roll with the blows. My main focus is on the outdoor season. I had a great season last year and I know what the bigger picture is.”

Jamaica’s Ronald Levy came out top in a close 60m hurdles contest, claiming victory in 7.49 ahead of USA’s world 110m hurdles record-holder Aries Merritt with 7.58. Andrew Pozzi was third in 7.60 as newly-crowned US champion Jarret Eaton hit a hurdle and fell.

“It’s not the race I was looking for but we’ll carry on our preparations for the World Indoors,” Pozzi said.

Grant Plenderleith is still getting used to the idea of running at the World Indoors after his late call-up to the British team, and he got some valuable top-level experience in Glasgow.

Fred Kerley produced an impressive 400m stadium record as he led from the off to clock 45.86. Slovenia’s Luka Janezic was second in 46.29, with Dontavius Wright third.

Plenderleith notched a mark of 47.28 in front of his home crowd to come fifth as he prepared for 4x400m action in Birmingham.

Contesting the 800m, Jake Wightman set himself up well for 1500m World Indoors action with a personal best of 1:47.69 in coming third.

This was only the second 800m he has ever raced indoors and he couldn’t stop the Polish duo of Adam Kszczot and Marcin Lewandowski. Kszczot’s 1:47.15 meant he also won the Tour title.

“I didn’t really know what to expect because I have only been racing 1500m this year,” said Wightman. “I knew I’d done the speedwork but the tough thing was the positioning. If you get it wrong, it’s hard to get out of there which I found out on the last lap. Third isn’t too bad and I’ve only been beaten by two very experienced 800m racers so I felt like I held my own today. I’d like to be more competitive at the front in future.

“I see myself as an 800m and 1500m runner so it has been a great opportunity to come back to Scotland and race one here; it was the perfect prep.”

» Read about women’s events action here and the men’s long jump here. See the March 1 edition of AW for further coverage from Glasgow