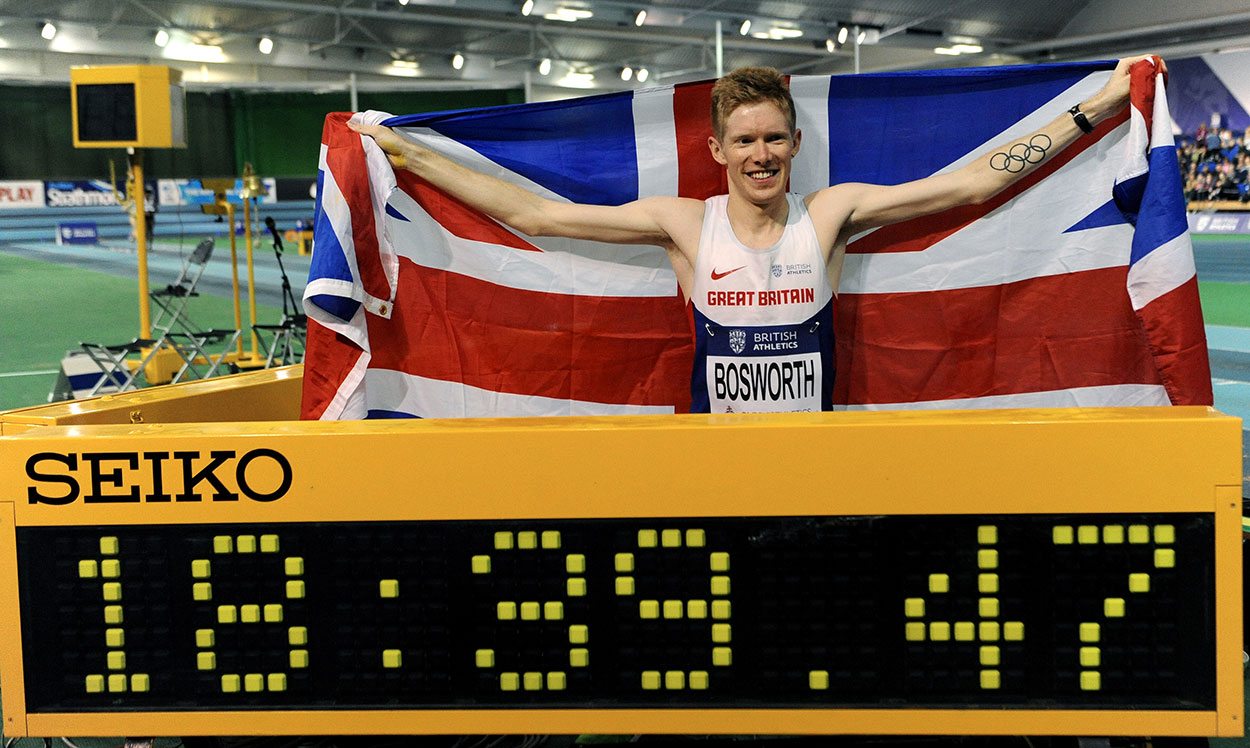 Tom Bosworth produced the performance of the championships, smashing his British 5000m race walk record and setting a world lead of 18:39.47 in Sheffield on Sunday (February 12).

It puts him in the world all-time top 30 and meant the 27-year-old was operating at well inside six minute-miling pace and won him a $2500 bonus for setting the record.

Now knowing he had the record, the Olympic 20km sixth-placer seemed to be enjoying himself and even picked up the pace as he went through 4000m in 15:00.14.

Despite some early celebrations, that final kilometre was easily the fastest at 3:39.33 and he carried on his celebrations after the finish.

He won by 70 seconds from world junior champion Callum Wilkinson, who clocked 19:49.23 which was well down on his recent under-23 best.

“I’m delighted to break that British record,” said Bosworth. “I have to thank the crowd because they really did spur me on to achieve that time.

“I am in a really good position. That was a world lead today by some way but I knew I was capable of it.”

The top event in terms of overall quality was the women’s long jump and it was a pity that world medallist Shara Proctor limited herself to the 60m.

Katarina Johnson-Thompson, in her first competition since Rio, competed well but ultimately just lost out on gold. She took the lead with a 6.69m third-round jump which held the lead until the penultimate leap of the competition.

World indoor bronze medallist Lorraine Ugen had a quality series with all six jumps over 6.55m and her final one of 6.72m pipped Johnson-Thompson, who responded well with a 6.68m with the last jump of the competition. Both athletes secured selection for the European Indoors. 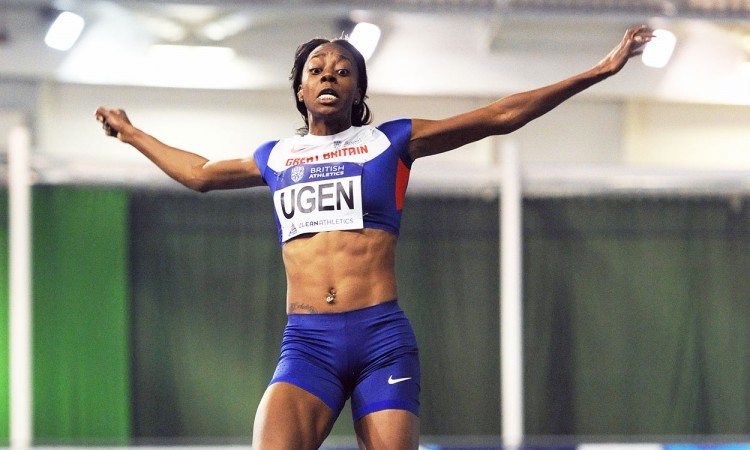 Jazmin Sawyers showed no ill effect from her exertion on TV programme The Voice UK and finished third with 6.54m.

“It was quite a consistent series today which was good,” said Ugen. “Considering it was my season opener I felt quite happy with the distances. I think it was my furthest season opener so far.”

Johnson-Thompson also competed in the 60m hurdles. She won her heat in 8.42 but didn’t contest the final as the long jump didn’t conclude until quite close to the scheduled final time.

The final was won easily by world junior semi-finalist Molly Courtney in a PB 8.32.

The men’s pole vault was a good competition in terms of depth with six going over 5.32m but the winning height was a disappointing 5.43m as Luke Cutts won on countback from Max Eaves. Harry Coppell set a PB 5.32m to win bronze on countback.

The women’s 400m was won by Eilidh Doyle, who had to work hard to win in a front-running 52.63. The Nielsen twins took the other medals as Laviai Nielsen edged her sister Lina.

Laviai guaranteed her Belgrade spot alongside Doyle with 52.86, with Lina setting a PB 52.89 which should mean she will be in the 4x400m squad.

In the women’s 3000m race walk, Heather Lewis built a good lead with a fast 4:14.85 kilometre. She couldn’t maintain that pace and her second was 18 seconds slower. Gradually Gemma Bridge began to close the gap and was only about 10 metres back with just over a lap to go when Lewis was disqualified.

Bridge won in a PB 13:23.59 with Emma Achurch taking the silver just ahead of Tatyana Gabellone.

A first-time clearance at 2.25m gave Allan Smith the men’s high jump title. Robbie Grabarz, returning from his appendix operation, finished second on the same height, having only cleared it on his second attempt. Grabarz has the necessary outdoor standard and will surely be added to the British team for Belgrade.

Behind him, there was a big breakthrough for 18-year-old Markhim Lonsdale who came from a long way back with a very strong finish. His 1:49.05 was an outright PB and moved him to fourth all-time in the UK indoor under-20 rankings, replacing Spencer Thomas, who he caught on the line for second. Teenager Thomas also ran a PB of 1:49.12.

Olympian Tom Lancashire easily closed it down and made a valiant attempt to pick the pace up in the last 400m, passing 1200m in 3:05.89. However, the early pace had been too slow and Giles breezed past 120 metres out. Lancashire took the silver medal with 3:46.45.

Eilish McColgan tried hard to add the 1500m crown to her 3000m of the day before but she couldn’t cope with Sarah McDonald’s last 200 metre speed.

Jarryd Dunn controlled the 400m and won in 46.99 after a 22.18 opener but just missed the euro qualifier of 46.90. Cameron Chalmers was second with 47.31, with third across the line, Jamie Bowie disqualified.

Predictably the first of the 16 titles on offer during the day went to Scott Lincoln, who threw 18.76m in round three of the shot put. Youcef Yacat set a PB 18.22 to take the silver medal.

Another favourite, Alexandra Russell, won the triple jump and she improved her PB to 13.27m to take the title.

The men’s 200m was a disappointment. Edmond Amaning appeared to have won his semi final in a PB 20.98, but a wobble off the bend meant he left his lane and was disqualified.

The final was won by Italian-qualified Antonio Infantino in 21.05, with Connor Wood setting a PB as the best Briton with 21.19 in second.