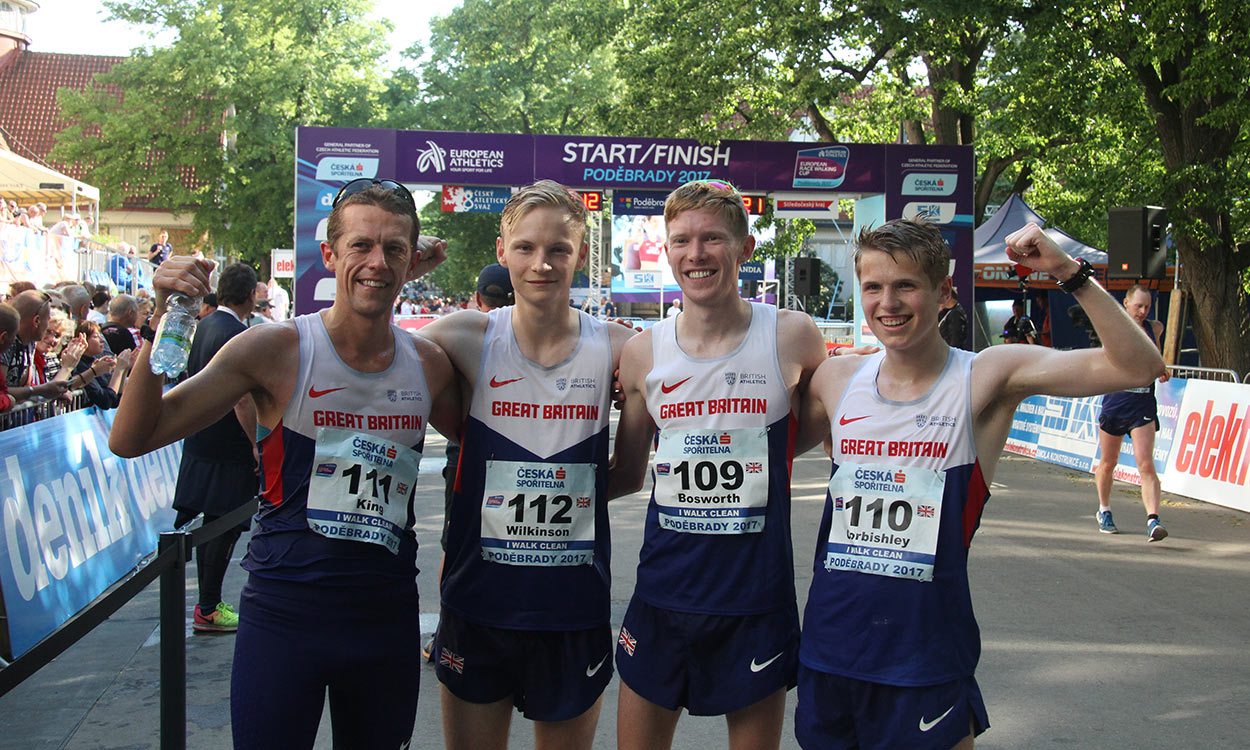 Tom Bosworth finished fourth in the men’s 20km race walk at the European Race Walking Cup in Podebrady on Sunday, recording the highest ever placing by a British athlete to also lead the men’s team to a fourth place in the team competition, reports Ian Richards.

Bosworth set of at the front of the lead pack and was joined by teammate Callum Wilkinson at the front for the first three laps. Bosworth passed the 5km mark in the lead pack of nine with all the main contenders in attendance in 20:19. Wilkinson was in the second pack, passing the quarter distance in 20:26, with Cameron Corbishley in 21:12 and Dominic King in 21:25.

By 8km the lead pack was down to six as pre-race favourite Christophe Linke of Germany began to increase the pace. By halfway Linke had moved into the lead with a time of 40:04 as Bosworth was in the chase pack of 40:16.

Bosworth slipped back to sixth on the 12th lap, but recovered to move into medal contention in fourth at 13km. However, an increase in pace from Miguel Lopez of Spain, Kevin Campion of France and Perseus Karlstrom of Sweden saw Bosworth unable to go with them as he slipped to sixth.

In the battle for the minor medals, Campion was disqualified leaving the way clear for Lopez to take the silver in 80:21 ahead of Kalstrom with 80:40. This moved Bosworth up to fourth as he clocked 81:22.

Behind him, Wilkinson recovered from his fast start and finished in the top 10 with a British under-23 record of 82:17 that moves him to fourth on the UK all-time list.

This saw Britain finish a best-ever fourth in the team competition, just missing out on the bronze to Ireland by five points.

“Despite finishing fourth I am very disappointed,” said Olympic sixth-placer Bosworth. “My hip was tight and it meant I couldn’t respond as I would have liked when the others picked the pace up.”

Wilkinson said: “That is the perfect race. I am only 20 years old and this is just my second 20km ever. To walk alongside and beat Rob Heffernan and finish 10th was awesome. I now look forward to securing my place on the team for London.”

Italy’s Antoella Palmisano produced a dominant display in the women’s 20km, breaking away from the lead group on the second lap as she won by nearly 2 minutes in 87:57. This would have been a personal best if it was not for the fact she stopped to pick up the Italian flag she dropped in the home straight!

Behind her, Portugal’s Anna Cabechina took the silver in 89:44 ahead of Laura Garcia-Caro of Spain with 89:57.

Britain’s Bethany Davies and Gemma Bridge both made positive starts walking at the back of the lead group. Davies went through the halfway point in 46:20 with Bridge just behind.

Bridge maintained her 14th place all the way to the finish to clock the third fastest ever time by a British athlete in 94:24. Davies found the last 5km tough but came home in a 22nd place with a clocking of 96:04.

Heather Lewis suffered in the second half but held on to come home in 39th as the team finished sixth, the best ever placing by a British team.

The first title of the day went to Leo Kopp of Germany who won a close battle for the gold in the under-20 10km in a personal best of 41:08. Chris Snook, making his Great Britain debut, clocked a PB of 44:23 for 19th.

The last event of the day saw an under-20 women’s 10km victory for Yana Smerdova, a Russian competing as a neutral athlete, in 46:39 as she moved away from the silver medallist Meryem Bekmez of Turkey and Teresa Zurek of Germany.

The men’s 50km resulted in a top two for Ukraine.

Ivan Banzeruk won in 3:48:15 and behind him a great battle for the minor medals played out. His teammate Ihor Hlavan was second in 3:48:38 ahead of Michele Antonelli in 3:49:07.

Ukraine took the team title ahead of Italy.