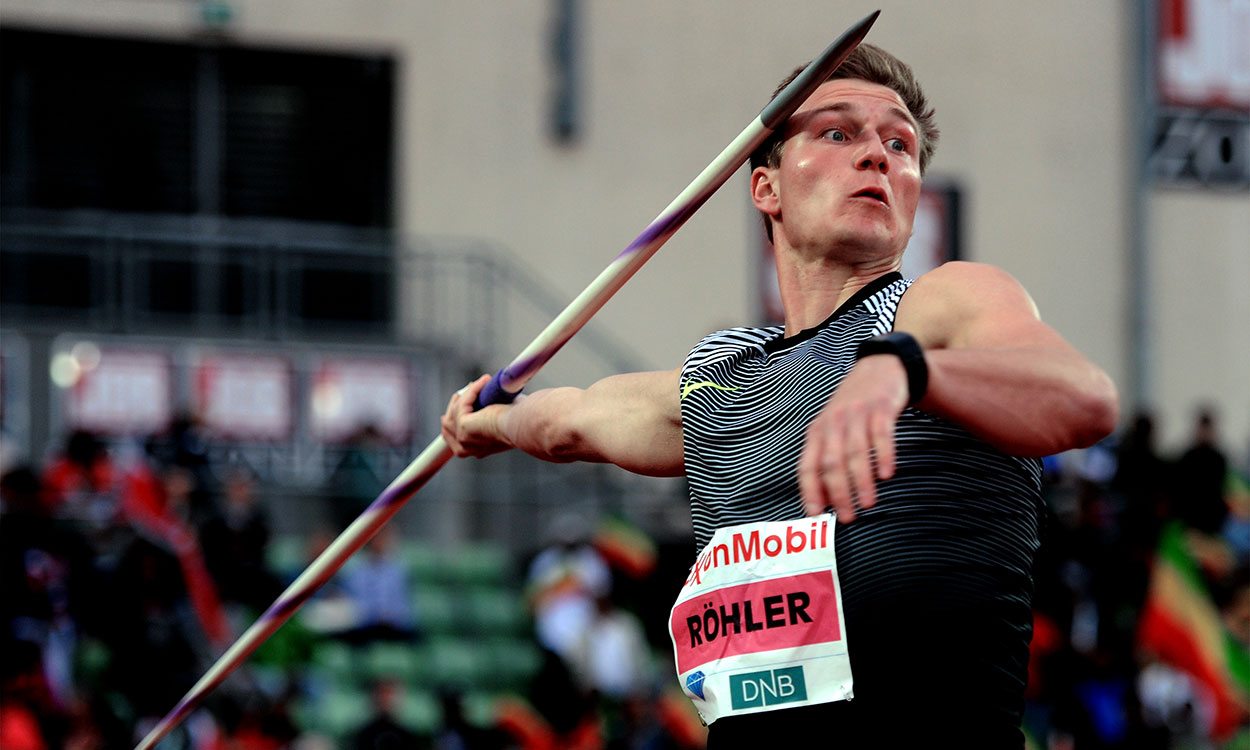 Thomas Röhler made a statement in the opening Diamond League meeting of this year’s series in Doha on Friday, throwing an impressive 93.90m to move to second on the world javelin all-time list.

The 24-year-old German, who claimed the Olympic title last summer, had a previous best of 91.28m but he leapt from 11th to No.2 on the all-time rankings behind only Jan Zelezny with his throw in Qatar.

Röhler’s compatriot Johannes Vetter had been leading the competition with his 89.68m PB in the third round before Röhler launched the implement out to almost 94 metres. Jakub Vadlejch of Czech Republic was third with 87.91m and Finland’s Tero Pitkämäki fourth with 84.26m.

“I did not see that coming,” said Röhler, who passed his final two throws. “I did not expect that in the first start of the season.

“I’m the second best ever. It will take some days to realise that.”

Records were broken in the women’s 3000m steeplechase as Kenya’s world champion and Olympic silver medallist Hyvin Kiyeng Jepkemoi just missed the nine-minute barrier, clocking a world-leading and meeting record 9:00.12 for the sixth fastest time ever recorded. Her compatriot Beatrice Chepkoech came through to finish as runner-up in a 9:01.57 PB as Bahrain’s world record-holder Ruth Jebet couldn’t hold on and finished third in 9:01.99.

South Africa’s Akani Simbine achieved an impressive sixth sub-10 second 100m this year as he secured victory in 9.99 into a headwind of -1.2m/sec. Behind him, Jamaica’s Asafa Powell was second in 10.08 and Qatar’s Femi Ogunode third in 10.13. USA’s Justin Gatlin ran 10.14 for fourth.

It was Olympic champion against world champion in the women’s 200m and Jamaica’s Elaine Thompson stormed her way to success, clocking 22.19 to Dafne Schippers’ 22.45 into a -2.3m/sec headwind. Marie-Josée Ta Lou of Ivory Coast clocked 22.77 for third, while Britain’s Desiree Henry, who has run 22.69 this season, clocked 23.22 for seventh.

USA’s world record-holder Kendra Harrison also didn’t seem troubled by the -2.3m/sec headwind or the broken bone in her hand as she eased to a 12.59 victory ahead of Germany’s Cindy Roleder, who clocked 12.90, just ahead of USA’s Sharika Nelvis with 12.91. Britain’s Olympic fourth-placer Cindy Ofili ran 13.42 for seventh after a bad start.

After the race, Harrison explained how she had sustained the injury during her warm-up.

The women’s 800m had been highly anticipated as South Africa’s Olympic champion Caster Semenya went up against world 1500m record-holder Genzebe Dibaba in the Ethiopian’s first ever 800m race.

As it was, there was no contest as Semenya, who was last year’s Diamond Trophy winner in the event and was unbeaten over the distance in 2016, continued her dominance, clocking a world-leading meeting record of 1:56.61 ahead of Kenya’s Olympic bronze medallist Margaret Wambui’s 1:57.03. Dibaba’s 1:59.37 placed her fifth, behind Kenya’s Eunice Sum and Ethiopia’s Habitam Alemu. The race was paced by Britain’s Jenny Meadows.

The first Diamond League event of the evening had been the women’s shot put and that saw success for USA’s Olympic champion Michelle Carter, who threw a 19.32m season’s best. Meanwhile, the first Diamond League track action resulted in a 400m win for Steven Gardiner of Bahamas as he clocked 44.60 to beat USA’s LaShawn Merritt with 44.78.

Victory in the men’s 1500m was secured by Kenya’s world silver medallist Elijah Manangoi in a world-leading 3:31.90 ahead of his compatriot Silas Kiplagat with 3:32.23. The race had been due to feature three-time world gold medallist Asbel Kiprop, but the IAAF announced his late withdrawal was due to a ‘minor hamstring tweak’.

USA’s world and Olympic triple jump champion Christian Taylor secured a win with his final leap of the competition, his 17.25m denying his fellow American Omar Craddock, who had a best of 17.08m.

Olympic champion Ekaterini Stefanidi of Greece won the pole vault with her clearance of 4.80m ahead of USA’s Olympic silver medallist Sandi Morris with 4.75m. Britain’s Holly Bradshaw placed fourth with 4.55m after first-time clearances at that height and 4.45m.