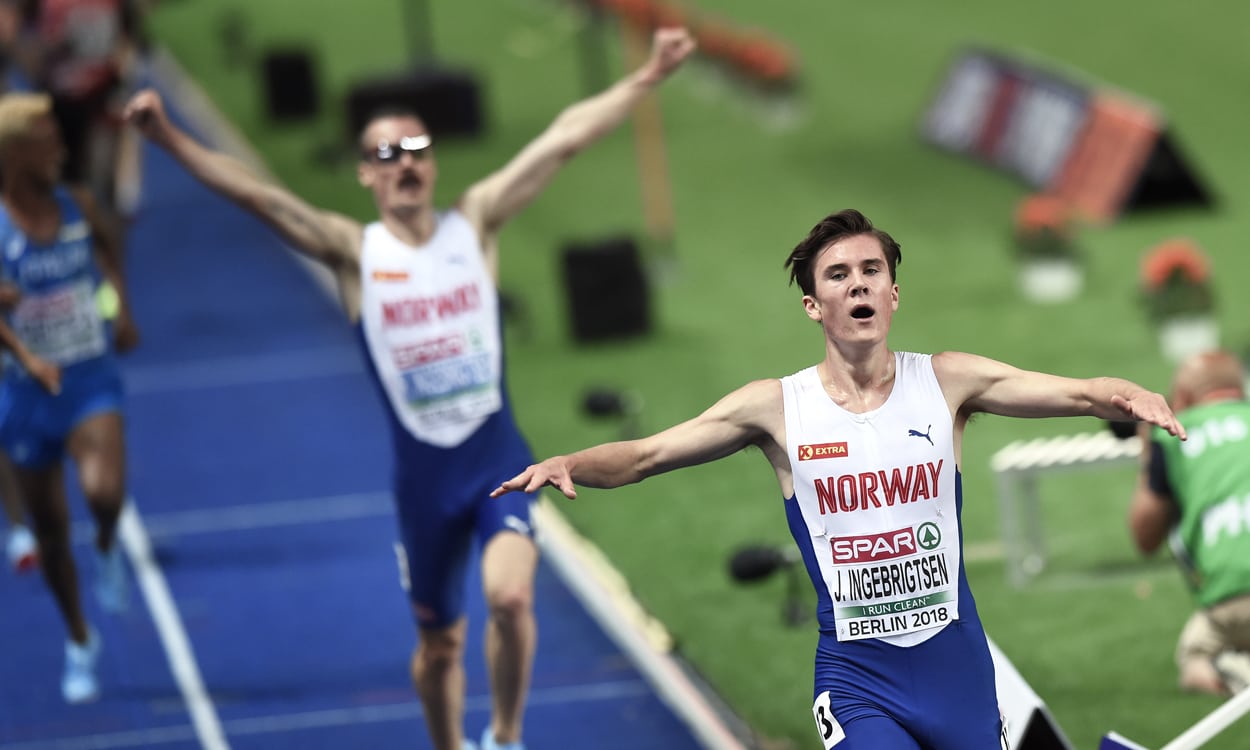 Jakob Ingebrigtsen completed an astonishing European gold medal-winning double by adding the 5000m title to the 1500m crown he had won just 24 hours previously in Berlin.

The Norwegian is 17 and competing in the first major senior championships of his career but the athletics world is already beginning to run out of superlatives for a youngster who runs with a maturity way beyond his years.

It will be intriguing to see how he develops and performs in the world and Olympic environment in the next two years but for now it would appear athletics has found a new superstar.

As with the 1500m, he looked in total control and a subtle gear change in the latter stages simply saw him glide away from the competition, completing the last 800m in 1:56 to clock 13:17.06, a European under-20 record.

His elder brother Henrik was one of the few who could manage to stay with him and secured silver in 13:18.75, with recently-crowned European 10,000m champion Morhad Amdouni third in a season’s best 13:19.4.

At just 17 @JakobIng has doubled up at the European championships!

“I’m 17 years old and already have two European titles at senior level,” said Jakob Ingebrigtsen, whose brother Filip did not contest the 5000m through injury.

“It was a little crazy to get this medal today, this is huge! Winning a second title in two days is also the result of having done this my whole life.

“Unfortunately, my other brother couldn’t be here today because he broke a rib, and this is completely out of his control. Believe me, we started preparing for the 5km final as soon as we crossed the line on the 1500m last night.”

Silver for Britain in 4x400m

There was no individual British success on the penultimate night of these championships but, as is becoming customary, the 4x400m relay line-up secured a podium place – this time the silver medal.

The line-up of Rabah Yousif, Dwayne Cowan, 400m European champion Matthew Hudson-Smith and Martyn Rooney clocked a season’s best of 3:00.36 to finish behind a Belgian side including Borlee brothers Dylan, Jonathan and Kevin which ran a European leading 2:59.47. Spain were third in 3:00.78.

Britain appeared to have their work cut out after an awkward second handover in which Cowan had moved inside but then had to come back out to get to Hudson-Smith. However, Rooney produced his traditionally impressive anchor leg to power past the Spaniards.

“It was a scrappy race – I think a lot of teams went out to get in our way, that was their tactic and they made it hard for Dwayne but he held his head,” said Rooney. “Matt was in a tough, tough space – he’s a free flowing runner – he needed to have space to run and I think everyone just tried to get in front of us for the first three legs!”

Cowan added: “I had to check my run three of four times in that last bit so I lost a lot of time. I had to check in and give it to Matthew at the last minute, it was a bit risky but I had no choice. We got the silver and is better than last year when we won bronze (at the world championships) and hopefully next year it can be gold.”

Poland are enjoying a very successful championships and Adam Kzsczot added another gold to the tally, storming to his third consecutive European 800m title in impressive fashion.

It was the Frenchman who had made the first significant move, striking for home at the bell, but Kzsczot calmly breezed past him on the bend and the identity of the winner was not in doubt. Kramer took advantage of Bosse paying for his early charge to move into the silver medal position.

“I am so glad managed this final today and defended the title,” said Kzsczot, who had been struggling with an Achilles problem. “I did something that nobody else has done before – I won three titles in a row and I feel so emotional to make this history.

“To win this title was four times harder that the one in 2014. Always, it is getting harder and harder. It is a very special moment in my career too.”

There was also a very special moment in the career of Germany’s Mateusz Przybylko, who was cheered to the rafters by another big Berlin crowd when he won high jump gold.

The world indoor bronze medallist landed his prize with a first-time clearance of 2.35m which equalled his personal best.

European under-20 champion Maksim Nedasekau of Belarus won silver with a personal best of 2.33m, while neutral athlete Ilya Ivanyuk also set new standards for himself by clearing 2.31m.