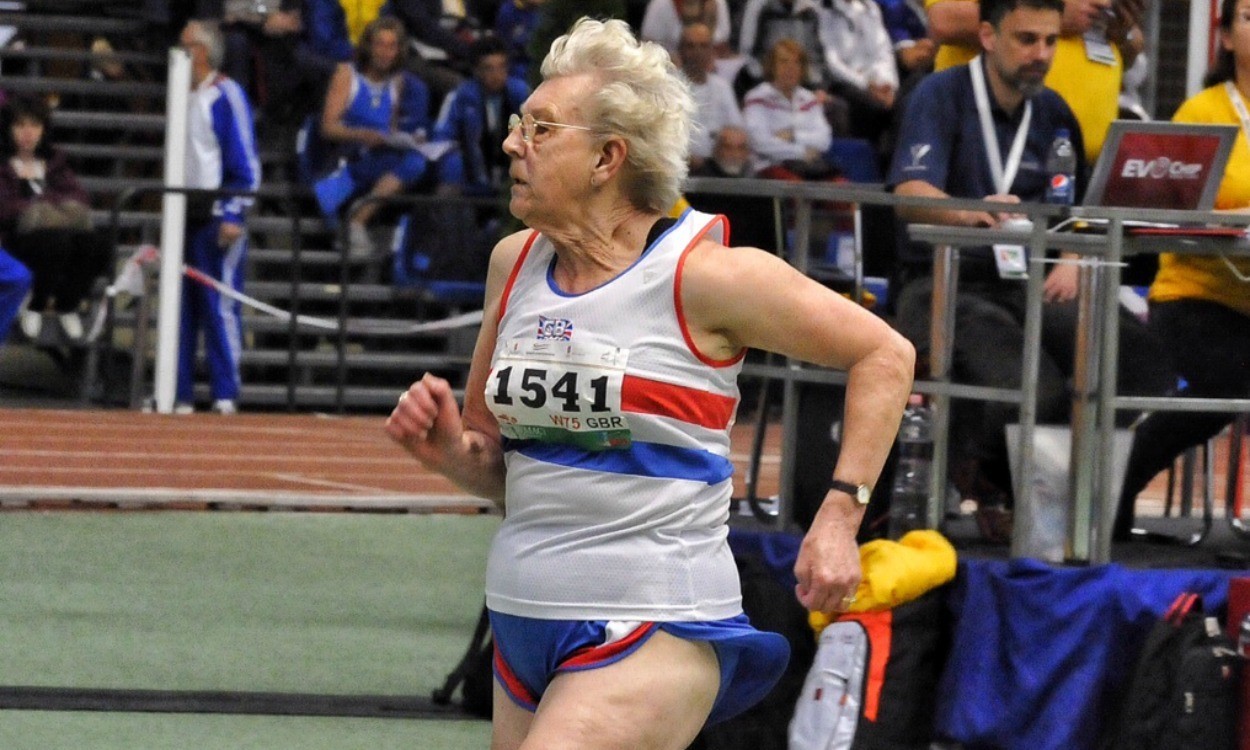 Irie Hill won the gold medal in the W45 pole vault with a world record height of 3.55m on the second day of World Masters Championships action in Budapest.

Hill had a perfect record over the early heights and the gold medal assured as she cleared 3.40m. She also went over her world record height at the first attempt before her first unsuccessful heights at 3.60m.

Teresa Eades won the W55 pole vault with a clearance at 2.55m. Alan Leiper won the M50 silver medal as he cleared 3.80m.

The 60m events normally are a big success for Britain but unusually they only scored one gold medal with Dot Fraser, pictured above, winning the W75 event in 11.55 as she fought off the challenge of Kiwi Judy Hammond who timed 11.63.

Britain took silver medals in the two youngest events. Mark Findlay, who has 10.25 100m PB and ran for Britain in the World Indoor Championships in 2006 and was a former world junior medallist at 200m, retired in 2012. However, he started training in the new year and had no races until reaching Budapest. In the final, he got a poor start and couldn’t quite claw back the gap on Brazilian Rodrigo Fellini as he timed 6.95 to the winner’s time of 6.92.

Ellena Ruddock also couldn’t quite make up for her start in the W35 60m as American Brandi Bernert won in 7.75 to the Briton’s 7.80.

Britain won two medals in the W55 60m as Averil McClelland took second in 8.78 and Carole Filer bronze in 8.87. Caroline Powell won W60 silver with a time of 9.03. Mark Collins won bronze in the M40 60m with 7.22 as the raced started at the seventh attempt after a string of false starts and gun problems.

Britain had a more successful time in the 3000m walks where the best event was the M65 race. Ian Richards won comfortably in a top class 14:23.80 and John Hall was a clear second in 15:34.6. Out of 32 competitors, Britain had four of the first six.

M75 Arthur Thomson has won many medals over the years but he had one of his closest battles as he won in 17:09.31, taking gold by less than three seconds.

Gaye Clarke won gold in the W50 pentathlon, claiming victory with 3465 points to win gold by 82 points, while Leanne Buxton took the gold medal in the W35 pentathlon event by the margin of 40 points with a score of 3563 points.

In the 800m semi finals, Britain look set for a number of medals for Thursday’s finals.

World outdoor M40 record holder Anthony Whiteman went from fourth to first off the final bend and shut down in Usain Bolt style to a halt on the line to win his heat in 2:03.44.

Another former international James Thie, who finished fifth in the World Indoor 1500m Championships in Budapest ten years ago, impressively won his M35 heat in 2:00.81.

Pete Molloy, who lost gold in the cross-country after going off course, was the fastest of the M65 qualifiers with his 2:28.68 clocking while W50 world record holder Clare Elms was the fastest qualifier in her category.

However, before the Thursday 800m finals, all four will be running 3000m finals on Wednesday afternoon.

» Image of Dot Fraser by Tom Phillips, with further photos from the World Masters Championships available for viewing via @TomSprints on Twitter