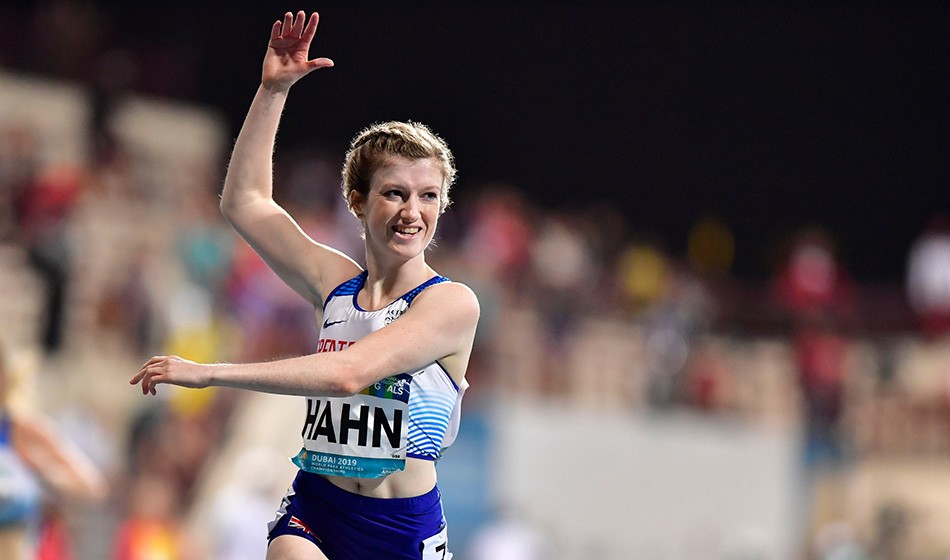 Ahead of competing at the World Para Athletics Championships in Dubai, Sophie Hahn told AW that her focus was on maintaining her grand slam of major titles by gaining another gold and that a world record would be a bonus.

On Tuesday evening she achieved both, storming to a time of 12.38 to improve her own global best of 12.43 recorded in May and gain a fourth consecutive T38 100m title.

“It was incredible. I did not expect to run that time,” she said. “I wanted to win the gold but I didn’t know if the world record was possible.

“I’m so happy that all the work I have put in has paid off,” added the 22-year-old, who has been coached by 2010 Commonwealth 200m champion Leon Baptiste for the past year. “It is just amazing.

“This medal is very special to me. I need to rest up now to be ready for my 200m and make that final. It’s going to be another tough challenge but I’ll give it my all.”

A fourth world @ParaAthletics 100m gold and another world record ✅
Next up, the 200m…@SophieHahnT38 had a quick chat with @stuartweir after her 100m success in Dubai on Tuesday #Dubai2019 @BritAthletics pic.twitter.com/itsjJ9y5tX

Another world record-breaker on day six of the championships was Brittni Mason as she ran 11.89 to win the T47 100m and improve on the record mark of 11.92 set by her fellow American and T46 class athlete Deja Young in the heats.

Both world record-holders got gold in the T53 800m events as Canada’s Brent Lakatos claimed his 13th world title in 1:40.59, while Australia’s Madison de Rozario broke the championship record with 1:52.15 to win the women’s final.

“I’m just happy to be here after everything I’ve been through,” said Chiassaro. “To come out with a medal from it is good.

“There are some really fast guys in that race, any one of them could have come out in the medal position, so I’m really pleased with third.

“It just shows I am still medal potential after issues last year. I went from setting European records to pulling out of Europeans with illness. I’m going to relish every minute on that podium.”

Earlier in the day, Vanessa Wallace had also added to GB’s medal tally with a bronze in the F34 shot put, secured after a PB throw of 7.66m in a competition won by China’s world record-holder Zou Lijuan with a championship record of 8.76m.

Brazilian athletes claimed a clean sweep in the men’s T47 100m, with Petrucio Ferreira following up his 10.42 world record in the heats with a 10.44 performance to get gold ahead of Washington Junior (10.58) and Yohansson Nascimento (10.69) as GB’s Ola Abidogun was sixth.

“This is a moment of total happiness for our country and for us,” said Ferreira. “Top three podium for Brazil and all three of us qualified to Tokyo 2020, can’t ask for more.”

Born in Congo, Kashafali and his family left the country in 2004 and settled in Norway and his para athletics debut came in May when he also set a world record.

Making her return to global competition after the birth of her son, Edward, in April, Britain’s double Paralympic champion Libby Clegg and her guide Thomas Somers ran 26.69 in their T11 200m heat to qualify for the semi-finals.

“It was very ropey but I’m very happy with it,” said Clegg. “It was hard work. Because I’ve not been on the international scene for so long, I was really worried going into it.

“To be honest, I wasn’t really sure if I would make it through to the semi-finals. Just to be here is just amazing. Edward is seven months old tomorrow, so I didn’t think seven months ago I would be here. It has taken a lot of hard work to get here. It’s all pretty bonkers.

“I’m hating being away from home right now but there is a goal and that is the Paralympics. At least I know I can leave him and I don’t get horrendously emotional, just a bit moody.”

Germany’s Irmgard Bensusan won the T64 100m in 12.86 as GB’s champion from London 2017, Sophie Kamlish, was sixth, while German-born Vanessa Low won the T63 long jump with a best of 4.68m while making her major championships debut for Australia.

“Australia is my new home and it’s amazing to be part of the team and celebrate now as part of this team,” said Low, who is married to fellow athlete Scott Reardon. “Competing now for the same country as my husband, representing the country where we live, is amazing.”