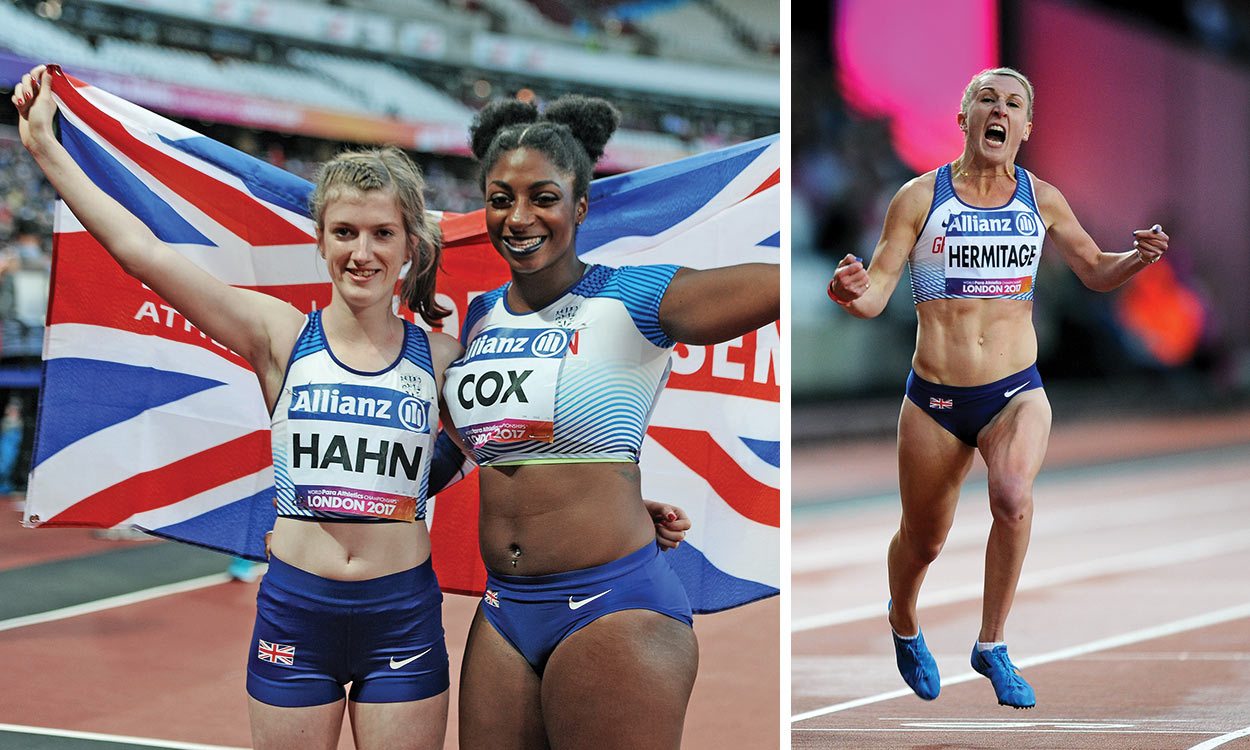 Sophie Hahn and Kadeena Cox delighted the home crowd by securing a GB 1-2 in the T38 100m on the penultimate evening of World Para Athletics Championships action in London, with Hahn breaking the world record in the process.

After a typically strong start, Hahn continued to storm away and crossed the line with 12.44 on the clock to improve her own global mark. Her 200m crown last weekend had also been won in a world record-breaking time.

Behind her, team-mate Cox clocked 13.07 to complete the medal set after she had won the 400m title the evening before and 200m bronze on Saturday.

“I am so happy to win this title,” said 20-year-old Hahn, who has cerebral palsy. “I’ve been off for a week so waiting to get out here again has been difficult. To do the double of 100m and 200m is just phenomenal.”

Cox added: “I knew that Sophie was the favourite for the gold and I wanted to get the 1-2-3 of gold, silver and bronze here and I did it.

“To be good enough for silver behind this amazing young woman is something special.”

Germany’s Lindy Ave bagged the bronze to deny a GB clean sweep, clocking a PB of 13.16 ahead of Olivia Breen, who ran 13.33 after winning the long jump title on Monday.

‪#SophieHahn and #KadeenaCox reflect on their T38 100m ?? and share how they intend to celebrate… #London2017 #cake #icecream #bed ‬

Georgie Hermitage added yet another gold to GB’s medal haul as she followed up her T37 400m win in a world record with a championship record-breaking victory in the 100m.

Clocking 13.36, the 28-year-old, who also has cerebral palsy which mainly affects the left side of her body, beat Ukraine’s Nataliia Kobzar to complete a fantastic return to the global stage after injury struggles earlier this year.

“I am relieved that it’s all over,” said the winner. “I know that sounds like an awful thing to say but coming into this championships the preparation wasn’t ideal.

“I didn’t get the best of starts and really had to claw it back from the last 30m. But apart from that it went well and I am happy with the win.”

China’s Wu Qing won the F36 shot put after a 9.69m throw in the fourth round, while the F53 shot put title was claimed by Fatema Nedham of Bahrain after a 4.73m throw.

» Full results can be found here, while a report on this evening’s men’s events is here