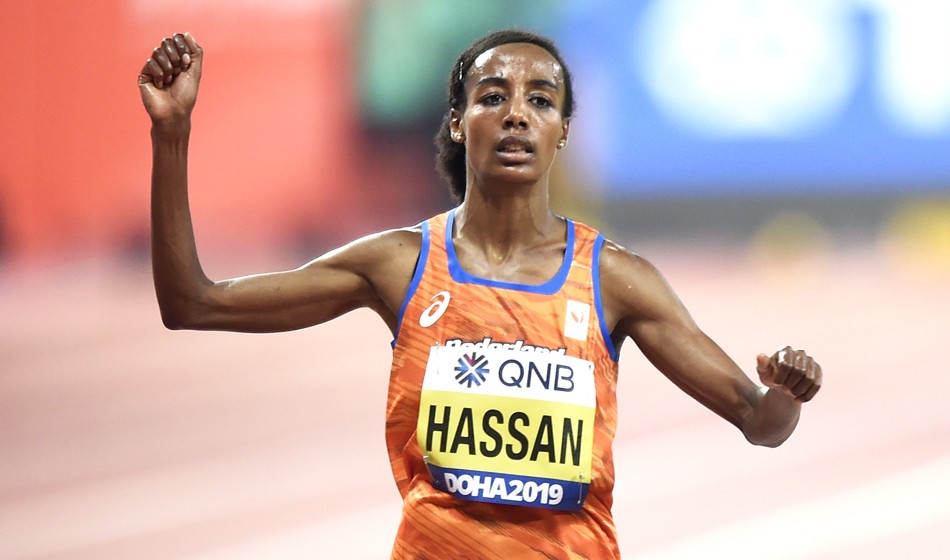 Sifan Hassan won the women’s world 10,000m title with the greatest extended finishing speed ever witnessed in a 25-lap race.

At the IAAF World Championships in Doha, she covered the last 1500m in an extraordinary 3:59.09.

Reh’s position as leader ended during the fourth kilometre as she began to slow to 76 seconds.

The Dutch athlete was caught out by the change of pace and was a few seconds back for a few laps but gradually she closed up and sat at the back of the pack.

Reh was struggling and going back (15:45.39) and she dropped out dramatically clutching her stomach a few laps later before being taken off on a stretcher.

The penultimate lap was a mere 66.16 as Hassan burst past just before the bell and began a long drive to the finish.

Briefly Gidey responded but Hassan blasted the next 200m in 29.80 and the race was over.

“What an incredible feeling. I could never have imagined how good this feels,” said Hassan. “It took a while for the race to really get going but as it passed by I got better and better. It was a difficult race but I remained calm and focused and I turned out to be the best today. I have matured over the years. I have a lot more focus now than before which really helped me today. I am just so happy.”

Back in seventh, Susan Krumins excelled to be top European-born athlete with seventh in 31:05.40 just ahead of top American Marielle Hall (31:05.71).

“I am pleased,” said Twell. “It is my second-fastest 10km on the track.

“I would have liked to have gone quicker and with the group but I stuck to my task and I was really happy with that.

“I didn’t quite have the sharper legs that I used to have for the 1500m and 5km to be able to hold on to the pace and in four weeks’ time I have a marathon so I am in a very different preparation.”

The women’s 800m semi-finals saw both Britons fail to qualify.

Alex Bell was not too far back at 600m but lost ground on the bend as she lacked her usual kick and finished fifth in a non-qualifying 2:01.23.

European indoor champion Shelayna Oskan-Clarke was well placed but slightly boxed through 400m and 600m. She was third into the straight but was starting to fade when Hedda Hynde passed her on the inside and then she lost her balance 10 metres before the line and fell heavily. She got up to finish eighth in 2:10.89 but was already out of a qualifying position.

In the final heat, former world champion Eunice Sum tried a similar control role and led into the straight though faded in the last 50 metres and was easily overtaken by Ugandan Halimah Nakaai, who sprinted impressively to an easy win in 1:59.35 from Sum’s 2:00.10.

Nakaai though was boxed into the straight and clearly pushed Natoya Goule to get a clear run and the Jamaican lost her balance.

However, as Goule got through as a fastest loser anyway, the Ugandan was surprisingly allowed to go through to the final. 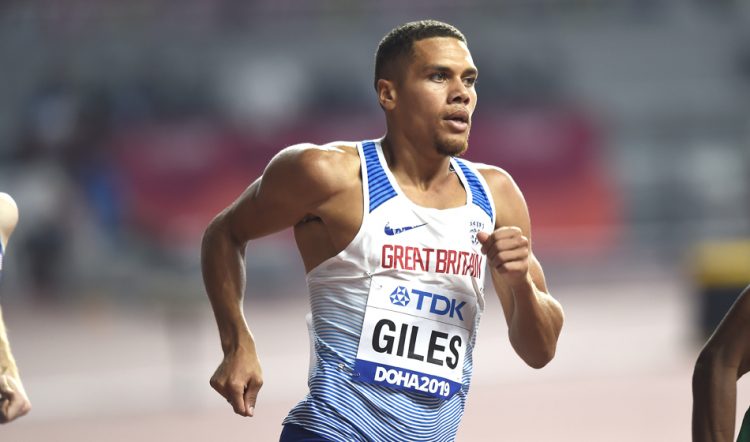 Donavan Brazier, a 1:42.70 man this year, won the opening heat with a strong finish in 1:46.04. European silver medallist Andreas Kramer was only fourth in a non-qualifying 1:46.74.

The second heat was won by world junior silver medallist Ngeno Kipngetich in 1:46.07. Close behind, Jamie Webb was well placed into the straight but had to fight hard to keep his third automatic qualifying place and his 1:46.23 just about held off USA’s Brannon Kidder’s 1:46.40 and fast finish.

The fourth heat saw Mark English run uncharacteristically from the front with 25.10 and 51.89 splits which gave him a good lead though he was fading at 600m and ended up struggling home seventh in 1:47.25.

It was close up front with Olympic fifth-placer Ferguson Cheruiyot narrowly winning in 1:45.98.

Adam Kszczot, the silver medallist of the last two championships, ran an unusually poor race for him and was only fifth in 1:46.20, despite the fastest last 100m of 12.89, though his time was good enough for a fastest losers spot.

London 2017 fourth-placer Kyle Langford, not at his fittest, found the last 100 metres tough but his 1:46.14 fifth place was sufficient for a place by time.

World leader Nijel Amos, who has run 1:41.89 this year, failed to show for his heat after reportedly suffering an Achilles injury.