Shelayna Oskan-Clarke among winners on day two at British Indoors 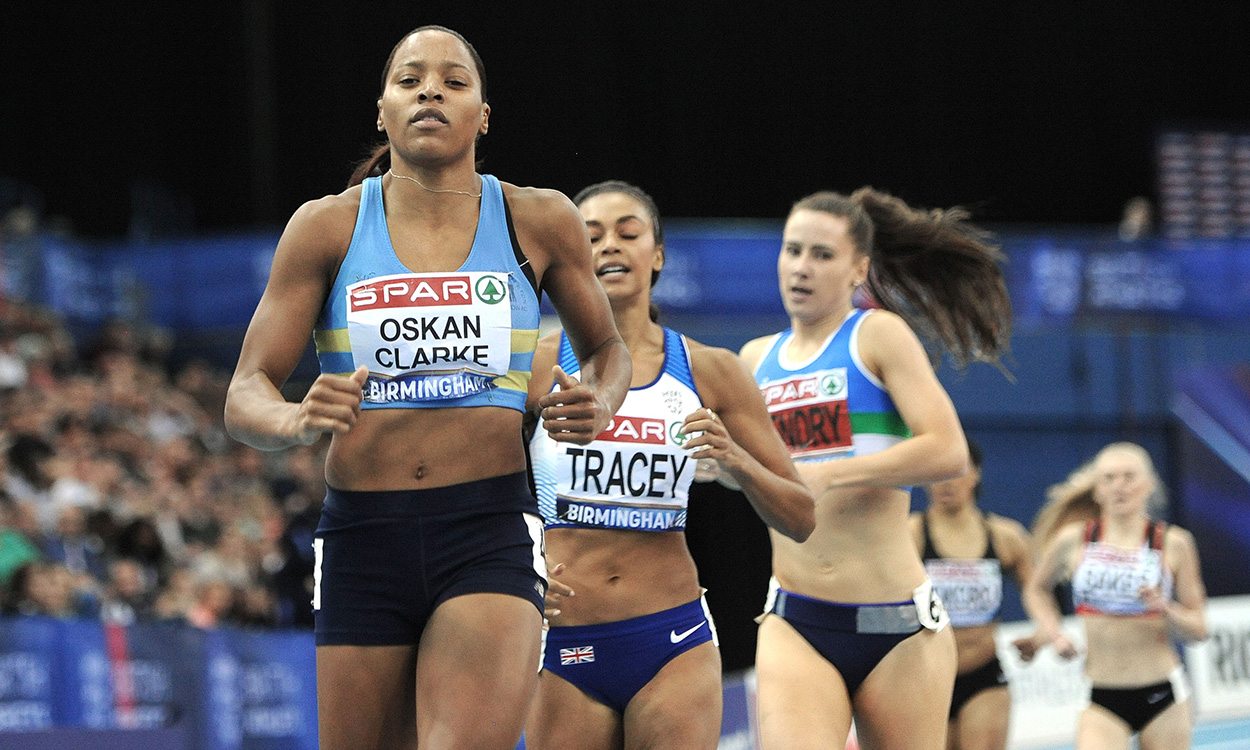 European indoor 800m medallist secures her World Indoors spot with a strong run, as does rising star Lee Thompson in the 400m

Shelayna Oskan-Clarke claimed European indoor 800m silver in Belgrade last winter and she’ll now have the chance to go for a global gong to add to her haul following her powerful performance at the SPAR British Athletics Indoor Championships in Birmingham on Sunday.

Running an indoor PB of 2:00.06 to move to sixth on the UK indoor all-time list, the 28-year-old retained her national title and won a place on the GB team for the IAAF World Indoor Championships at the same Arena Birmingham venue next month.

Such was the pace, Oskan-Clarke had led through 400m in 57.06 for a time which was quicker than the 400m split in the men’s final.

Making the most of the fast race, Scottish 21-year-old Mhairi Hendry recorded a big overall PB of 2:01.30, with her silver medal-winning time more than a second quicker than she had ever previously run. Adelle Tracey was third in 2:04.61.

“I’m very happy to have defended my title and run a time that reflects my training,” said Oskan-Clarke. “I’m trying to get better tactically and if I’m not at the front, making sure not to stress and make the moves when I’m meant to, like on the straights and not the bend like I did in the European Indoors.”

On her aims for the World Indoor Championships, she added: “I’d like to be in the final and anything can happen when you get there.”

The World Indoors qualifying time of 1:46.50 never seemed a target for athletes in the men’s 800m final but the race came down to an exciting finish.

Elliot Giles pulled away off the final bend and got the gold in 1:49.91 as Jamie Webb, who had led through 400m in 57.21, held on for silver in 1:50.41 despite a late surge from Andrew Osagie, which almost saw the two-time world indoor bronze medallist pip him on the line.

All eyes were on the clock in the men’s two-lap final, however, as Lee Thompson ran the 400m race of his life when it mattered the most. Leading from the gun to claim victory, the 20-year-old set a big PB of 46.23 to go well inside the World Indoor Championships qualifying time of 46.70 and book his place on the British team.

It was the fastest time at these championships in 12 years.

Behind him, Sudanese sprinter Sadam Koumi clocked a PB of 46.44 in second and Jamal Rhoden-Stevens a 47.14 PB in third. 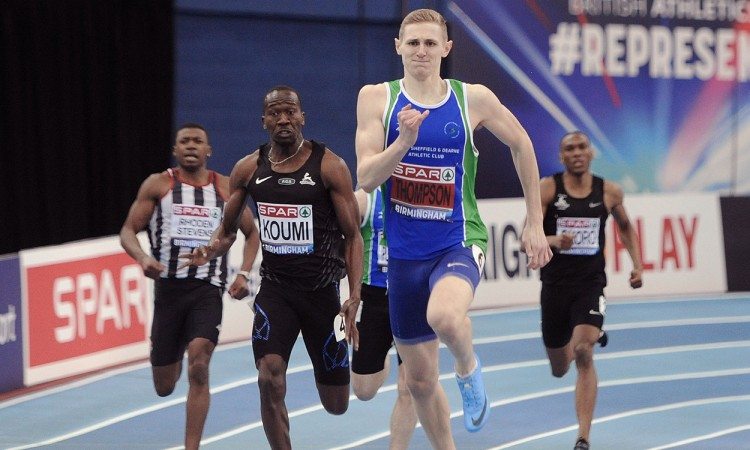 “I didn’t think I had that time in me, I’m just over the moon,” said Thompson, the bronze medallist at this event last year. “I was confident I would get the qualifying time for World Indoors but I never thought I’d run 46.23, especially not after the heats yesterday. This is just completely overwhelming.

“Going into the Worlds, my confidence is sky high. This is my first senior national title which is very special.”

An athlete more decorated when it comes to British titles came out on top in the women’s event, as hurdler Eilidh Doyle won her third national indoor gold, leading a Scottish one-two with 51.84 ahead of Zoey Clark with an indoor PB of 52.12.

Bronze was claimed by Amy Allcock in an overall PB of 52.74.

Another Scottish athlete in fine form is Eilish McColgan and the day after winning 3000m silver behind Laura Muir, the former steeplechaser unleashed a powerful kick for a dominant 1500m win. With the qualifying time already recorded, her victory in 4:13.94 ahead of Katie Snowden, Stacey Smith and Hannah England booked her a place on the GB team for the World Indoors.

“I’ve been struggling with a cold all week but I feel like the two races have really helped me to get through it. I will be working really hard over the next two weeks to make sure I continue my best ever form into those World Indoor Championships.”

Andrew Heyes was the winner of the 17-strong men’s 3000m as he clocked 7:54.81 ahead of Philip Sesemann and Lewis Moses.

“The two lads at the front went to go and run the time and fair play to them but I was there to win today, if the time came, it came,” said Heyes, with the World Indoors standard at 7:52.00. “I did try to get my skates on in the final 600m to close the gap but I wanted to win these champs and my coach told me to leave it a bit later to break but I fancied it and luckily I pulled away. It’s my first British title and I’m thrilled.”

Morgan Lake described her high jump victory as “bittersweet” as the world and Olympic finalist had hoped for more than her 1.88m winning height.

Her three first-time clearances at 1.80m, 1.84m and 1.88m got her the gold ahead of Bethan Partridge silver and Emily Borthwick, both with 1.80m, but she had three unsuccessful attempts at 1.92m.

“I’m really happy to be British champion but felt I could jump higher,” she said. “All three of us (medallists) train together and it’s nice for all of us to get a medal and be on the podium. If I do get selected for the World Indoor Championships it would be amazing but we’ll see. Outdoors the Commonwealth Games is my biggest target along with the Europeans again in the summer.”

After a gap of 11 years the national men’s triple jump title was back with Nathan Douglas as he recorded his best indoor leap since his silver medal-winning performance on the same runway at the 2007 European Indoor Championships.

His 16.77m might have been the only mark he recorded during the competition but it was enough for victory ahead of Julian Reid with 16.54m and Lawrence Davis with 15.68m.

“It is always nice to be British champion,” said Douglas. “I was feeling good today so I thought a 17m-plus jump was possible, but I took the decision to stop after four jumps because I didn’t want to risk anything.

“I wanted to do World Indoors – that’s the reason I’m lining up here. Some of those fouls were close so maybe if they had gone in, I’d have got that standard.”

Back on the track, after her sixth-place finish in the 60m the day before Finette Agyapong clocked 23.30 to claim the 200m title ahead of Meghan Beesley with 23.57.

Victory in the men’s race went to Antonio Infantino in an indoor PB of 20.77 – a time which places him fifth on the Italian indoor all-time list – ahead of Edmond Amaning with 21.04.