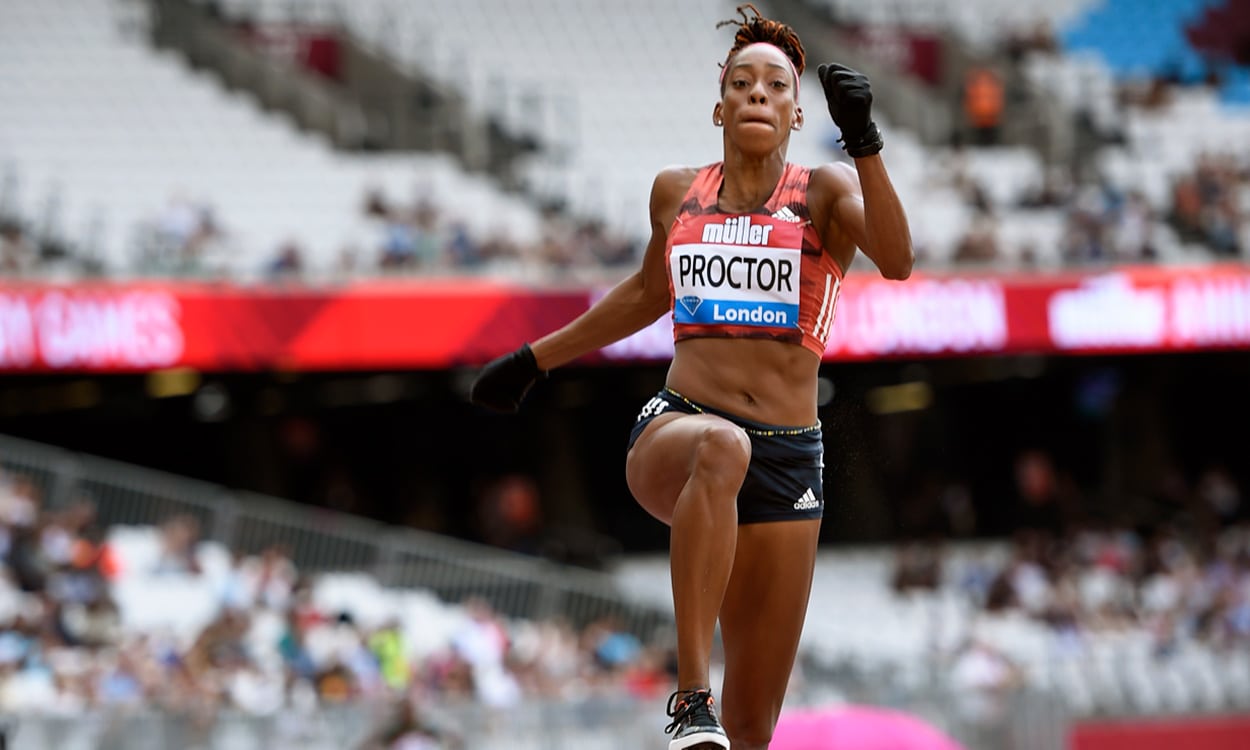 Shara Proctor dominated a high-class long jump competition with a brilliant series as she hit her best form of 2018 at the Müller Anniversary Games.

With superb precision on the board, the 2015 world silver medallist put together jumps of 6.82m, 6.80m, 6.87m, a season’s best 6.91m and 6.83m. At this stage she had the best five jumps of the competition and only dropped below this level with the competition won in her final jump where she leapt 6.64m.

World leader Lorraine Ugen struggled with her radar. After a 6.68m opener she had four no jumps. But she showed her competitive mettle with her final jump which was measured at 6.88m to go close to Proctor and snatch second.

In fifth, Commonwealth heptathlon champion Katarina Johnson-Thompson set a season’s best of 6.70m while Jazmin Sawyers made it four Britons in the top six with a 6.62m leap.

“It was fun today,” said Proctor. “I love competing in this stadium. The runway felt amazing, the crowd was amazing and I finally put it together and felt comfortable on the runway and I showed what I’m capable of. I got my mind together and perfected it.”

In the 100m the 2008 and 2012 Olympic champion Shelly-Ann Fraser-Pryce showed she is still capable of top-class victories when she won in 10.98.

“I cannot complain because I haven’t raced for ages and I’m happy that the run today was under 11 seconds,” said Fraser-Pryce. “It’s hard work racing after having a child but it’s not as though it’s anything I’m not used to. I’m used to sacrificing and making sure that my path is right.

“Being a mother is my first priority and to come back and be flexible with my training is wonderful and I’m so excited about next year now.”

In fifth, Imani-Lara Lansiquot smashed her PB with 11.11 while Bianca Williams equalled her season’s best of 11.20 in seventh.

Asha Philip’s participation as an individual in the European Championships looks in doubt as she was fifth in her heat in a non-qualifying 11.36. 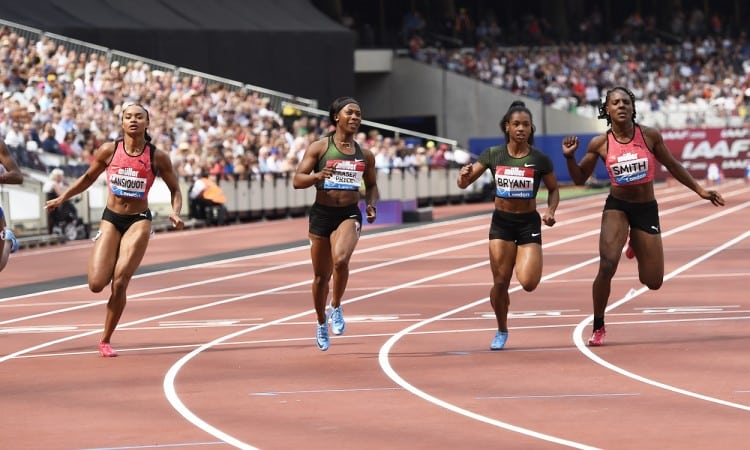 The 400m hurdles was a cracking race and saw a narrow win for the 2015 world silver medallist Shamier Little in 53.95 over Commonwealth champion Janieve Russell’s 53.96.

“It was a tough race and I put my soul into that lean for all the points,” said the winner.

As she returned from injury, Eilidh Doyle had her first race since the Commonwealth Games and was seventh in 56.18.

“It’s nice to be back but it was nerve-wracking and obviously I would like to run quicker than that,” she said.

A 61-second last lap for Kenyan Lilian Rengeruk gave her a narrow win over Netherlands’ Susan Krumins in 8:41.51 as Fantu Worku surprisingly dropped out while disputing the lead with 200m to go.

The leading duo were the only athletes quicker than Chepkoech’s astonishing world record of 8:44.32 at Monaco over 28 barriers and seven water jumps.

Jess Judd set a PB of 8:53.29 in 11th though both Judd and Courtney have run faster in mixed races.

China’s Lyu Huihui won the javelin with her 65.54m second round throw as all six of her throws were well over 60 metres.

The runner-up Nikola Ogrodnikova only managed one – a 65.36m – though she passed her last three throws.

Libby Clegg was a dominant winner in the T11 200m, claiming victory by almost three seconds in a season’s best 25.29. Following injury to her guide runner Chris Clarke, double Paralympic champion Clegg has teamed up with Tom Somers and this was only their second race together.

In the T44/47/64 long jump there was a narrow victory for Stef Reid. The World Para Athletics Championships gold medallist won with a fourth round 5.55m to edge Marie-Amelie Le Fur’s opening leap of 5.54m. Both marks were 2018 bests.

A report on men’s events action in London can be found here.