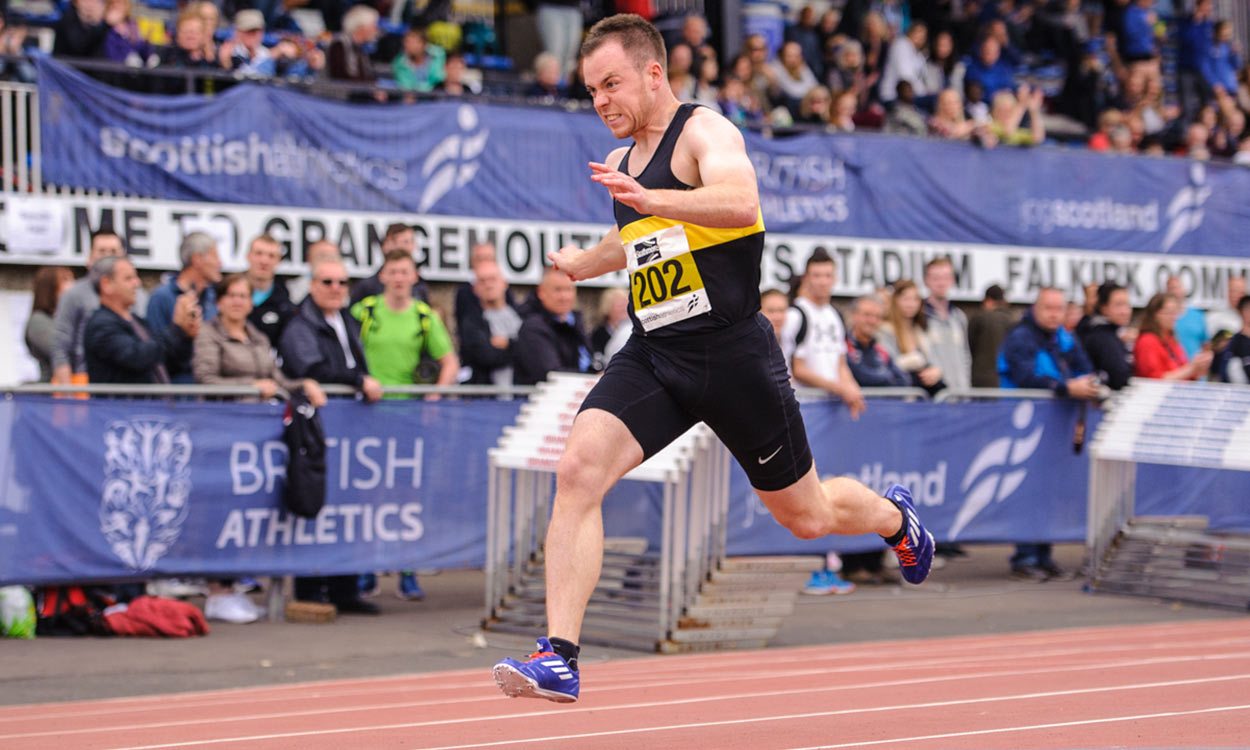 Former medallists, Glasgow 2014 internationals and emergent GB prospects will gather for an historic 125th edition of the Scottish Senior Track and Field Championships at Grangemouth this weekend (August 26-27).

Falkirk Victoria Harriers athlete Grant Plenderleith (pictured) is one of the guests who will carry the Queen’s Baton Relay around the Grangemouth track on Saturday morning prior to the start of the seniors and under-17 champs, which have attracted almost 700 competitors.

Then the 26-year-old will look to put 10 weeks of injury frustration behind him.

“I’m involved in the Baton Relay on Saturday but while that will be a nice moment, this weekend is all about me trying to save something from my season,” said Plenderleith, who won the Scottish 200m title at the same venue last year.

“It started well with some good runs early season, including a 100m windy PB and representing Scotland at the Loughborough International. But I suffered a hamstring tear and was out for 10 weeks in total.

“For the Senior Champs, I’m entered in the 400m and the 200m so there’s a final decision to be made. But, for something like the 125th Scottish Senior Champs, you want to be part of that if you can and it’s on my home track at Grangemouth.

“If I can pull out a good performance on the day then I won’t feel like it is a completely wasted year.”

Discus thrower Law will bid for a remarkable 10th Scottish senior title and her current run of successive wins stands at six-in-a-row. Law captained Scotland at the Manchester International last week where she won the discus event.

Add a handful of visitors from Ireland and England and there should be a number of exciting contests for what it part of the Team Scotland series for summer 2017 ahead of the next Commonwealth Games next April.

With the under-17 champs a big draw for clubs from all over the country, as well as para athletics events featuring the likes of Glasgow 2014 runner Lewis Clow, it will once again be a busy weekend.

“We added the Scottish Under-17 Champs to the Seniors weekend last year and the pilot proved a success,” said Scottish Athletics chief executive Mark Munro.

“It adds to the two days and has the benefit of showing those teenagers what they can aim for in terms of stepping up in the next couple of years, with many of our under-20s competing in the seniors.

“There’s definitely a feel-good factor in our sport at the moment after the European age groups, World Para Champs and the World Champs with 16 Scots involved there. It all comes from hard work at clubs by coaches and volunteers and I hope to see many of them this weekend at Grangemouth.”

Start lists and further information can be found here.