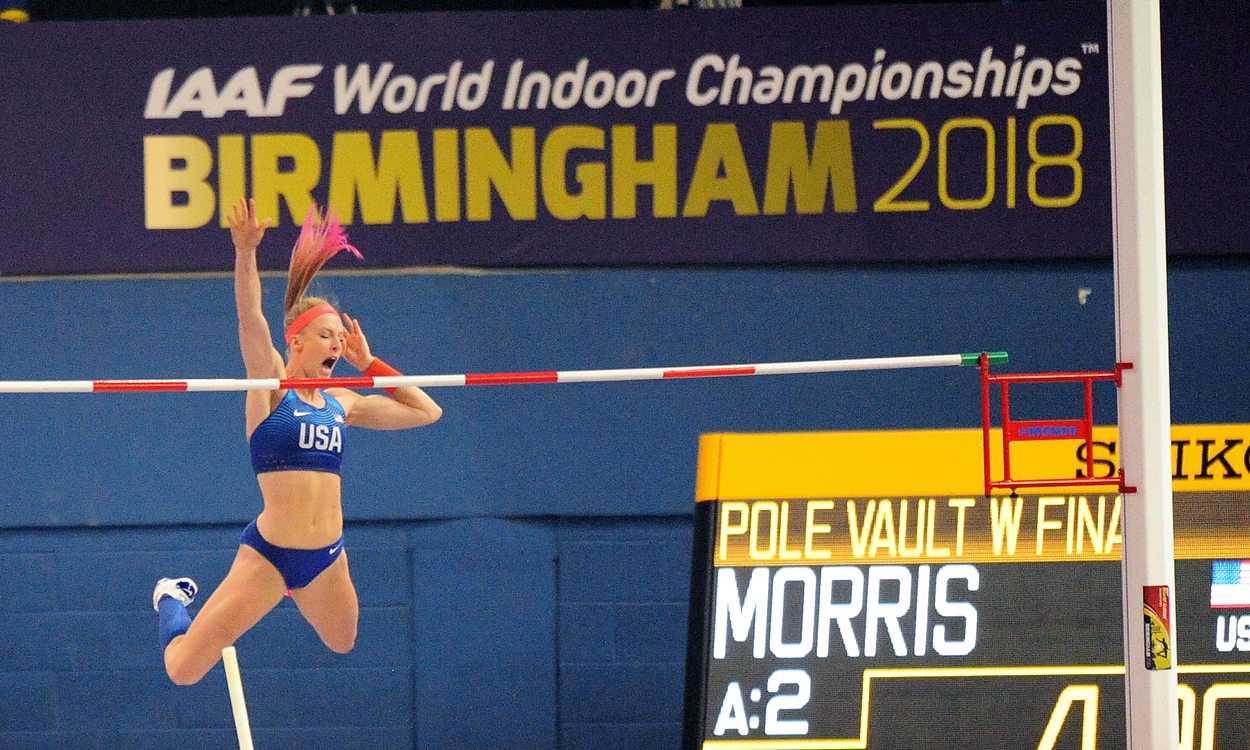 Sandi Morris is no longer “silver Sandi” after the American won a hard-fought battle for her first global pole vault gold at the IAAF World Championships on Saturday evening.

The competition clearly took its toll, with the 25-year-old later sporting ice packs strapped to her body as well as her gold medal, but Morris was even able to find positives in injury.

“It means that I’m lining the jump up perfectly and my pole was just underneath me,” said the championship record-breaker, who came down on her pole twice, hitting her arm and leg. “I guess it’s a good thing I have to worry about it – it means I’m doing some things right!”

So I came down on my pole TWICE in today’s comp… and now have a balloon for an elbow and a gnarly mass of bruise on my thigh. But the battle wounds were worth it 🤣🥇 pic.twitter.com/x5srw8YUJp

It seems she is doing plenty right. Her winning height of 4.95m improved the previous championship best set by her fellow American Jenn Suhr in 2016, which is when Morris claimed her first major medal. That started a silver medal trend which continued with runner-up finishes at the Olympics in Rio and the world championships in London, both times behind Katerina Stefanidi of Greece.

On the hunt for gold in Birmingham to complete the set along with Olympic, world outdoor and European titles claimed indoors and out, Stefanidi – who was unbeaten in 19 finals – this time had to be happy with bronze, while silver was secured by Russia’s Anzhelika Sidorova, competing as a neutral athlete.

“I finally broke my silver streak,” Morris told AW with a smile. “I was silver Sandi there for a while with silver in Rio, a silver at World Indoors in Portland, silver at London last year, so to finally break that streak and be a golden girl – I’m going to soak in this one! I’m so happy.”

“I finally broke my silver streak. I was silver Sandi there for a while!” @sandicheekspv on her World Indoors win and battle wounds. Read more ➡️ https://t.co/b1phhAKW4O #IAAFworlds @usatf pic.twitter.com/wBRPJ6OZWY

Morris had entered the competition – which eventually lasted for the whole of the Saturday night programme, around three and a quarter hours – at 4.50m and she cleared that and 4.60m on her first attempts. She needed two tries at 4.70m, one at 4.75m and then all three at 4.80m.

By this stage only Sidorova, with a flawless performance to that point, and Stefanidi were still in the competition, with New Zealand’s Olympic bronze medallist Eliza McCartney clearing a best of 4.75m for an area indoor record and US champion Katie Nageotte bowing out after her clearance of 4.70m.

Sidorova went on to soar over 4.85m first time, while Morris and Stefanidi decided to pass to 4.90m after one failure each.

Morris achieved it on her second and final go, while Sidorova also needed all her available attempts to clear the bar at PB height, but it proved too much for Stefanidi.

With the bar at 4.95m, Morris was again determined to make it over and did so on her last try to secure success as Sidorova’s three attempts were unsuccessful.

With her gold confirmed, Morris had the bar raised to an indoor world record height of 5.04m but it wasn’t to be.

“It was a battle. It was the hardest I have had to work for a medal,” said the winner. “I got myself pumped up because adrenaline is the best pain killer.”

Stefanidi said: “I had to put so much effort to gain this medal. I was thinking about skipping it (indoors) as I had some pain in my tendon. But the more I jumped the better I felt, maybe it was more a mental thing.

“Now, I am excited I made it on to the podium. I cannot be angry I did not win. I only can be angry that I did not jump higher. But the gold was really too high today.”