Relay heroes roll back the years at Manchester International 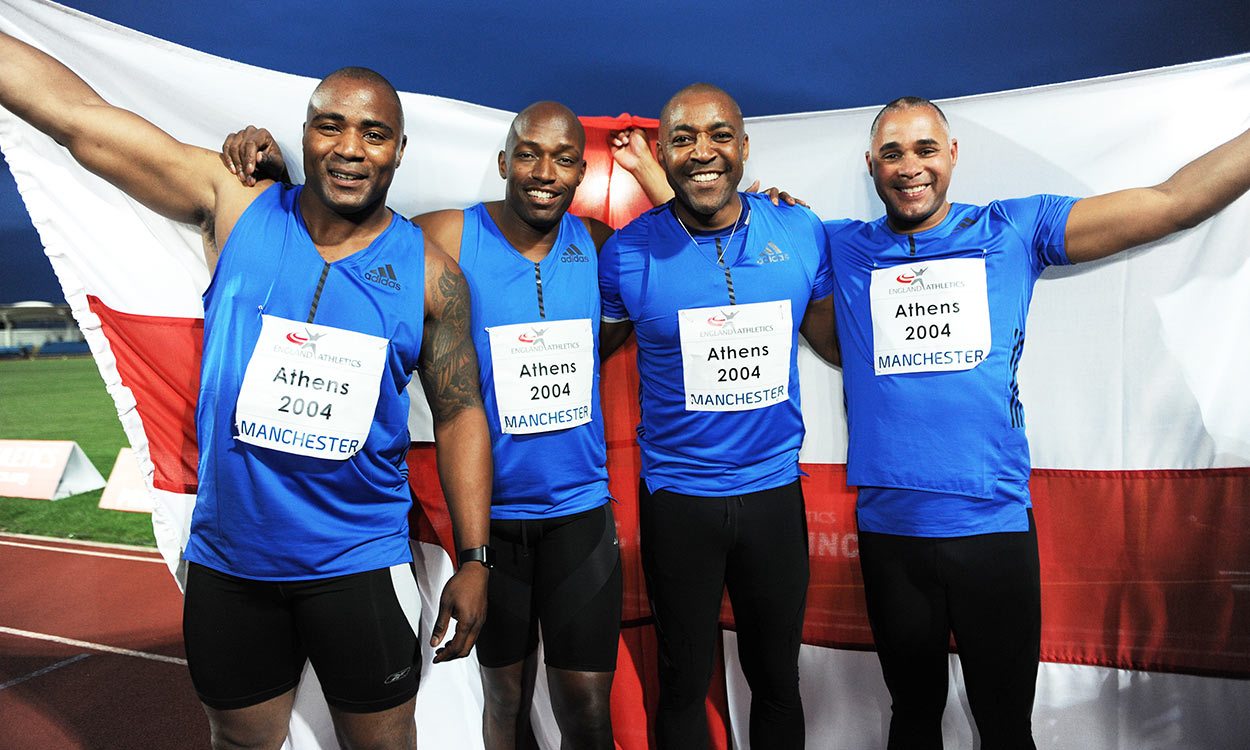 It was as if they had never been away. The Olympic 4x100m relay heroes of 2004 turned back the clock and put on a show during an excellent evening of athletics at the end of which England were crowned winners of the Manchester International meeting.

As in Athens, Jason Gardener got things off to a quick start before handing over to Darren Campbell – this time running against his son rather than Olympians  – before Marlon Devonish flew round the bend and left Mark Lewis-Francis with plenty of room for manoeuvre to cross the line first in the 4x100m golden relay with a time of 43.72.

The showpiece, which was raising money for the We Love Manchester Emergency Fund, came towards the end of a meeting which saw some impressive performances as teams from England, Scotland, Northern Ireland, Wales, Denmark, GB Juniors, an international select and the BAL did battle.

Few were more impressive than Joel Leon Benitez, who cleared 5.50m in the pole vault competition for GB Juniors after a fine battle with Jax Thoirs of Scotland. That in itself smashed the previous meeting best of 5.25m but Benitez had loftier aims in mind. He attempted, and came very close to clearing, what would have been a British junior record of 5.60m.

“I’m a little bit frustrated this has come after the world championships, especially after the foul jump I had at the trials, but I’m on my way back and I’m finding my rhythm,” said the double Olympian, who will look cement his place with another big jump before the season is out.

Elsewhere in the field, Scotland’s Kirsty Law set new Manchester International standards with 52.79m in the discus, as did Dan Bramble – competing for the International Select – with 7.95m in the long jump, not far off his season’s best.

Back on the track, the showings of a couple of young Scots stood out. Alisha Rees, with 23.32, made the most of a lull in the windy conditions to smash her 200m personal best and the meeting record as she took the points for GB Juniors. Rees’ team-mate Jemma Reekie, European under-20 champion, was dominant in the mile as she clocked 4:40.55.

In the 100m races, England’s Andy Robertson and Diani Walker took the men’s and women’s victories in 10.15 and 11.44, but with the caveat of an illegal windspeed.

In the women’s 800m, there was a particularly tight finish as Khahisa Mhlanga, competing for GB Juniors, pipped England’s Hannah England to victory on the line in 2:11.70, while Margaret Adeoye took the 400m for England in 52.70.

All evening long, however, the crowd at the Manchester Regional Arena had been looking forward to seeing how the former Olympic champions would fare when they raced together for the first time since that fateful August night 13 years ago.

Gardener, who admitted to deliberately false starting back then – in the days before it meant instant disqualification – was given a mock warning by the starter on this occasion too.

However, when the action did get underway the now president of UK Athletics showed he still possesses a tremendous turn of pace.

It was not difficult in identifying the former international athletes who were up against teams including the likes of boxer Anthony Crolla but, after he crossed the finish line, Lewis-Francis admitted: “That was hard work. I didn’t think we’d ever run together again. It all felt very natural and I was getting flashbacks to 2004. It was amazing, I’m really glad I did it.”

To donate to the We Love Manchester Emergency Fund visit: www.justgiving.com/fundraising/goldenrelay.

For full results of the Manchester International visit: results.welshathletics.org.

» See the August 24 edition of AW magazine for further coverage