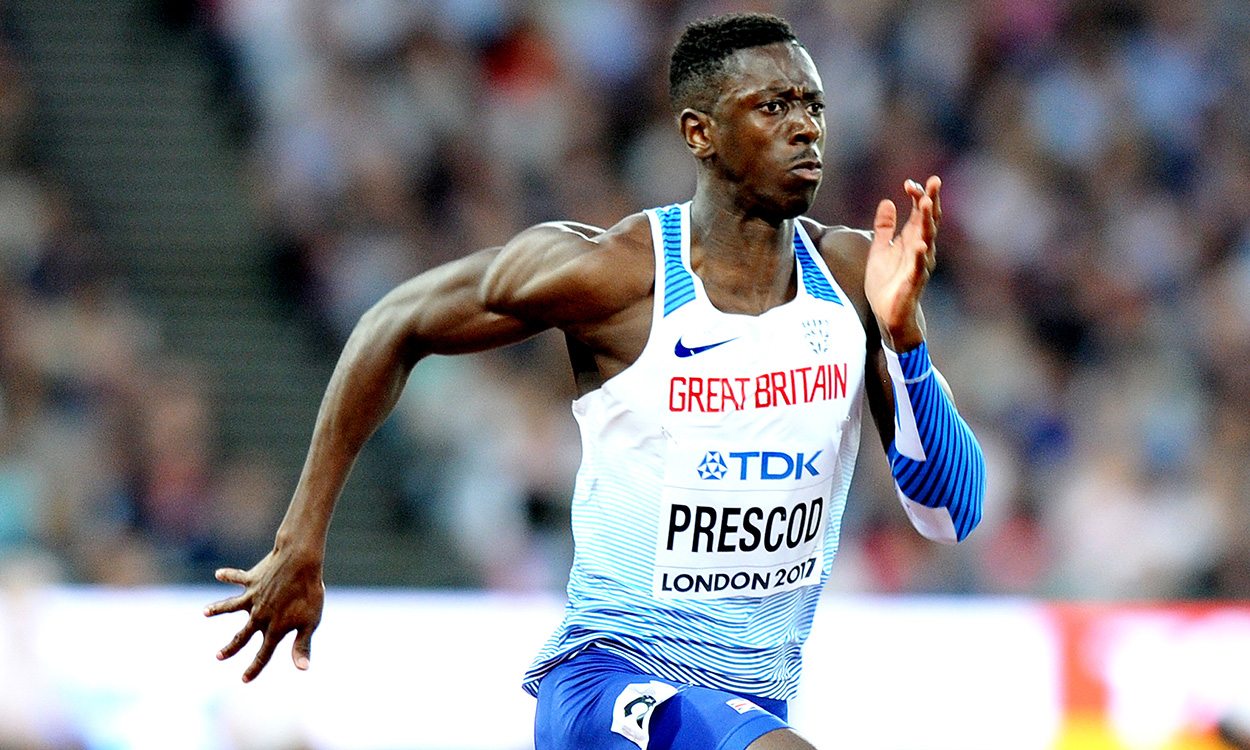 British sprinter among athletes to impress on wet evening, while Gong Lijiao and Lyu Huihui secure success on home soil

Running in the outside lane and into a -0.5m/s headwind, the 22-year-old impressed with a strong finish to dip ahead of world indoor silver medallist Su, coming out on top in a field which also included his fellow Brit CJ Ujah, Turkey’s world 200m champion Ramil Guliyev, USA’s world 100m champion Justin Gatlin and Canada’s double Olympic medallist Andre De Grasse.

Prescod’s winning time was just 0.01 off the PB he set when racing at the IAAF World Championships in London last summer.

“When I saw the rain tonight I thought, ‘yes’,” said the British champion. “I train in these conditions all the time in the East Midlands (of England). It suits me.

“My expectation going in was I knew I had it in me (to win) as long as I executed my race. It is definitely the happiest moment in my time on the Diamond League circuit.”

There had been another powerful performance in the sprints by Olympic 400m champion Shaunae Miller-Uibo of Bahamas as she won the 200m in 22.06 to break the meeting record ahead of world 200m champion Dafne Schippers of Netherlands with a time of 22.34.

That was one of five meeting records broken, while there were also eight world leads set at the Shanghai stadium.

South Africa’s Luvo Manyonga saved his best leap until last and won the long jump with his mark of 8.56m. China’s 19-year-old Shi Yuhao had taken the lead with a PB of 8.43m in the second round, a mark which Manyonga had matched in the fourth round to sit ahead on countback. But Shi was unable to improve further and was left in agony after injuring himself during his final attempt.

Home fans did have victories to cheer in the women’s shot put and javelin as world champion Gong Lijiao was a dominant winner in the shot, throwing a world-leading 19.99m. Jamaica’s Commonwealth champion Danniel Thomas-Dodd was her closest rival with a best of 18.70m. Javelin victory was claimed by Lyu Huihui after her third round meeting record throw of 66.85m.

Olympic champion Brianna McNeal led a US top four as she broke the 100m hurdles meeting record with a time of 12.50 from Sharika Nelvis’ 12.52. Jamaica’s world and Olympic champion Omar McLeod won in his first 110m hurdles race of the year, clocking 13.16 to equal the world lead and finish ahead of Spain’s Orlando Ortega with 13.17.

There was a dramatic finish in the women’s 3000m steeplechase as Norah Jeruto slipped after the final barrier and Beatrice Chepkoech was left untroubled to claim the win in a world-leading 9:07.27 as Kenyan athletes filled the top six places.

In the men’s 800m Kenya’s Wycliffe Kinyamal broke the meeting record with a PB of 1:43.91 for victory, just ahead of Jonathan Kitilit with 1:43.95. Britain’s Andrew Osagie was seventh in 1:46.36. There was 1500m success for Kenya’s Timothy Cheruiyot as he moved past Ethiopia’s Samuel Tefera in the final stages to clock a world-leading 3:31.48.

World silver medallist Steven Gardiner of Bahamas claimed another win as he broke the 400m meeting record with 43.99 ahead of Botswana’s Isaac Makwala with 44.23, while USA’s Olympic and world triple jump champion Christian Taylor was fifth in 45.24.

Colombia’s Olympic triple jump champion Caterine Ibargüen twice improved the world lead, first with 14.66m in the third round and then with 14.80m to seal victory with her last leap.

Russia’s Maria Lasitskene cleared a world-leading 1.97m to win the high jump, while France’s Renaud Lavillenie won the pole vault on countback ahead of Poland’s Piotr Lisek, as both athletes cleared 5.81m.

» Results can be found here, while the May 17 edition of AW will include coverage of events in Shanghai