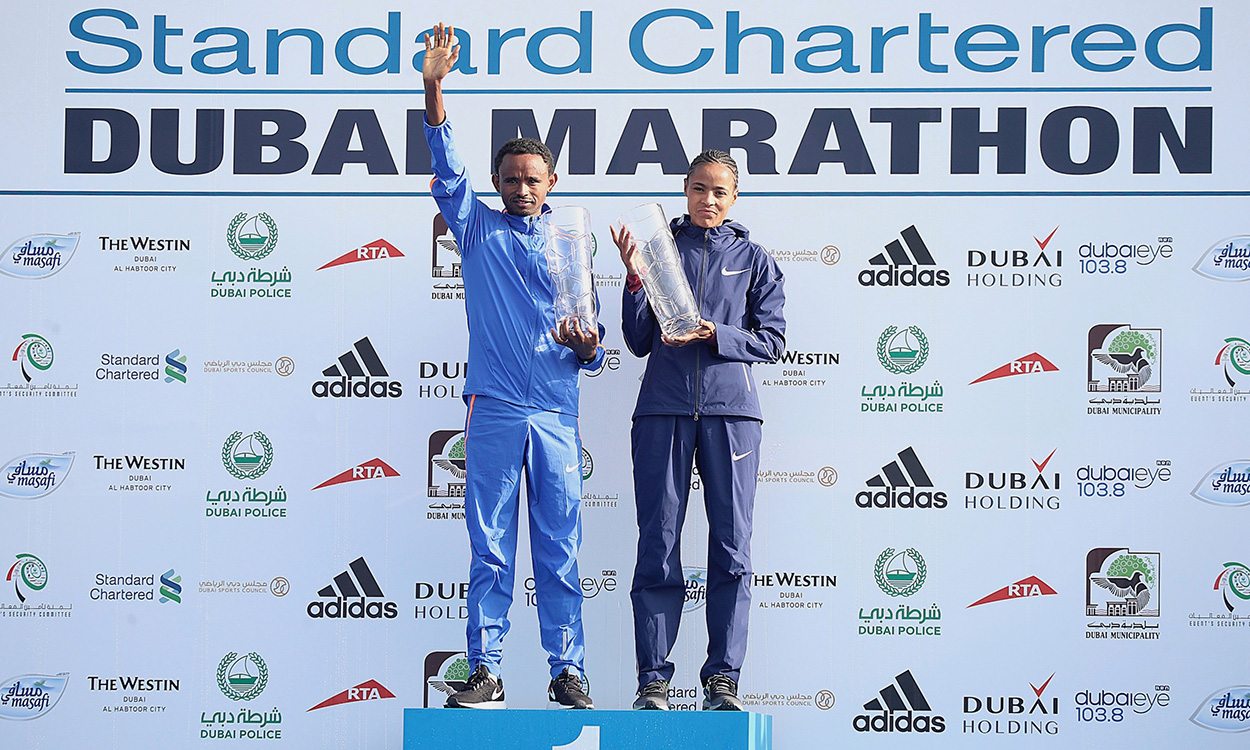 There was an Ethiopian double at the Standard Chartered Dubai Marathon on Friday, with Mosinet Geremew and Roza Dereje both breaking course records at an event which featured incredible depth.

Debutant Leul Gebresilase was second with 2:04:02, while defending champion Tamirat Tola clocked 2:04:06 for third as the top 10 places were claimed by Ethiopian athletes.

In almost perfect weather conditions, the leading group ran a consistent pace and, after a half-marathon split time of 61:36, the world record of 2:02:57 was still in reach at 30km, which was passed in 87:35.

After the last pacemaker dropped out, the pace fell and the athletes focused on winning the US$200,000 first prize.

Five runners were still in contention when the group entered the home straight but, in the end, it was the runner who entered the Standard Chartered Dubai Marathon last – Geremew only signed up just days before – who came first.

“I was happy to run at the pacemaker’s pace for the opening half,” said Geremew. “It was a good race with strong competition over a good course.

“When did I think I could win? I only thought about winning when I had one kilometre to go.”

In the women’s race, Dereje clocked 2:19:17 and with that became the seventh-fastest woman in marathon history.

Her fellow Ethiopian Feyse Tadese was second in 2:19:30, while Yebrgual Melese was third in 2:19:36 and defending champion Worknesh Degefa fourth in 2:19:53 as four women clocked sub-2:20 times in one race for the first ever time.

While Ethiopia dominated the marathon, in the wheelchair races it was a Swiss double with Marcel Hug winning the men’s title in 1:25:14 and Sandra Graf winning the women’s in 1:45:13.

A record field of more than 30,000 runners entered the Dubai events, which also included races at 10km and 4km.