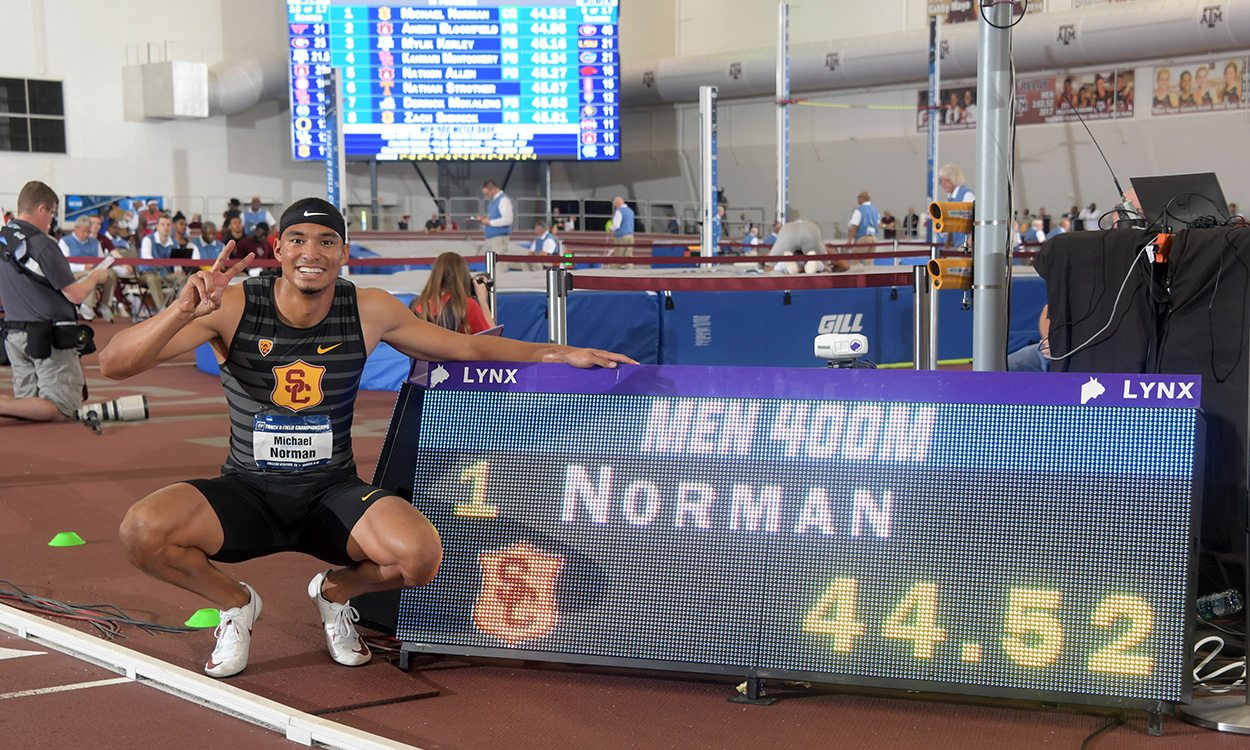 There was an incredible series of performances on the second day of the NCAA Indoor Championships at College Station, Texas, on Saturday.

World under-20 200m champion Michael Norman stormed to victory in the 400m, clocking 44.52 in only his third ever race indoors over the distance to improve the previous record set by Kerron Clement in 2005 by 0.05.

The University of Southern California student-athlete had run a 200m split of 21.33 and eventually claimed the title ahead of Akeem Bloomfield who had set a Jamaican indoor record of 44.86 in the first race of the two-heat final.

In the men’s 4x400m, the top three teams all dipped inside the recent world indoor record mark set by Poland at the IAAF World Indoor Championships in Birmingham (3:01.77), led by a University of Southern California team anchored by Norman.

Zach Shinnick, Rai Benjamin and Ricky Morgan Jr. joined Norman in that winning team and their time will be a world best, as Benjamin is from Antigua & Barbuda, while his team-mates are USA athletes. Therefore, the world record would be held by the Texas A&M team, with the mark – like Norman’s 400m – now pending ratification.

Kendall Ellis won the women’s 400m in a North American indoor record of 50.34, before Sydney McLaughlin won the second heat of the two-race final in a world under-20 record of 50.36.

DOWN GOES ANOTHER #ncaaTF RECORD! @HarvardTrack_XC's Gabrielle Thomas sets a new COLLEGIATE RECORD in the Women's 200m with 2️⃣2️⃣.3️⃣8️⃣edging out Bianca Knight's 2008 time of 22.40. pic.twitter.com/CVtVvp95ib

Tim Duckworth became the first British athlete to win an NCAA combined events title, either indoors or outdoors, as he won the heptathlon with a total of 6188 points to improve his own national record.

His fellow Brit Josh Kerr of the University of New Mexico retained his mile title, clocking 3:57.02.

Grant Holloway contributed to that Florida team win as he won the 60m hurdles on Saturday in 7.47 and the day before leapt 8.13m for second place in the long jump behind Will Williams with 8.19m. Holloway also ran a leg of 44.91 in the 4x400m.

Among Georgia’s winners was Keturah Orji as she set a championship record of 14.27m to win the triple jump and also finished second in the long jump with 6.52m behind her team-mate Kate Hall with 6.73m and ahead of Tara Davis, also a University of Georgia athlete, with 6.50m.

On Friday, Davis also broke the world under-20 indoor 60m hurdles record with 7.98 to win her heat.