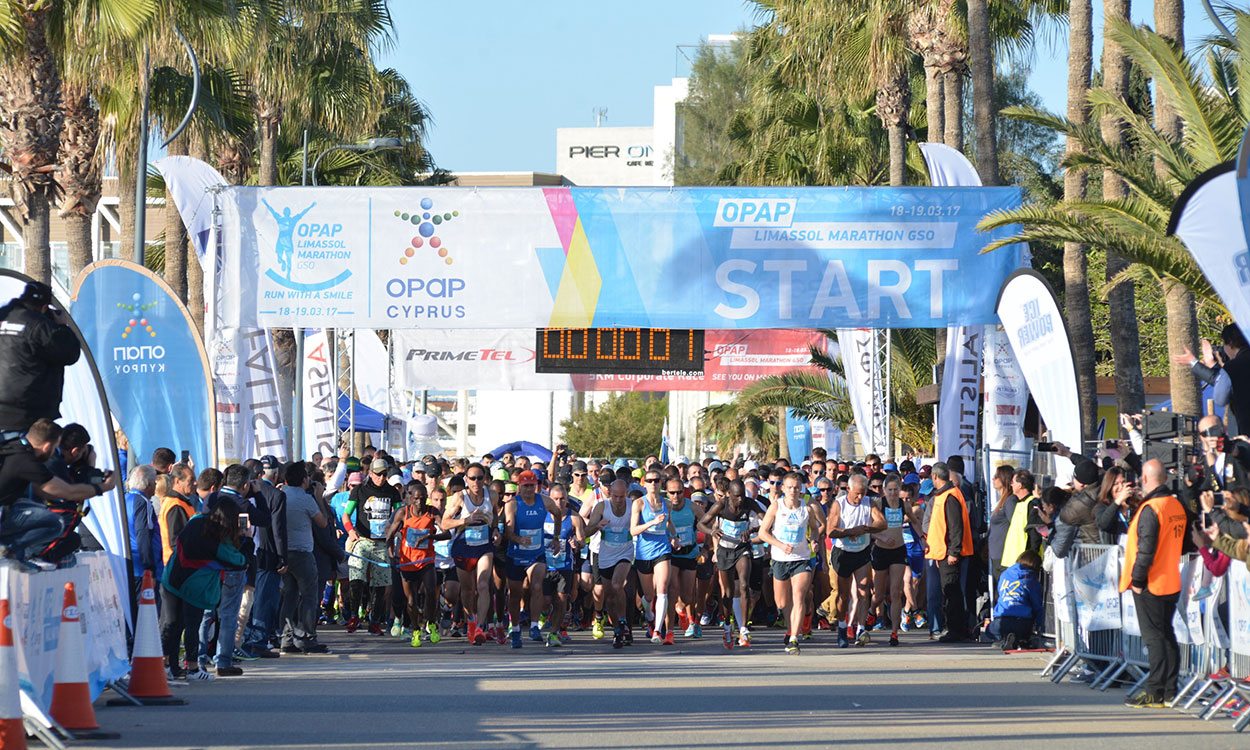 A record number of 15,000 runners took part in the OPAP Limassol Marathon GSO weekend of events on March 18-19.

Held over two days for the first time, the event offered distances from a 1km youth run through to the 26.2-mile OPAP Limassol Marathon GSO.

It was a Kenyan double in the longest event on the programme as Edwin Kiprop Kiyeng won the men’s marathon in 2:15:04 from fellow Kenyan Wycliffe Kip Biwot with 2:15:40. It would be 23 minutes until another runner followed them over the finish line and Pavel Borodin of Cyprus was third in 2:38:42.

GB international Joasia Zakrzewski, who was recently named in the Great Britain team for the IAU World Trail Championships in Italy on June 10, was fourth, clocking 2:47:23 for 11th overall and her 15th sub-2:50 marathon.

The half-marathon saw both course records smashed, with Joel Maina Mwangi from Kenya shaving a minute and a half off the previous best mark with his time of 62:52. Again it was a Kenyan double, as Stellah Jep Barsosio dominated the women’s field to take three minutes off the course record with 69:31.

The Petrolina 10K Energy Race was won by Javier Mavelli from Cyprus (36:23) and Olga Andejeva from Estonia (37:23), while 5K City Race titles were claimed by Marios Apostolides (16:55) and Elpida Christodoulidou (20:03), both from Cyprus.

Among other British runners in action, Bashir Hussain made the podium after his third-place finish in the Petrolina 10K Energy Race with a time of 37:23, while Jackie Newton was fifth in the half-marathon after crossing the finish line in 1:33:48. Both Newton and Hussain also claimed the top spots in their age categories.

“We are delighted with the success of the 2017 OPAP Limassol Marathon GSO and would like to congratulate every competitor who crossed the finish line at each of our six races,” said race director Andreas Spyrou. “It was a phenomenal weekend of sporting achievement for runners of all ages and abilities, from our youth runners to our elite athletes, and it was wonderful to welcome participants of all different nationalities for this weekend celebration of running.

“Congratulations must go to the winners of each race, all of whom had trained hard to achieve their targets in Limassol. We were also delighted to see so many supporters turn out to cheer on the runners, including family and friends who had travelled from afar to soak up the brilliant atmosphere. As race destinations go, Limassol is really up there with the best of them, as it offers a flat and straight course, magnificent coastal scenery, plentiful history and culture, a pleasant climate and delicious Mediterranean cuisine for all to enjoy.

“A big thank you to our title sponsor OPAP and all our other sponsors and supporters for helping us to host a truly memorable race weekend.”

» Full results can be found at www.limassolmarathon.com