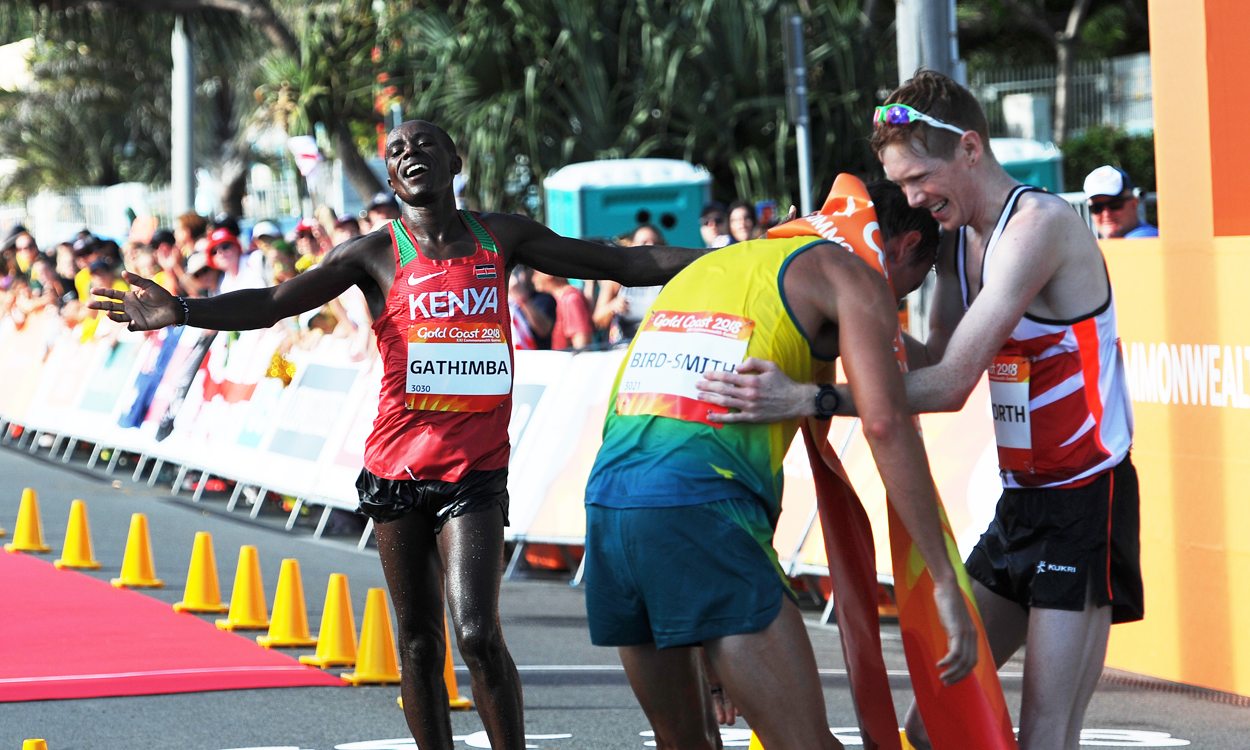 Dane Bird-Smith and Tom Bosworth ensured that athletics action at the Gold Coast Commonwealth Games had a thrilling start as they battled for the 20km race walk title on Currumbin Beachfront on Sunday morning.

Roared to victory by a home crowd, Australia’s Olympic bronze medallist Bird-Smith broke the Games record to secure gold, clocking 79:34 to finish four seconds ahead of England’s Bosworth, who smashed his British record for silver.

A further 13 seconds back, Samuel Gathimba claimed bronze for Kenya.

The race was about redemption for Bosworth. Left devastated after his disqualification at the IAAF World Championships in London last summer, the Rio Olympics sixth-placer was determined to bounce back in Australia and he did so in superb style.

After putting in a surge half way into the race, which was passed in 39:57, Bosworth was happy to let Bird-Smith and Gathimba move to the fore. The Brit closed the gap and with 6km to go the race was on Games record pace.

Friends off the track and road but rivals in competition, neither Bosworth nor Bird-Smith was willing to give in and the gold medal battle went all the way down to the closing stages, as the Australian used the home support to help him move away over the final 600m.

“I’m so pleased with this medal and to be up there with Dane,” said Bosworth. “He’s a really good mate so I am really pleased for him.

“The noise was insane; the race was brilliant fun so it must have been a great moment for him. It certainly was for me.”

The emotion was clear to see in Bosworth’s face at the finish and as he congratulated Bird-Smith.

“Today was redemption for me. I wanted to walk technically well, be strong, be competitive. I knew if I could do that I’d end up on the podium and I’m glad that’s happened,” he said.

“I’m co-captain of the England team which is a real honour for me so I’m really pleased to have gone out there and led from the front. I’ve got a week of enjoying athletics, cheering people on and hopefully being a good captain!”

Delighted with his victory, Bird-Smith said: “I could not be happier.

“The last 500m hurt so much but I had everyone behind me which made it so special. It was unbelievable, an unreal feeling. I am over the moon and I cannot thank (the crowd) enough. As I came around the bend they went absolutely ballistic.”

Aged just 21, Bosworth’s England team-mate Callum Wilkinson impressed with a time of 82:35 for seventh, one place ahead of Canada’s Evan Dunfee.