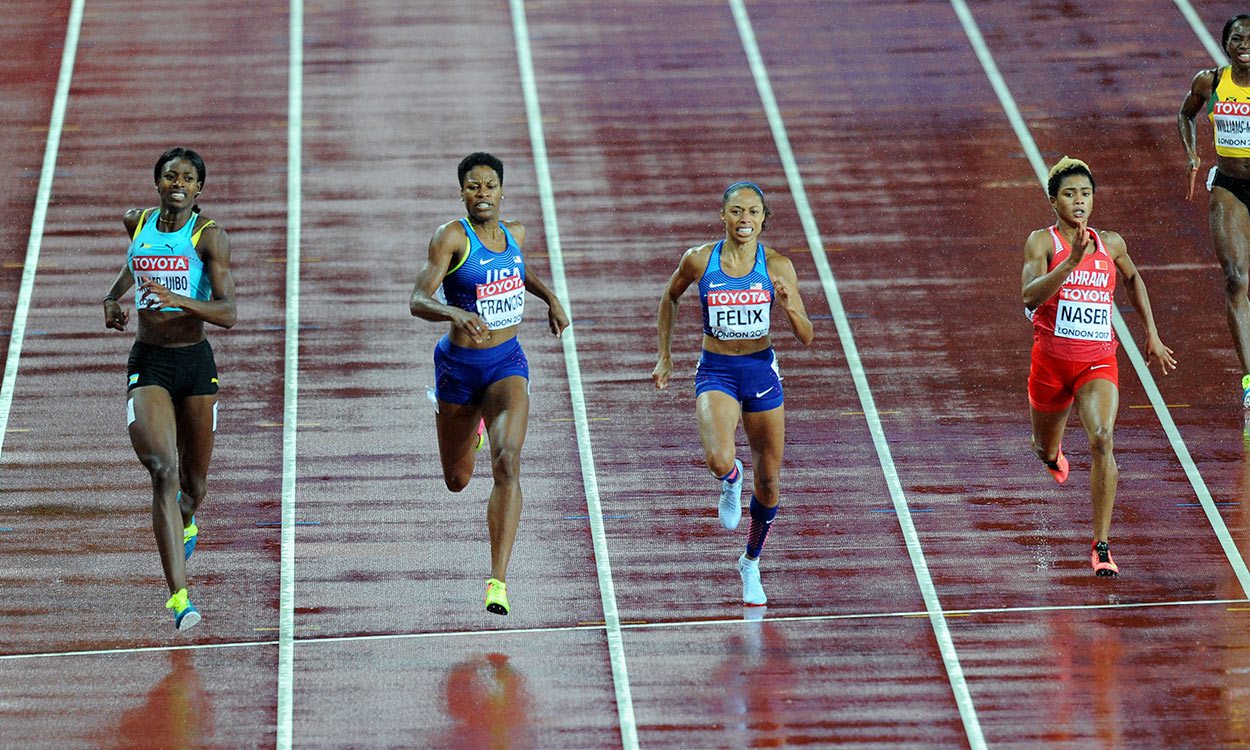 USA’s Phyllis Francis was a surprise winner of the IAAF World Championships 400m title in dramatic circumstances at the London Stadium.

With around 50 metres to go, it looked an odds-on certainty that Shaunae Miller-Uibo of the Bahamas was going to storm her way to gold, given the seemingly unassailable lead she held as the finishing line beckoned.

But, almost inexplicably, the 23-year-old Olympic champion completely tied up, appearing to stub her foot into the track with 20 metres to go. The stumble meant she lost all momentum and it was Francis, finishing strongly, who came through to spring a surprise and win in a personal best of 49.92 ahead of teenager Salwa Eid Naser, who set a Bahraini national record – her third of the championships – in 50.06 and defending champion Allyson Felix (50.08).

The race for gold had been expected to come down to Felix and Miller-Uibo and it was the highly decorated American, who equalled Merlene Ottey and Usain Bolt’s tally of 14 world championships medals, who looked to be holding a marginal advantage approaching halfway.

However, Miller-Uibo flew round the bend and, with Felix apparently starting to pay a heavy price for her early efforts, moved convincingly ahead into the finishing straight.

It may have looked as if the 400m story was already written, but there was to be an incredible twist in the tale as Miller-Uibo began to strain slightly. A few strides later her footing was lost and, with it, hopes of adding to the Olympic title which she famously dived across the line to beat Felix to in Rio.

What on earth had happened? Miller-Uibo looked bemused as well as dejected after finishing fourth in a time of 50:49. None of the medallists could shed any light on the mystery, either.

“Allyson and Shaunae are amazing finishers,” said Francis, a 4x400m relay gold medallist in Rio. “When I went down the home straight I just believed in myself and stayed patient. I just knew what I was capable of doing, so I stuck to my race model. At the finish line I was surprised, I thought I was second or third, but then they told me ‘you are first’. That is crazy.”

She added: “It is amazing. I am so excited. It is such an amazing feeling. Being world champion sounds pretty cool. This win has not hit me yet, but I guess tomorrow when I will wake up.”

For Felix, there were clearly mixed feelings on her historic evening.

“I cannot lie, I am disappointed to lose one gold tonight but the championships is not over yet so we keep going,” said the 31-year-old taking part in her seventh world championships.  “This was the race that mattered to me, the individual race, that is what it is about. So to come up short tonight is never fun. But I am happy for my team-mate. At this level, you cannot underestimate anyone.

“I’m really proud of what I’ve done over the past 14 years and, as long as I’m enjoying it, I’ll just continue on.

“I still feel it is not over yet. I still did not give everything so I am excited to keep going until 2020.”

While Felix is looking towards the end of her career, it would appear that a great one may also lie in store for Eid Naser. The 19-year-old has performed remarkably in her first world championships and said: “I think I surprised my opponents and I even surprised myself. Coming to these championships I really did not think about a medal. After all the hard training I have been through, I just hoped to do something big. I was not really nervous before the race, just the same anybody is before the start.

“I was not chasing Felix, I was pushing myself till the very end and I did not even see what was going on in the last metres. Felix is my role model.”