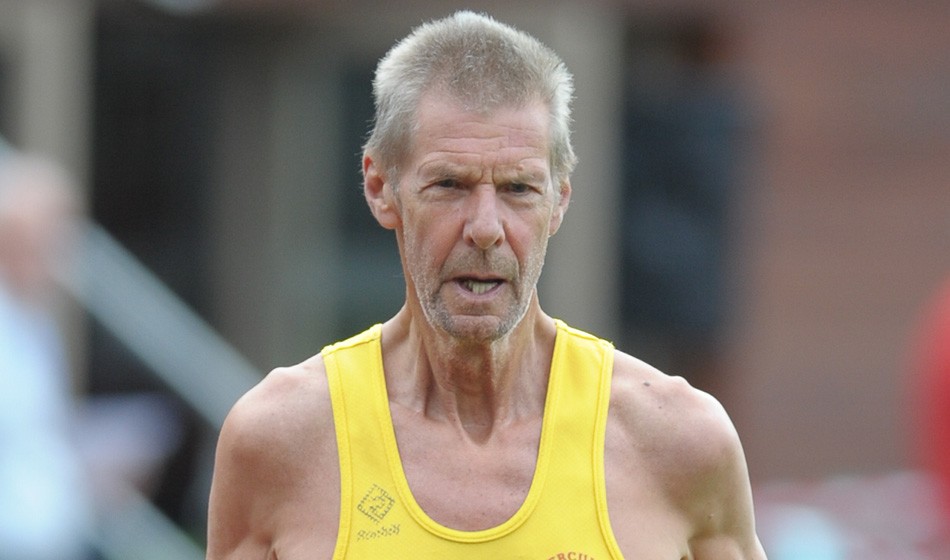 After setting a 400m world record on day one, Kathleen Stewart maintained her record-breaking form as the W80 first broke her own 200m mark of 40.90 by a huge margin in the morning with a time of 39.13.

Then in the afternoon the North Shields Poly athlete rewrote the 800m mark in the W60 plus race. Chasing Anne Martin’s 4:07.36, she took over 10 seconds off the previous record mark with 3:57.33.

Kathleen Stewart (red vest) wins the W80 800m in the British Masters Indoor Champs in a British record 3:57.33 having earlier set a 200m record in 39.13 and a world 400m record on Saturday pic.twitter.com/qDoHbT7o7H

The race was won easily by W60 Karen Brooks in 2:39.48 from one of the greatest British women masters of all-time, W70 Pat Gallagher who passed Stewart on the last lap.

Another to maintain his record-breaking was M75 Peter Giles.

The bass guitarist had set a British 1500m mark the day before and he warmed up for the 3000m by first winning the 800m with the bare minimum of effort in 3:15.12, taking the title by only half a second.

He managed a 4 minute per kilometre pace for most of the 15 laps and finished with a 12:07.38 to add the indoor record to his outdoor record.

Peter Giles sets his second British M75 record of the BMAF Indoor Championship in the 3000m in 12:07.08 having set a 1500m record Saturday and also won the 800m earlier in the afternoon pic.twitter.com/pM13TMyAXn

The quality of Giles’ mark was emphasised by the fact he also easily beat all the younger M70 age group too which Mike Mann won after John Exley, who had beaten him in the 800m and 1500m, faded in the last few laps.

Giles’ run came in the M65 and over race and the race was won by Nigel Gates by well over a minute.

He looked on target for that latter mark until halfway but the complete lack of opposition and the constant lapping took its toll and he won in a still fast 10:26.83.

There was also a lot of lapping in the women’s 3000m where to save time all age groups were combined in the final race of the championships.

Louise Rudd, who set a W45 mile record earlier in the winter, led the first kilometre before W55 world champion Clare Elms took over the pace. Elms had earlier in the afternoon received her British masters athlete of the year award and had set a world record last year but here was content to just to win her age group.

Rudd overtook her as they approached the final lap and won in 10:28.01 with Elms’ 10:30.05 winning her age-group gold in setting the fastest W55 time in the world this year and yielding one of the highest age-gradings of the weekend (101.06%).

Louise Rudd wins the BMAF Indoor W45 and overall women’s 3000m in 10:28.01 ahead of W55 winner Clare Elms with the pair a minute ahead of the rest pic.twitter.com/xmE2jwd44D

All the walkers were in one event and controversially all the W35-W55 800m runners combined in another bid to reduce the timetable.

There Fiona de Mauny followed up her 400m win of the day before with a well paced W35 win in a championship record 2:11.88.

The equivalent men’s race was nowhere near the same quality but a much closer race as Paul Howard just edged Richard Clayton on the line with both timed at 2:06.66.

One of Britain’s greatest ever masters 800m runners, Dave Wilcock, won the M65 title and after winning the 400m and 1500m on day one, there were hopes for a British record. However, with no one within 10 seconds of him, he just missed Pete Molloy’s record of 2:24.48 by less than half a second with his 2:24.93.

The 200m races, not helped by a far from flat track, saw a few surprises with Pat Logan shocking European master sprinter of the year Donald Brown as he ran 25.41 to Brown’s 25.46 after the latter had won the 60m and 60m hurdles the day before.

New W70 Sally Hine was the most successful athlete of the championships. She won seven golds taking titles in the 60m, 200m, 60m hurdles, the high, long and triple jumps and the shot.

The outdoor throws were not helped by heavy rain for some of the afternoon but in earlier better conditions Geoff Tyler set a British M70 record of 43.56m in the discus.

Mark Johnson won the overall pole vault with a 4.30m leap and the M55 had some good attempts at a world record 4.53m.

M55 Mark Johnson wins the Overall men’s pole vault in the BMAF indoor Champs with a 4.30m leap and goes very close to a world record 4.53m with his second attempt pic.twitter.com/0p3J7T4JqL

Additional records were announced after the meeting finished.

Sally Hine and Jean Fail shared the British record of 12.19 in the 60m hurdles with Hine taking the gold medal.

» Full reports in next week’s AW magazine. Click here for an online day one round-up