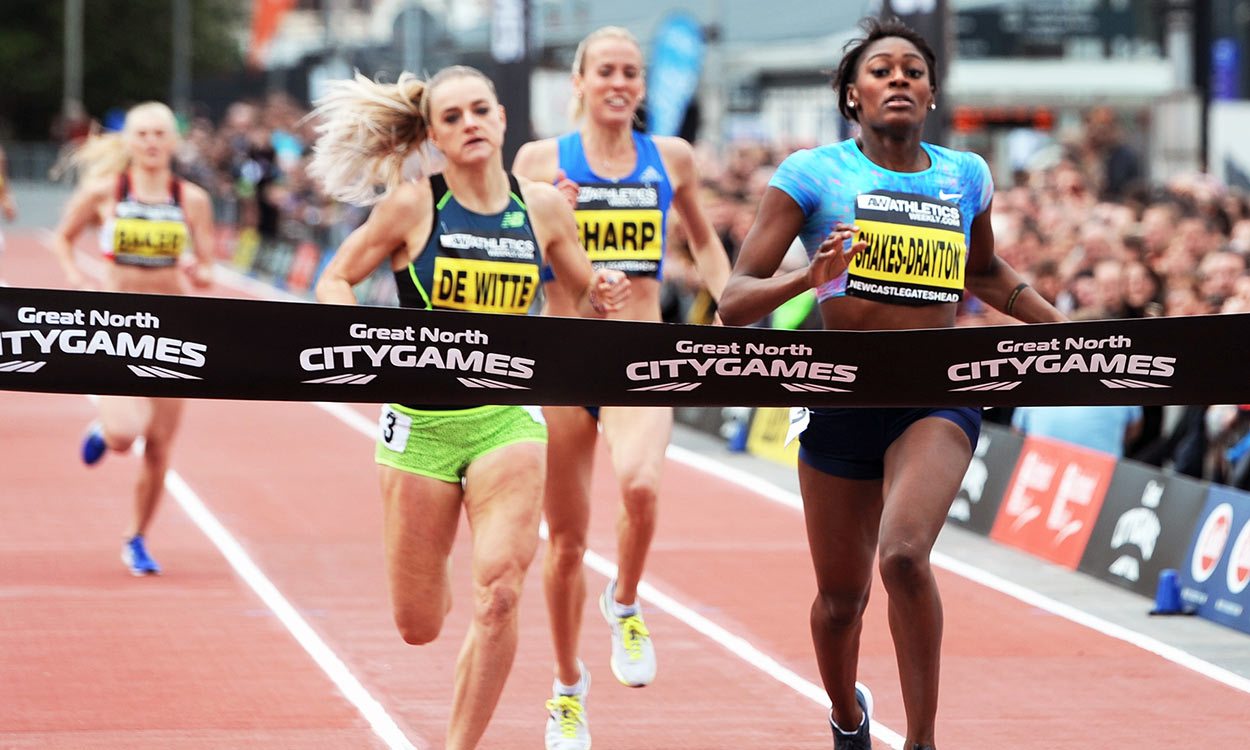 Former 400m hurdler impresses over 500m, while Dina Asher-Smith and Lorraine Ugen are also among the winners on Gateshead Quayside

Perri Shakes-Drayton has had her fair share of battles over the past few years but her latest ended in a thrilling victory as the sprinter stormed to 500m success at the Great North CityGames on Saturday.

Just one hundredth of a second was in it as the former 400m hurdler pipped her fellow Briton Anyika Onuora on the line, 66.69 to 66.70, with Dutch sprinter Lisanne de Witte third in 67.19.

“It means a lot to me,” said Shakes-Drayton, who has experienced injury problems since the 2013 IAAF World Championships in Moscow where she sustained a posterior cruciate ligament tear and cartilage damage to her knee. “I don’t think I was a favourite but the strength that I have came through.

“I’ve never done this event before and I’ve been out for so many years so I’m glad I got the opportunity to run today and I got the win.

“I’m in a good place,” added the 28-year-old, who formed part of GB’s world silver medal-winning 4x400m squad at the World Championships in London last month. “After what I’ve been through in terms of injury and stuff, I’m grateful even to get a lane in a meet.”

What a season it has been for @shakesdrayton and she's ended it with a win after a thrilling 500m! #GNCG2017 pic.twitter.com/6kco9YkAA5

While the finish saw a fight between 400m specialists, it was 800m runner Lynsey Sharp who had pushed the pace in the early stages. The race started on the road on the Gateshead Quayside, but as athletes reached the pop-up track with 150m to go, Shakes-Drayton, Onuora and De Witte began to move past.

Onuora had a powerful burst but tiring towards the end she was caught and had to settle for second. Sharp finished fourth in 67.48.

Two more world relay silver medallists were also in winning form at the street athletics meet on the banks of the River Tyne, with members of GB’s 4x100m team in London – Dina Asher-Smith and Desiree Henry – victorious in the 150m and 100m respectively.

British 100m and 200m record-holder Asher-Smith is another to have worked her way back after injury, with the 21-year-old having broken her foot in February, and she was on the hunt for a PB. Clocking 16.70 she achieved it, improving on her mark of 16.82 run in Manchester in 2015. Bianca Williams was second in 17.00.

“I’m happy to have put together a good performance for the crowd up here and I’m very, very happy to now be on my break!” said Asher-Smith. “It’s been a long season.”

Over on the other side of the river, the long jump win was decided on countback as not two but three athletes all shared the top mark.

“It was nice to end the season with a fun competition outdoors with close crowds,” said Ugen. “It was super close but it made it fun and a bit more exciting.”

A report on men’s events action can be found here.

» Full results can be found here, while next week’s AW magazine will include further reports, pictures and results