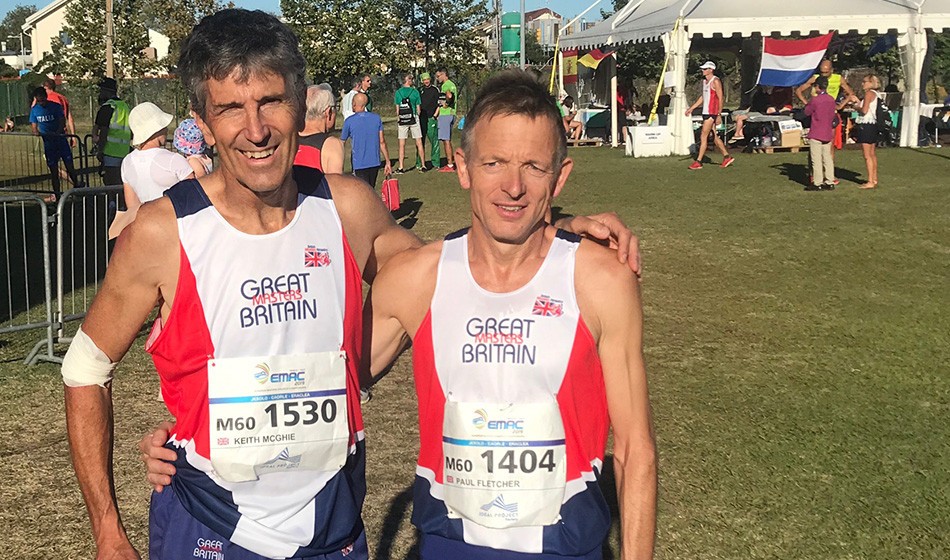 Britain had another good day at the European Masters Championships in Italy, winning 10 gold medals with six coming at 800m, three at 5000m and one at the pole vault.

The men had yet another great patch in the 800m, winning three races in a row with Paul Fletcher’s M60 win probably the highlight as he won his third gold on the track after the 1500m and 10,000m, never having previously won a major title.

First to strike though was Clare Elms in the 5000m at Eraklea, as she won her fifth gold medal and was the only British winner in the morning.

In very hot conditions and with an 800m to run later in the day, she tried to ease around behind Sweden’s 10,000m runner-up Karin Schon until the penultimate lap. Her gentle acceleration saw her win by 17 seconds from the Swede though the time of 19:00.30 was much faster than she was expecting to have to run.

Attention then turned back to the main stadium at Jesolo for the 800m where, for the only time at the championships, the women were allowed track races with the men.

The first to strike gold was W70 world record-holder and defending champion Angela Copson who unusually, being such a multi medallist, was having her first run of the championships.

World record-holder and defending champion Angela Copson makes a belated first appearance in European Masters and sprints to victory in the W70 800m in 3:03.22. 1500m champion Ros Tabor is third in 3:06.11 and XC champion Penny Forse is fourth. @emacvenice2019 pic.twitter.com/WDlMIrFU52

The Dane, who won the W45 title 21 years ago, still led into the straight but both Tabor and Copson kicked up to her shoulder.

Though claiming she had focussed on training for longer races, Copson had the best finish and won comfortably in 3:03.22 with Tabor winning her fifth medal of the championships in third with 3:06.11 behind Villum who finished ahead of her for the first time in 10 years.

Britain had three of the top four with cross-country champion Penny Forse a close fourth.

Britain did even better in the W55 race which unusually saw a battle between the 400m champion (Virginia Mitchell) and the 10,000m champion (Elms).

Short of races after injury, Mitchell ran a smart tactical race, controlling it throughout and led through 400m in 72.7 with Elms following.

The latter made repeated attempts to overtake but having focussed on longer events this summer lacked the speed to get past the world and European champion who held her off each time and ran wide. In the last 100m, Mitchell kicked to victory in 2:26.29 with Elms second in 2:28.10 taking her sixth medal and 1500m bronze medallist Christine Anthony gained her third in 2:35.03 as Britain gained their first clean sweep of the championships.

The men followed the women and first to strike gold was M75 Winston Laing. Though feeling he had not trained enough and carrying a leg injury, he controlled the race and won in 2:50.07 to take gold by 0.30 of a second from Norway’s Tormod Boenes.

The M60 race was a cracker. Alfredo Bonetti blasted the first lap in 64 seconds with only defending champion Keith McGhie following closely. The 1500m and 10,000m champion Fletcher was some way back but began clawing back some distance as he hit the straight as he led a chasing pack. The Italian’s leg wobbled just before the line and McGhie passed but he was also struggling and fell across the line just as Fletcher, who made up five metres in the last 20, dipped and the latter got the verdict in 2:15.22 to McGhie’s 2:15.32.

The latter had lots of cuts to show for his fall.

In a dramatic finish 10,000m and 1500m champion Paul Fletcher just catches fellow Brit Keith McGhie and Italian Alfredo Bonetti having been a long way back into the straight. The times 2:15.22 and 2:15.32.@emacvenice2019 pic.twitter.com/QAf1vsMqKm

Next up, M55 Andrew Ridley made it a second successive two-lap title and he powered away on the second lap to win comfortably in 2:08.67 from France’s Xavier Lefay.

M50 Dominic Bokor-Ingram then made it three on the trot as he ran a perfect tactical race and was always in a good position and he won in 2:05.01 as he held off 1500m champion Mark Symes who got boxed in the 12-man field and had to come from behind and was second in 2:05.18. 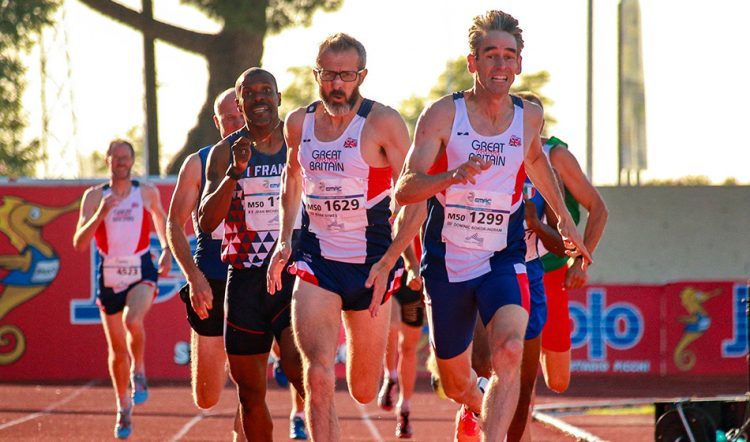 The men’s 5000m races were also in the afternoon in Eraclea and there was an exceptional run from M60 Alastair Walker and the Scot won in 17:08.50 to take gold by a massive 23 seconds from Sweden’s Tore Axelsson.

The clash with the 800m meant Fletcher had to choose between the two events though it did mean Britain won every event from 100m up to 10,000m in this age group, thanks mostly to John Wright and Fletcher.

Also striking gold with a huge margin was M75 Victor Shirley who won his event in 21:45.62 which gave him gold by 47 seconds from Giovanni Melis of Italy. He had previously won here at 1500m.

The pick of the winners was probably Italian M50 Said Boudalia who ran 14:59.70 to go close to the world record though M85 Bruno Baggia won in an European record 24:50.08.

German-based world record-holder Irie Hill was a class apart in the W50 women’s pole vault and won with a 3.35m leap at a time when she was the very last person competing in the stadium, a hour after the track races had finished.

The day after winning the 200m gold, M80 Anthony Treacher won a long jump bronze with a 3.76m lap as Germany’s Willi Klaus took the title with a 3.94m jump.