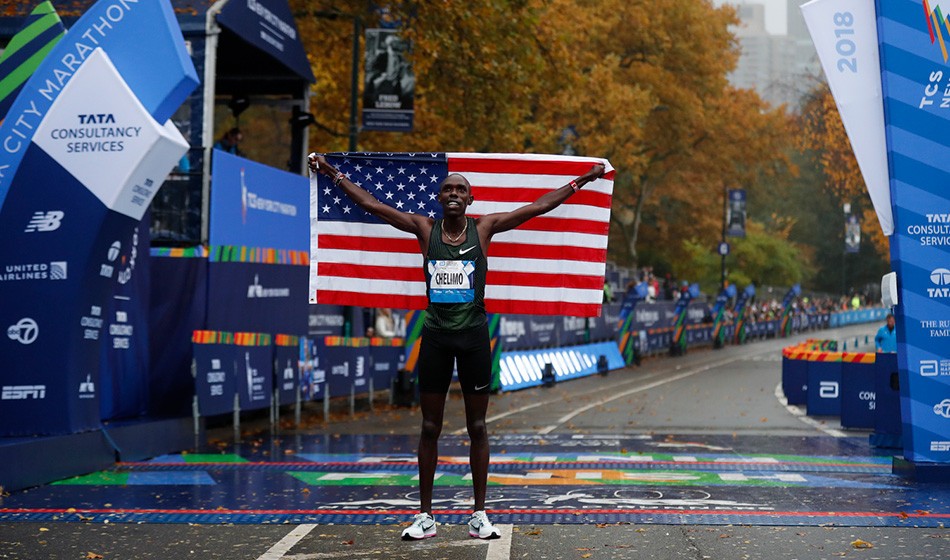 While the TCS New York City Marathon (report here) was the biggest road race event of the weekend, athletes were also in action at the Saucony English Cross Country Relays (report here) and other highlights included the following…

Chelimo, an Olympic silver medalist in the 5000m, won the close men’s race in 13:45, taking one second off the former course record that was set by Nick Willis in 2013.

After finishing as runner-up twice at the United Airlines NYC Half, Sisson won her first race in New York, breaking the tape in the women’s race with a solo sprint to the finish in 15:38.

“It means a lot winning here today,” she said. “I came second the last two times I raced in New York, and both of those races were really good, but to finally break the tape meant a lot to me. There’s something really special about racing here.”

Erika Kemp took second in 15:50 and Olympian Amy Cragg, who was third at the Tokyo Marathon earlier this year, finished third in 15:54.

Over the finish line! With an incredible time of 29.09, Adam Craig is the fastest male runner of the Leeds #AbbeyDash 2018! pic.twitter.com/Y1iaYHbZ8E

In-form Lucian Allison of Lincoln Wellington was third in 29:33 in a quality race which saw 10 men go under 30 minutes and 34 under 31 minutes.

The North of England secured the Tudor Shield team victory, with Dejene Gezium 14th in 30:18, Joe Wilkinson 15th in 30:21 and Nigel Martin 18th in 30:26. Scotland were second and Leeds University combined were third.

The women’s race saw 19 athletes go under 36 minutes, with Fionnuala Ross of Shettleston first in 33:31, Edinburgh Uni’s Mhairi Maclennan second in 33:38 and Stephanie Pennycook third in 33:50.

Claire Duck from the North of England had set the fast pace early on only to succumb to a rib stitch at 7km, finishing fourth in 34:02.

Kilbarchan’s Elspeth Curran was fifth in a PB of 34:18, and she is coached by previous Dash winner and Olympian Lynne MacDougall.

Scotland took the Tudor Shield team victory with North of England second and UK Armed Forces third. The latter were led by Danielle Hodgkinson who was sixth in 34:33.

Ethiopia’s Abrha Milaw and Nurit Shimels claimed victory at the event which sees runners follow a route from Nice down the Riviera to Cannes.

@marathonnicecannes finishing in around 3:27:30 (exactly 3:30:00 on the clock as I went under) The plan to set off with the 3:30 pacer worked well, but the road was so full I ran ahead just a little and settled into 7:50 ish pace per mile. Kept it very even paced all the was and my last miles were my fastest ever in a marathon. Even quicker than when I ran 2:34 in #Chicago. So the moral is #steadypace all the way! Great course, winner ran 2:07, I’m sure the worlds best guys could run 2:02s on here! Thank you #nice thank you @cannesisyours #aurevoir #merci

Ugandan 21-year-old Robert Chemonges broke the course record, clocking a personal best of 2:09:05. Burundi’s Olivier Irabaruta broke the national record with his time of 2:09:47 for the runner-up spot on his marathon debut.

GB ultra running international Beth Pascall followed up her fourth place at the Ultra-Trail du Mont-Blanc by winning this stage race which includes three races in three countries and across two continents – Spain, Gibraltar and Morocco.

England athletes won both the girls’ under-18 and under-16 competitions, through Rhiana Burrell and Abigail Pawlett respectively. Pawlett achieved a score of 3796 points.

» Further coverage and results in the November 8 edition of AW