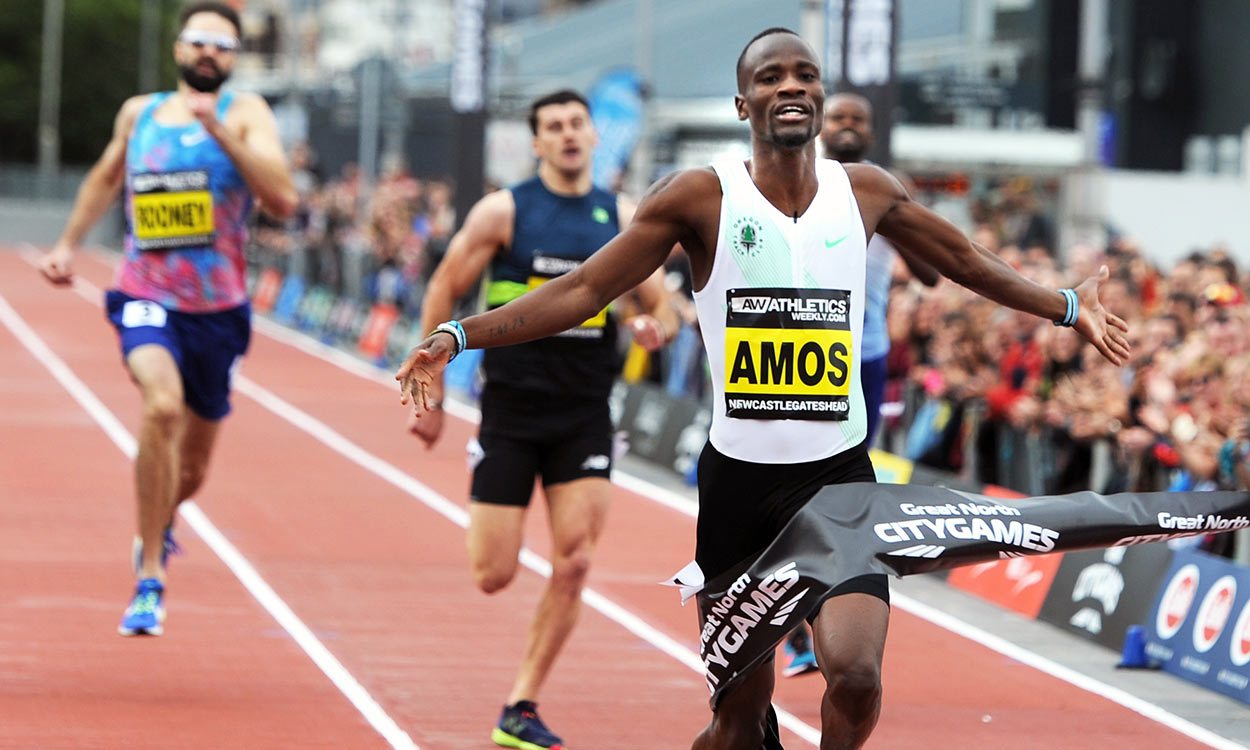 One of the strengths of CityGames meetings is that they offer the chance to try something a little different from the athletic norm and, in the men’s events, it was the more unusual races which stood out for the sizeable crowds who flocked to watch the Great North CityGames action unfold on Saturday.

There was particular intrigue around the men’s 500m and a field which was headed by London 2012 Olympic 800m silver medallist Nijel Amos. The Botswana runner was up against a six-strong British contingent which contained Guy Learmonth and Martyn Rooney – two athletes who had created plenty of interest and had a great deal of fun by promoting their own personal ‘smackdown’ duel on social media in the run-up to the race.

There was light-hearted rivalry between the pair on the start line, too, but when the gun went it was Amos who took control.

His was a dominant win in 59.26 but behind him a fascinating battle was going on. World 800m semi-finalist Learmonth has enjoyed a strong end to his season and he came top of the British pile, taking the bragging rights by finishing second in 60.73, with Dwayne Cowan third in 61.01. World 4x400m bronze medallist Rooney was back in sixth in 61.08 and awaiting news of what his forfeit would be.

“I think over the past few weeks Martin and I have built a lot of hype about this race – we took it upon ourselves and I’m glad the media just rolled with it,” grinned Learmonth.

“It generated a lot of interest and we had a good laugh today – I’ve had a great time.

“This was the perfect sort of race to do it at. Hopefully we’ve started something and that there will be a few more head to heads like this. It can really promote the sport.”

Since becoming a world champion as part of the gold medal-winning 4x100m quartet last month, Nethaneel Mitchell-Blake has been having to get used to lots of new experiences as his profile continues to rise.

Tyneside was the venue for yet another one as the 23-year-old sampled street athletics for the first time and also made his racing debut over 150m.

Mitchell-Blake was up against fellow countryman Harry Aikines-Aryeetey, the evergreen Kim Collins of St Kitts and Nevis and USA’s Ameer Webb.

“It was my first time running the 150m and I came through the 100m mark too slow, but I said to myself come out of the race healthy and have fun with it – and that’s what I did,” said Mitchell-Blake, who has raced over 50 times during the course of 2017. “It’s all about the occasion, the atmosphere and giving the sport a bit of fun.”

Jonnie Peacock’s life has also changed a great deal since he burst on to the public consciousness with his Paralympic exploits in 2012 and 2016 – and he will now take a year off from the sport.

His appearance on the new series of Strictly Come Dancing is only going to make his name more familiar in more households and he signed off a World Championship-winning season with an utterly dominant win in the IPC T44 100m.

Another British athlete attracting increasing attention is Andrew Butchart, who made a fast start in the men’s mile as he looked to dominate from the gun.

However, he was overtaken in the final third of the race as Australian Jordan Williamsz won the battle to hit the line first, coming home in 4:05.88 ahead of Britain’s Elliot Giles (4:06.17) and Poland’s Marcin Lewandowski (4:06.67). Butchart ultimately finished seventh in 4:10.07.

“Awesome,” was how Williamsz summed up his CityGames experience after following a route which took the competitors from one side of the river to the other. “It was such a good atmosphere the whole way.”

The CityGames action had begun with the men’s pole vault, which was won by Finland’s Urho Kujanpaa. His clearance of 5.45m on his final attempt secured the victory, with France’s Stanley Joseph and another Finn, Tomas Weckston, finishing second and third respectively after both vaulted 5.30m.

» Full results can be found here, while next week’s AW magazine will include further reports, pictures and results