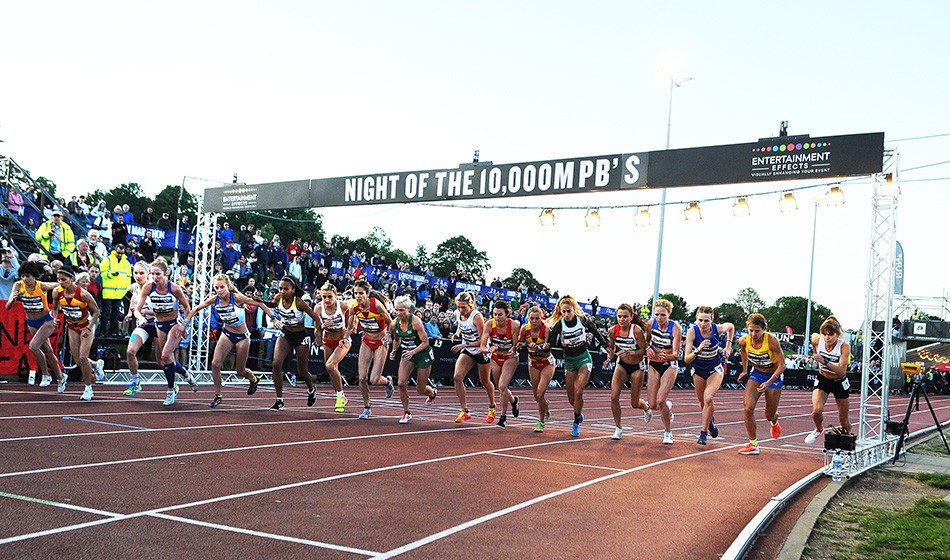 A guide to the 10,000m festival in London, including race previews, timetable and TV listing

One of the most popular events on the calendar, the Highgate Harriers Night of the 10,000m PBs returns on Saturday, hosting the European 10,000m Cup for the second successive year, writes Paul Halford.

The special atmosphere, boosted by free spectator entry, will no doubt once again propel the runners, whether elite or good club level, to fast times.

Although last year’s men’s winner, Richard Ringer of Germany, has pulled out to race in Lausanne instead, Lonah Salpeter is back to defend her women’s title.

The Israeli won last year with 31:33:03 but is clearly capable of better than that national record, given her recent half-marathon and marathon times of 66:09 and 2:19:46.

Britain’s team is headed by Eilish McColgan, who is in the form of her life after setting PBs last month over 1500m and 5000m.

Although not on the British team, Steph Twell ought to figure highly too.

Alice Wright will line up for Britain, having missed the Doha selection standard of 31:50 by just six seconds in Palo Alto, while Sarah Inglis is on the team after her 32:11 performance last month. Charlotte Arter, Mhairi Maclennan and Verity Ockenden complete the sextet for the defending champions.

Portugal will have a strong and experienced team, with Ana Dulce Felix having run below 32 minutes this year.

The full women’s A race entry list, featuring eight women who have run inside 32 minutes for 10,000m, can be found here.

On the men’s side, European champion Morhad Amdouni of France will be looking to step up from silver last year. Also making a return will be Italy’s European bronze medallist Yeman Crippa, who was third here last year.

Norway’s former European marathon record-holder Sondre Moen should improve on his PB of 28:15.12.

The in-form Nick Goolab heads Britain’s team after clocking 28:22 on the road this year and he is making his debut at the distance on the track.

Former European 10,000m silver medallist Chris Thompson will not be wearing a GB vest but will expect to be challenging for the top domestic places.

GB’s team chances as they take on defending champions Spain have been hit by the withdrawals of Dewi Griffiths and Marc Scott, but Jack Gray and Andy Heyes take their places, while Ben Connor, Matt Leach and Adam Hickey complete the team. The Doha selection standard of 27:40 will be a tough proposition, though.

The full men’s A race entry list, which includes seven men who have run sub-28 minutes for 10,000m, can be found here.

Eight races are scheduled, with a live Q&A with Liz McColgan, Bram Som and Andy Vernon just before the championship races.

For the first time, the event will use electronic pacemaking technology, with ‘WaveLight’ giving athletes and spectators a pace guide via moving lights which will line the inside of the Parliament Hill track and can be set to any required racing time.

“I’m over the moon to bring WaveLight technology to our 2019 event,” said event director Ben Pochee. “It continues the tradition we’ve established at the Night of the 10,000m PBs of innovating track distance running.

“The WaveLight technology will enable us to add another level of spectator engagement and help bring to life the full story of each race.”

Vinco Sport will be showing a live stream of the action from 2.15pm here.

Coverage will also be shown live on the BBC Sport website here from 8.30pm.

We’ll be at Parliament Hill reporting on the action, so be sure to keep an eye on our social media channels and website, plus we’ll also have a stand at the 1500m start, so come and say ‘hi’!