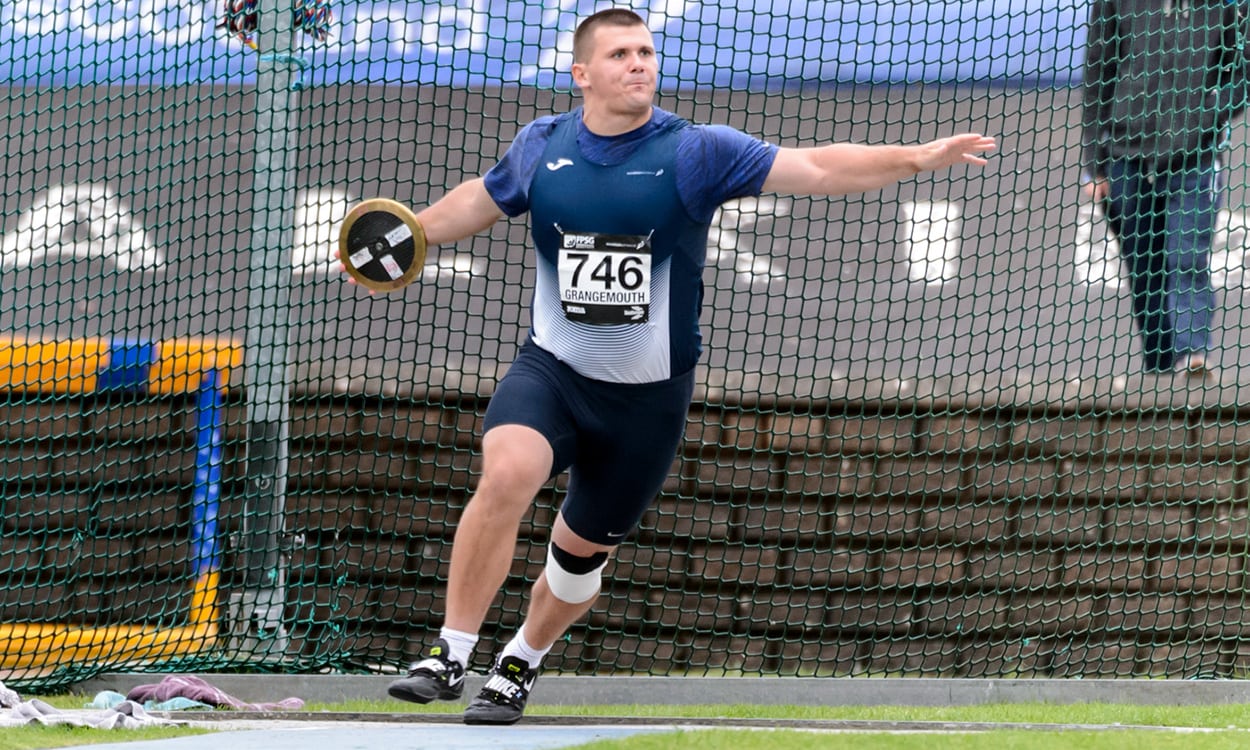 Click here for European Championships reports, while full coverage will be included in our August 16 magazine.

Two days of competition concluded with a final event performance from thrower Nick Percy which claimed the £2000 prize pot all to himself.

The Glasgow 2014 Commonwealth Games athlete pitched out to 59.87m in the discus shortly after 5pm on Sunday to go beyond the 59m asked in the standards set by Scottish Athletics to try and encourage better athletes to compete at Grangemouth.

Medals had come and gone in a whole string of other events without too many really going close to the prize pot standards – with the wet and windy conditions on Sunday counting against the likes of GB internationals Kirsten McAslan and Neil Gourley after European Championships throwers Chris Bennett and Kirsty Law had fallen short on Saturday.

“I’m delighted to win the money and actually it will help me for next year because I am going back to college in Nebraska but have no eligibility left so will be funding competitions independently,” said Percy, who took the title with his third-round effort.

“I’d have thrown it further if the wind had been in the other direction. But I’m happy with it as it is my best performance for a few weeks and I’ve a slight knee injury. That was the last event of the season for me.”

A few minutes earlier Gourley had held off the strong challenge of Sol Sweeney to win the 1500m title in 3:48.86 – his first senior gold in Scotland, having been in America for the past couple of years.

Gourley opted to race after just missing out on GB selection for the European Championships in Berlin after taking third in the trials and third in the Athletics World Cup in London on his debut GB senior appearance.

“I wanted to try and win a Scottish title and that was a reason for coming here, even before thinking about any £2000 prize pot,” he said.

“I’m due to race the Diamond League 1500m in Birmingham next weekend and would love to do that but I do need to chat to my coach about a slight hip/glute injury. I’d want to be able to run my best at that kind of level before definitely decision to race.”

Jamie Williamson and Mhairi Hendry won the two 800m titles while there were titles retained by Lauren Stoddart in the 3000m steeplechase and Kelsey Stewart in the 400m.

In the men’s 400m final, there was a win for visiting athlete, Sadam Kuomi, of Birchfield Harriers, as he headed silver medallist Grant Plenderleith, with the winning time at 47.30.

Scott Lincoln held the CBP in the shot having won at Grangemouth last year with 18.80m and he improved that again this time with 19.10m. Unfortunately for the City of York athlete, the prize pot only applied to those athletes eligible to compete for Scotland.

McAslan flew in from Germany after reaching the 400m hurdles semi-finals at the European Championships to try and chase the 57.50 standard. That looked a mission improbable given the conditions but McAslan gave it a decent effort and won her first Scottish senior gold with a run of 58.89.

Murigi ran 2:57:55 for a victory of more than three-and-a-half minutes ahead of Germany’s 2016 winner Michelle Maier.

This event saw some of the British athletes heading to the WPA European Championships in Berlin in action.

Many championship records were set during the three-day event in Toronto.

In the women’s 100m hurdles, USA’s world record-holder Kendra Harrison ran 12.55 to improve the championship record of 12.66 which she had set in the semi-finals.

USA’s Jenna Prandini won the 100m in a championship record and season’s best of 10.96, while Jamaica’s Shelly-Ann Fraser-Pryce, continuing her comeback after having her first child, was fifth in 11.18.

» Further coverage and results in the August 16 edition of AW