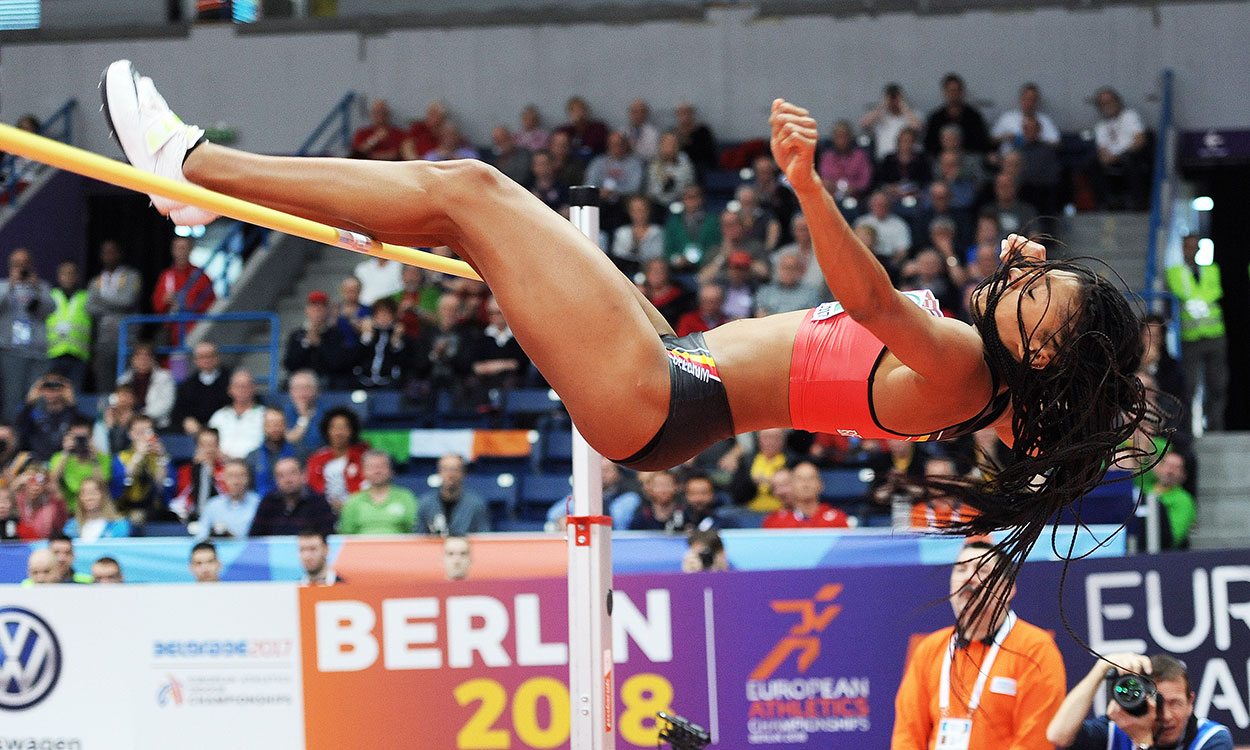 Belgium’s Nafissatou Thiam had an incredibly strong start in the pentathlon on the first morning of competition at the European Indoor Championships in Belgrade.

The Olympic heptathlon champion began with a 8.23 PB in the 60m hurdles to take an immediate lead and she strengthened that advantage by a huge 117 points as she cleared an indoor PB and European Indoors pentathlon best of 1.96m in the high jump.

After two events she led on 2261 points, with Austria’s Ivona Dadic a distant second on 2095 points.

In the final event of the morning session, Thiam increased her lead to 257 points as she threw a near PB 15.29m in the shot.

With a 6.50m long jump and 2:15 800m, Thiam could score 5041 points, which compares to the Championships record of 5000 points set by reigning champion Katarina Johnson-Thompson, while the European and world record is 5013 by Natalya Dobrynska.

Britain had a generally successful first morning of competition. In the women’s 3000m, favourite Laura Muir had her supporters worried as she made no attempt to gain an automatic spot in qualifying. Conserving energy for her later 1500m heat, she instead settled for a fastest losers spot in fifth in 8:55.56, though she gained a qualifying spot by over four seconds.

The heat was won by Turkey’s double European champion Yasemin Can in 8:52.33. Steph Twell was an untroubled second in 8:55.02. Eilish McColgan also qualified comfortably finishing second in her heat in 8:57.85.

In the women’s 400m, both Britons competing won their heat. Eilidh Doyle won heat three in 53.28, while Laviai Nielsen won heat four in 53.74. Lea Sprunger of Switzerland was easily fastest, winning heat one in 52.55.

Laviai’s twin sister Lina withdrew from her heat with a grade two stress response on her fibula.

Shelayna Oskan-Clarke controlled her 800m heat to win narrowly in 2:06.02. The fastest times were set by medal favourites Anita Hinriksdottir of Iceland with 2:02.82 and Selina Buchel of Switzerland with 2:03.11.

Kyle Langford set out to control his heat in a similar manner but lost his position and was only fourth as they came into the straight but a late sprint won him the heat in 1:49.93.

Guy Learmonth front ran more successfully, leading purposefully until around 700m. He was still second as Adam Kszczot sprinted to victory as they entered the straight. However, he was passed in the final 30 metres and finished fifth in 1:48.73, missing a fastest losers spot by just 0.05 of a second.

Rachel Wallader was sixth in the shot qualifying after round one with a 17.20m throw. She dropped to ninth after the second round as she threw 16.99m. In the final round she improved to 17.35m which briefly put her eighth but she ended up tenth, 27 centimetres off qualifying.

The Briton said: “Those throws are the best three I have put together in a three throw competition, so I’m gutted that it wasn’t enough.”

European leader Pamela Dukiewicz of Germany was fastest in the women’s 60m hurdles heats with 7.86.

Serhiy Nykyforov of Ukraine leapt a European-leading 8.18m in long jump qualifying. No one else jumped eight metres. Dan Bramble, who started with a foul, then jumped 7.64m to lie 12th after two rounds.

A further no jump kept him 12th. Only the top eight qualify and a 7.72m was required.

There were sadly no Britons competing in the 400m where Denmark’s Benjamin Lobo Vedel was fastest in 46.65. World indoor champion Pavel Maslak of the Czech Republic won his heat easily in 47.57 and remains a big favourite.

» Full results can be found here, with updates on the @AthleticsWeekly twitter feed