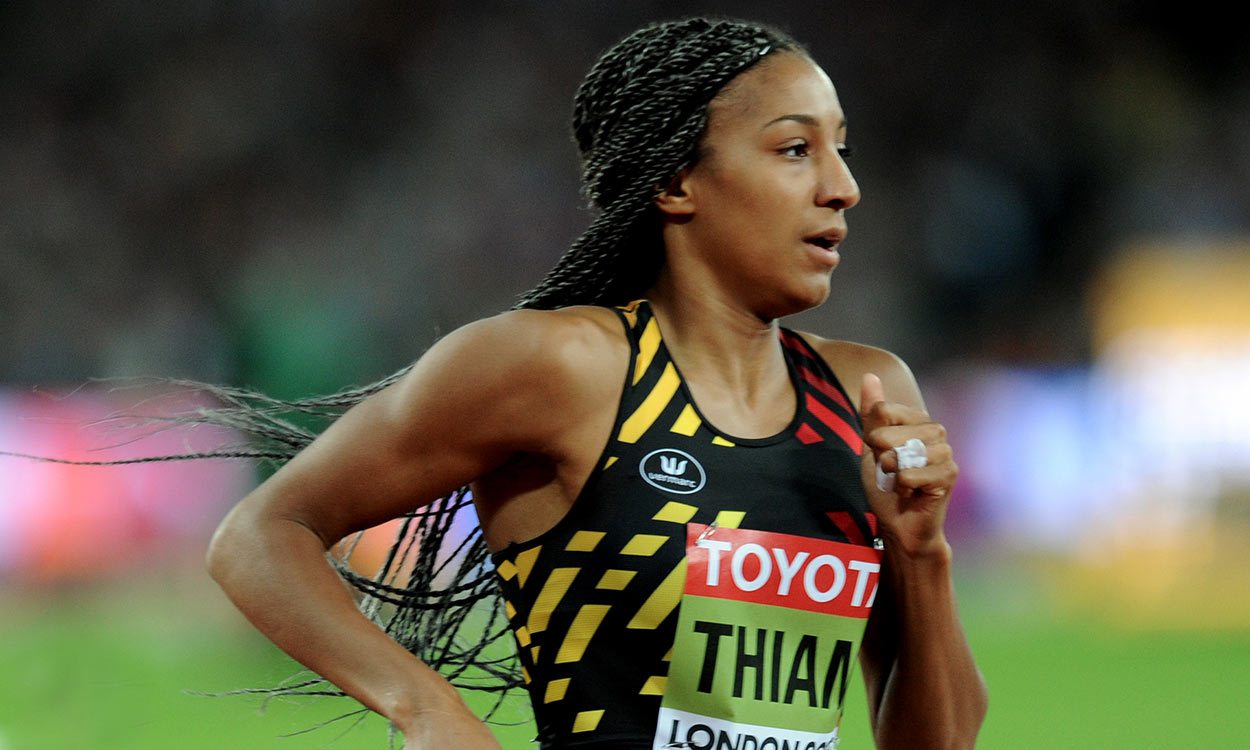 Nafissatou Thiam showed she is still very much the heptathlon force to be reckoned with after adding the IAAF World Championships crown to her Olympic gold from Rio.

The Belgian entered day two of competition sitting 20 points behind Germany’s Carolin Schafer but she responded immediately in the long jump to regain control before well and truly taking a grip of proceedings after the javelin.

It meant Thiam entered the final event, the 800m, with a 172-point advantage and despite only being faster than two competitors on the track she ended the night with a winning tally of 6784, Schafer recording 6696. Dutch athlete Anouk Vetter produced a national record of 6636, the highest total ever to land world bronze, while Yorgelis Rodriguez of Cuba had to settle for fourth in 6594.

Katarina Johnson-Thompson finished on a high with a strong 800m yet came fifth in 6558 – the disappointment of her poor high jump the previous day proving to be so costly.

For Thiam, after the performance which launched her into the global consciousness in Brazil last summer, not to mention the fact that she burst through the 7000-point mark in Gotzis earlier this year, expectation now follows her wherever she goes.

While she hasn’t quite been at her imperious best in London, the 22-year-old still produced more than enough to get the job done in the UK capital.

She could barely have started the day better, either, putting clear daylight between herself and her rivals when leaping furthest in the long jump thanks to a season’s best of 6.57m.

Johnson-Thompson’s response to the disappointment of day one was to land 6.56m, which took her into third place overall at that point.

Vetter also went further than she has all year with 6.32m in fourth, while Schafer secured 6.20m.

When it came to the javelin, Thiam simply pulled further away thanks to a throw of 53.93m.

She was not top of the discipline, however, as Vetter produced a 58.41m championship best that all but secured her a medal, while Schafer threw 49.99m and Johnson-Thompson landed a season’s best of 41.72m but fell to fifth.

Thiam needed to worry little about the 800m, a discipline in which Johnson-Thompson produced another season’s best by running third-fastest overall in 2:08.10, and came home in 2:21.42.

“It was a really difficult year, with a lot of pressure but I managed to produce a great performance,” said Thiam.  “The thing with sport is, it doesn’t always pay off when you work hard and you’re never really sure if you’re going to produce something great. I’m doing great things at the moment but I know hard times are going to come at some point, they do for everyone.”

Johnson-Thompson knows that better than most, but insisted she was upbeat despite another case of what might have been.

“I’m feeling good,” said Johnson-Thompson, who will now turn her attention to the individual high jump competition which begins on Thursday. “What I have learnt is to have a bit of a change of attitude. I want to try and bounce back from disappointment and give it my all. I have tried to do that in the past but I have probably been a bit defeatist in my attitude. I have tried to move on from the high jump yesterday but it is difficult. I feel like I will look at where I might have been if that had gone well.”

She added: “In general the high jump is an event that I am not really worried about or concerned about. The long jump is something I did worry about and I still have flashbacks to Beijing (2015 World Championships where she fouled three times) to this day and that is why I was so pleased when the official looked at the board on the first jump and didn’t raise the red flag.

“I am at ease with the high jump. It was just a freak accident with what happened here.”