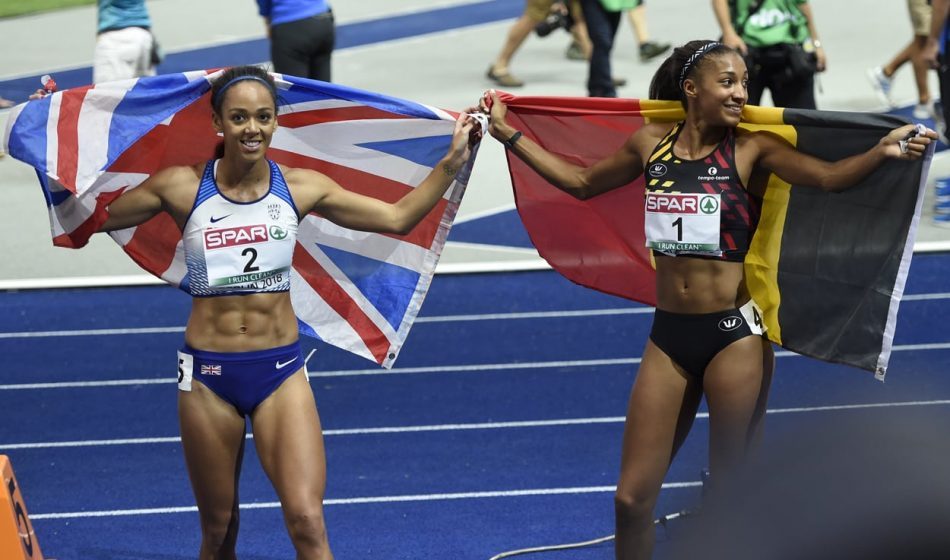 Nafissatou Thiam added the European heptathlon title to her world and Olympic wins but it was far from clear-cut.

The Belgian claimed victory with a world-leading score of 6818 points but pushing her all the way was world indoor and Commonwealth champion Katarina Johnson-Thompson, who showed her best ever form outdoors to smash her PB with a score of 6759 points.

To snatch the overall title from Thiam, she would have needed to beat her by 14 seconds but the margin was just over nine as a laboured Thiam ran 2:19.35.

The Briton had beaten Thiam in four events and been equal in the high jump but lost 454 points in the two throws despite two very good performances by her own standards.

.@JohnsonThompson did the country proud during her sensational performance in the heptathlon! pic.twitter.com/e0gVI7PP83

“It’s nice to become European champion,” said Thiam. “The two days have not been easy and I had to fight with the competition and myself. I really needed that big throw in the javelin.”

Johnson-Thompson said: “I’m really happy and pleased with the performances. I’m happy with the whole attitude, the whole heptathlon, my progression and the fact that I feel like I’m on to something.

“I’m satisfied with the performance but I definitely want more. I believe in myself and this is going to be good for me moving forwards.”

Britain expected a medal in the 400m hurdles but most eyes were on former champion and semi-final winner Eilidh Doyle. However, with one of the best British performances of the championships, Meghan Beesley, who was drawn in lane one and only qualified as a fastest loser, enjoyed the race of her life to score a shocking bronze.

The British champion attacked from the off and was actually leading at 200m. She looked to be paying for her aggression on the final bend and drifted back to third but she kept her form superbly and had four metres to spare at the finish.

Her mark of 55.31 was down on her heat time but that hardly mattered to the athlete who works for results website Power of 10. 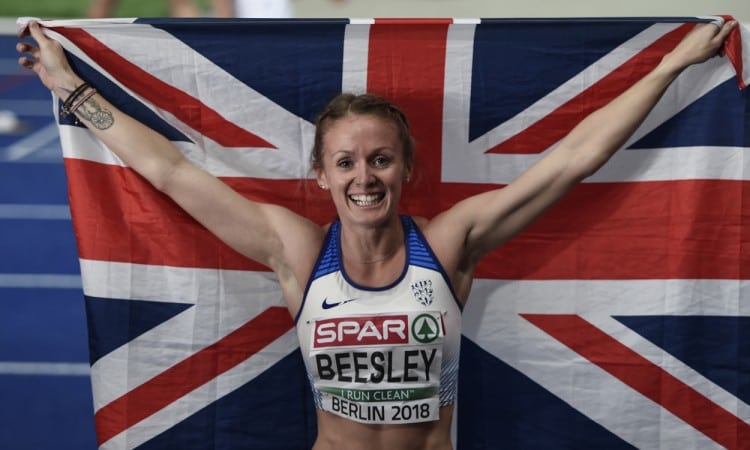 “I knew that because I’m short, running in lane one would help with my stride pattern!” she said. “So I knew I had to commit but I do think it helped me.

“I just thought I’d go for it and my coach told me to 100 per cent commit and then give it everything I’ve got and put it to the max.

“It’s the first final I’ve got to for GB so I just thought ‘this is my time to prove that I can perform well in finals’.”

Ahead of her, as expected, it was Lea Sprunger who won gold.

Sprunger takes gold but what a run from @meghanbeesley to take bronze! pic.twitter.com/CaETyRQiWY

Anna Ryzhkova of Ukraine was second in 54.51 and only the first two ran quicker than they had in the semi-finals. Hanne Claes of Belgium was fourth in 55.75.

Doyle, who looked a likely medallist herself at 300m, paid for the lack of races after injury and faded badly, finishing a very disappointed eighth in 56.23.

Dina Asher-Smith looks on course for a sprint double as she ran an effortless 22.33 in her 200m semi-final, which is 0.25 quicker than the next fastest who was fellow 100m finalist Jamile Samuel, who clocked 22.58.

The 100m bronze medallist, Dafne Schippers, was third-fastest when she won her semi-final in 22.69 easing back.

There will be three Britons in the final. Beth Dobbin had to fight hard to move past Sarah Atcho to grab second in her heat in 22.84, with Atcho missing out on a final place despite a 22.88.

Bianca Williams was a slightly faster 22.83 in finishing third in Asher-Smith’s semi and made it through as a fastest loser. Jodie Williams missed out after clocking 23.28.

The Russian, competing as an authorised neutral athlete, was perfect clearing heights of 1.87m, 1.91m and 1.94m but only managed 1.96m at the second attempt and the German crowd were getting very excited as Marie-Laurence Jungfleisch cleared it first time to hold the lead.

The German was unable to clear 1.98m, though, while Lasitskene soared over on her first attempt. The double world champion also went over 2.00m at the second attempt.

She was joined at that height by Bulgarian Mirela Demireva, who guaranteed the silver medal with a third-time clearance. Both the top two failed at 2.04m and Lasitskene won on countback.

Morgan Lake finished seventh. She cleared 1.82m and 1.87m first time but only got over 1.91m at the second attempt. She had some close attempts at 1.94m, but would have needed to have gone even higher than that to finish in the top six.

Three Britons ran in the 800m final but there were no medals as the first two was a repeat of the 2016 final with Nataliya Pryshchepa winning from Renelle Lamote.

It was a scrappy race and Shelayna Oskan-Clarke was marginally ahead at 400m in 59.25.

Her conqueror in the 2017 European Indoor Championships, Selina Buchel, pushed ahead on the second lap and briefly it looked as if Switzerland could win another title after Sprunger’s success.

As she hit the final straight with Oskan-Clarke and Lynsey Sharp well placed too, all the action came from the outside and the three who had been at the front tightened up and faded back.

The winner said: “It was much harder here. There is more pressure defending.”

On a great day for Ukrainian 800m running, they also gained bronze through Olha Lyakhova’s 2:00.79.

Adelle Tracey, who some had thought fortunate to gain the third spot in the British team, easily proved the best of the Brits. After getting slightly boxed, she found a gap on the inside and finished full of running but just failed to catch Lyakhova with a time of 2:00.86.

“I was just waiting for that space to open up, but that comes down to my experience, and I think though this is a really tough lesson to learn right now, hopefully in the future it will just help me position myself better.”

Germany have been the most successful country in recent years in the javelin but there was a shock in how easily Christin Hussong won the gold.

The former world youth champion, who was 12th in the Olympics and a non-qualifier in the World Championships, opened with a huge championship record 67.90m and killed the competition stone dead.

Czech Nikola Ogrodníková opened with a throw of 61.85m and that astonishingly held on for silver despite being six metres adrift of the winner’s mark.

The German only had two other throws measured – a 62.53m second round which would still have been good enough for gold and a final throw of 59.15m once gold was confirmed.

In a poor competition, winner aside, Lithuania’s Liveta Jasiunaite took bronze with a 61.59m fourth-round throw. Only the first six broke 60 metres.

It wasn’t the greatest of series but Paraskevi Papachristou was a clear triple jump winner.

With a reputation for third places, the Greek had won bronze at the last Europeans and the 2016 world indoor and 2017 European Indoor Championships, but a 14.60m second jump was never really challenged.

On a good day for Germany, Kristin Gierisch, herself with more success indoors having won the 2017 Europeans and come second in the 2016 world indoors, took silver.

Spain’s Ana Peleteiro was only a centimetre back in third as just eight centimetres covered the second to fifth places.

Naomi Ogbeta, who had excelled to make the final, was unable to repeat her qualifying form. Her best was her 13.94m opener and she finished 12th.